I watched this year as several people who’d never been to Telluride before experienced the classic Telluride conversion: walking around the picture-perfect (in more ways than one) little town, dwarfed by the majestic Rockies, where the most difficult decision—and it can be difficult indeed—is what screening to choose from among as many as nine or ten tempting alternatives, five or six times a day. The Telluride newbies are blissed out.

I still get blissed out at Telluride, too, after a decade. (As do the people I sit next to who proudly tell me that they’ve been there for all 43. A fact that manages to come out within ten seconds of saying hello.)

The 17 I managed to see were very different from the perfect festival one imagines when first perusing the lineup: heavier on the mainstream Hollywood tip than the arty French, for example—I saw “Arrival,” “Bleed for This,” and “Sully,” because of vagaries of scheduling, and not the highly-anticipated Francois Ozon’s "Frantz" and Mia Hansen-Love’s "Things to Come."

People often emerge from their festival haze surprised at how strong the documentary titles were. But I only managed to see two: the stirring, beautifully-photographed, heroically feminist “The Eagle Huntress,” about a 13-year-old who becomes the first woman in 12 generations who hunts with an eagle in her Mongolian nomadic tribe. The screening improved not only by the presence of the filmmaker and the huntress herself, with her mother, father and (local) eagles, but also a brief featurette that revealed the actual difficulty of the stunning photography, which was so flawless in execution that it looked misleadingly easy.

The only other documentary I saw was “Gentleman Rissient,” which belongs for me to its own sui-generis genre, movies about movies.

In fact, when asked which were my favorite movies of the festival, I alternated between two answers: “La La Land,” which astonished and delighted me with its audacious turn on the classic Hollywood movie musical; or, if I felt more paradoxical, I’d say, “My favorite movie at Telluride is one I saw in Bologna, Bertrand Tavernier’s three-hour-and-ten-minute ‘My Journey through French Cinema,’ which I wish I had time to see again here.”

Like “Gentleman Rissient,” in which the famed producer’s rep awakens lust for moviegoing with his advocacy for everything from the 4 Aces of the MacMahon repertory movie theater in Paris (Losey, Lang, Preminger, Walsh) to the latest cutting-edge, foreign director, Tavernier’s epic makes you want to see movies, the movies he loves. Dangerously so: in Bologna, where programs are often not repeated, I was initially glad to see that they’d programmed an homage to Jacques Becker, most films I’d already seen, therefore opening up many slots (I thought). But Tavernier’s long Becker section led me to re-watch many of them, as well as to see “Montparnasse 19”—not one of his best, but how bad can a movie starring the beautiful Gérard Philipe and the beautiful Anouk Aimée be? I understand Godard and Truffaut’s Freudian need to kill their fathers when they were giving birth to the Nouvelle Vague, but thank God for the cinéma de papa (and the tradition de qualité) that Tavernier is around to rehabilitate it.

He is currently working on eight additional hours for television, covering more of his French favorites. “And I wish I had ten,” he told me. “Maybe you will,” I said. 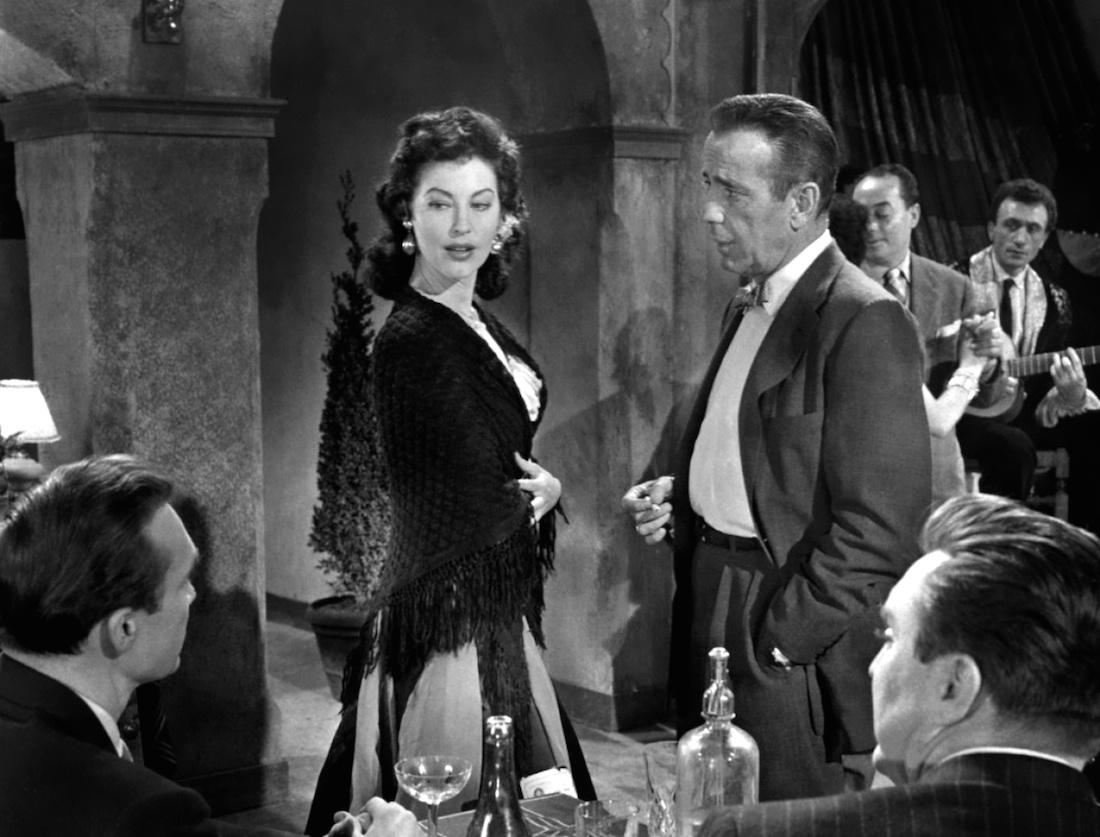 Another cinephilic auteur, Volker Schlöndorff (who began his career in France as an assistant to Louis Malle, Alain Resnais, and Jean-Pierre Melville before returning to make his own films in his native Germany), was an inspired choice as this year’s Guest Director in Telluride. His six selections were fascinating: films by his mentors (Malle’s “The Fire Within,” Jean-Pierre Melville’s adaptation of Cocteau’s “Les Enfants Terribles"), as well as Joseph Mankiewicz’s “The Barefoot Contessa" (pictured above), which had seemed kitschy to him when he first saw it at the age of 16, but proved influential over the years: “Kitsch or not, Ava Gardner, with her shoes off, haunted me into my 30s, and Humphrey Bogart’s portrait of a director may well have been my role model. I certainly followed his rule never to get involved with the leading lady, and to always go to bed early when directing. Only now, 60 years later, did I dare make a movie just to celebrate a woman, Nina Hoss, barefoot on a beach” [i.e., the forthcoming “Return to Montauk,” co-starring Stellan Skarsgård and Niels Arestrup].

He also showed Fritz Lang’s influential 1928 silent “Spies,” starring the incandescent Gerda Maurus, accompanied on piano by the gifted Donald Sosin. Shown in the intimate setting of the 1913-vintage Sheridan Opera House, it was a lovely pendant to the Pordenone-sponsored showing of fellow German E.A. Dupont’s 1925 film “Variety,” starring Emil Jannings and Hungarian vamp Lya de Putti as two-thirds of a love triangle of circus acrobats, shown in the sci-fi themed 500-seat Galaxy Theater, accompanied by the witty and percussive Alloy Orchestra.

Schlondörff’s most unusual and idiosyncratic choices were the twinned WWII stories of the Red Army’s march into Germany, the East German “I Was Nineteen” (1968), by Konrad Wolf, and the U.S.S.R.’s “It Was the Month of May” (1970), by Marlen Khutsiev. Wolf, born in Germany, was brought up in Moscow, served in the Russian Army and made more than a dozen films in East Berlin before dying at 56. Marlen (named for MARxLENin) Khutsiev is still working in Russia. I’d never heard of either of them, and was so taken with “I Was Nineteen,” in which the war’s end is confusing, brutal, ironic, messy, and ultimately unsatisfying, that I returned the same day to see “It Was the Month of May,” an altogether more bucolic film in which a bunch of Russians lollygag around a German pig farm. I was jolted by its delirious last ten minutes of montage, juxtaposing late-60s German dollybirds in miniskirts with concentration-camp stills and tourists visiting Holocaust memorials.

A surprise addition to Telluride’s last day was a rare screening of Schlöndorff’s “Voyager” (1991), with Sam Shepard, Barbara Sukowa and Julie Delpy in a disturbing and involuntary love triangle, based on Max Fritsch’s Homo Faber, adapted by the legendary Rudy Wurlitzer—but re-written, Schlöndorff told us, by Shepard during the filming—“he gave lines to other people, and took them away from himself.” Shepard also complicated the glamorous multi-location filming because he refused to travel by plane, and frequently misplaced his passport. But he was worth it—his lanky Western allure complemented Delpy’s girlish radiance.

Immediately afterwards, in the same compact theater, Le Pierre, named for Pierre Rissient, perhaps a hundred Telluride die-hards were treated to the most unusual film of the weekend: an unbelievably beautiful restoration of director Karel Zeman’s sui-generis Czech film “The Fabulous Baron Munchausen” (1962), an original hybrid of live-action and animation, that clearly influenced both the collage animation work that Terry Gilliam did for Monty Python’s Flying Circus and Gilliam’s own Munchausen film. I’d never run across Zeman’s work before, and now I want to see anything else I can. (Telluride director Tom Luddy says there’s an equally stunning new restoration of Zeman’s 1958 “The Fabulous World of Jules Verne”).

But, while we were watching this rare 54-year-old oddity, others scattered across Telluride at the same time were equally beguiled and delighted by a new German father-daughter comedy, a documentary about John Coltrane, the newly-restored "Pagnol" 1930s trilogy, Richard Gere in an Israeli film set in big-money Manhattan. Every year eager cinephiles climb the Rockies in search of a cinematic high and for 43 years they’ve been greeted with not only the shock of the new, but the best of the past, the unusual, the forgotten.