With the winners of the 2016 Sundance Film Festival's main competitions to be announced 7pm MT Saturday January 30, we've got the last batch of reviews for our complete coverage of the prestigious US Dramatic Competition. This trio includes writer/director debuts—"Tallulah," recently picked up by Netflix, "The Intervention," recently picked up by Paramount, and the comedy "Joshy." Though different in style, tone and genre from their competitors, these indie dramedies are going up against the likes of "The Birth of a Nation," "Spa Night," "As You Are," "Swiss Army Man" and more.

“Orange is the New Black” writer Sian Heder makes her directorial debut with “Tallulah,” a narratively ambitious story about mothers of various degrees of parenting skills. She finds a wayward way to this type of story, centered around a stolen baby and three women. Ellen Page plays Lu, a woman who lives in her van with her boyfriend Nico (Evan Jonigkeit), not having any responsibility about her actions. When he ditches her after a fight about their life priorities, Lu heads to New York City to scrounge for food, and get money from Nico’s estranged mother Margo (played by Allison Janney).

While stealing leftovers from room service outside different apartment doors, Lu is recruited by hot mess housewife Carolyn (Tammy Blanchard) to come inside and watch her baby while she goes out. When Lu is left with the kid and sees the unsafe living conditions, Page’s character takes the baby back to Margo’s apartment, claiming that the baby is her own, hoping to leave it there and take some of Margo’s money on the way out. Once Carolyn finds out that the baby is gone, she sets off on a citywide search, while Lu tries to maintain the charade to her new friend in Margo.

Heder’s story often relies on flimsy logic, creating a cringing effect during the investigation whenever someone looks at a newspaper but doesn't see Lu’s face. It creates a tension that, although it puts the story in motion, distracts from the ideas about why people become mothers. You're waiting for the other shoe to drop, and then also trying to take in the unexpected connection between Lu and Margo. Heder creates a minor thriller out of it essentially, (especially for anyone sensitive about how babies are taken care of), but that proves to be a device most of all to put their bond on a time clock.

The casting of Janney and Page can be a tiny bit loaded, considering that the two were so strong in previous Ellen Page pregnancy hit, “Juno.” But Heder's movie is able to chug through this aspect as the story focuses on the characters exploring their commitments of motherhood, the type of privilege it is to have and care for a child. The two are messed up in various ways, but bond unexpectedly. Individually, they have great moments too—Janney has a truly emotional bit with a turtle, and throughout, Page captures a restless sense of having no one and nothing.

The runaway performance of the film comes from Blanchard, who, within a fantastic introductory scene, is able to demonstrate the dangerous nature of a mother who has lost focus of everything outside herself. She whips up a tornado of stress in just one interaction with Lu, far more tragic than anything else, especially as she ping-pongs between pressures to look great for others while not caring whether the naked baby makes a mess on the carpet.

When introducing the film, it was revealed that Heder was around six months pregnant when “Tallulah” was made. It was also shared that when she received the call about the festival's acceptance, her reaction was essentially "Cool ... I have a baby on my boob." Heder's film is necessarily and unabashedly about this physical commitment to this life-changing event, and conveys that vividly in an albeit rickety story. In its greatest success, it is able to translate—or feels like it, at least to this reviewer—the incomparable, intangible stresses of sacrifice within motherhood through filmmaking. 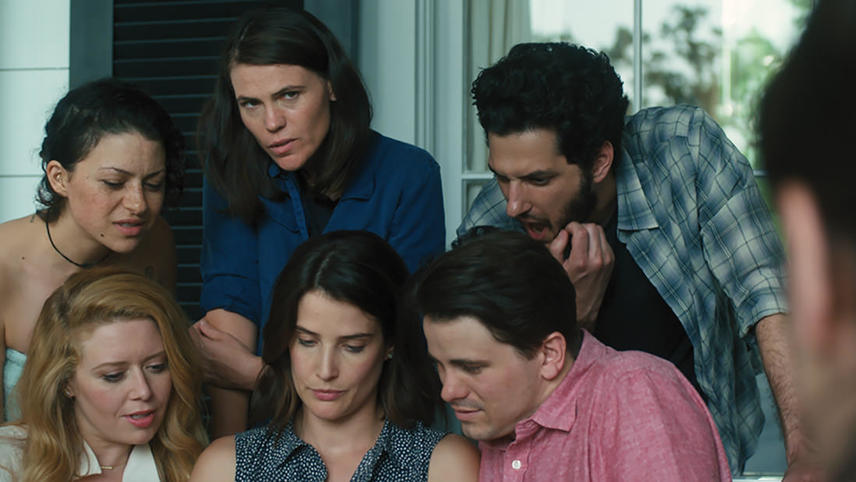 The set-up of Clea DuVall's directorial debut "The Intervention" is funny by itself, and the wry dramedy wastes no time in cutting to the chase. A group of friends have gathered at a family's giant cottage to tell another couple (played by Cobie Smulders and Vincent Piazza) they should get divorced. It may not be the group's place to speak, but the catastrophe has gone on too far. The story gets past its title event quickly too (it doesn't go according to plan), and it becomes about the things everyone else in the house needs to share to their significant other.

For example: Annie (Melanie Lynskey) needs to talk to her fiancé Matt (Jason Ritter) about why they've delayed their wedding four times; Jessie (DuVall) needs to level with her girlfriend Sarah (Natasha Lyonne) about her fantasies; Ben Schwartz’s Jack needs to tell Alia Shawkat’s Lola about a past trauma that he is facing right in this very house, despite his usually upbeat demeanor. As the movie picks up steam, DuVall has a relatively simple strategy with a strong batch of players. But though it can be funny and does feature some heartfelt moments, it is a movie of waiting on a collapse, as executed with little complications.

In a very welcome leading spot, Melanie Lynskey is both the orchestrator and goofball of the title event, her character's booze-guzzling and sporadic ditziness making for jokes that feel mean-spirited or just underwritten. In general the cast is strong, with a few unexpected touches; DuVall and Lyonne have finite chemistry, and Schwartz's dramatic moment will put a few cracks in your heart. But DuVall's script is too emotionally safe for anything her cast does to leave a mark, instead opting for a Hollywood-neatness within an indie movie's logline. For its multiple interventions, the events are relatively, bizarrely comfortable.

DuVall's eye is the strongest element on display here, from Polly Morgan's cinematography to even the house chosen as a primary location. Not for nothing, it makes textbook-worthy use of negative space—heightening the effectiveness of its intimate conversations, characters are often tucked away into the corner of the frame in fully realized visuals.

There is a lot of promise within “The Intervention,” as DuVall spikes a mix of Sundance-ready ideas with sprightly ensemble work, nonetheless with an unblinking presentation of hetero and homosexual relationships mixing socially. With a sharper script, DuVall could make a strong name for herself as a director for either the indie world or Hollywood.

Proving again that Sundance formulas do exist, “Joshy” is a bit like “The Intervention”: a group of people get together in a house for the weekend, face their demons, and are changed, somewhat. This one focuses on a bachelor party’s weekend—or what should have been one, before Josh’s (Thomas Middleditch) fianceé hung herself a year and a half ago. Josh uses this time to heal with his friends, including the meek Adam (Alex Ross Perry), the bro'd-out Eric (Nick Kroll) and maritally-restless Ari (Adam Pally). More people find their way into the weekend unpredictable activities, like Eric’s friend Greg (Brett Gelman), a girl at a bar who digs Ari (Jenny Slate’s Jodi), and more.

“Joshy” overcomes its flat premise by being one of the funniest movies from the festival, in spite of its morbid context. It succeeds by simply involving a slew of exciting, seasoned comedic performers who are just about ready to breakthrough: Slate, Kroll, Gelman, Pally, Middleditch and Aubrey Plaza and more. The biggest star of the film though is Alex Ross Perry, who has a disarming, completely dorky dryness similar to when Zach Galifianakis won everyone’s hearts with “The Hangover.”

Writer/director Jeff Baena’s script keeps the shenanigans grounded to goofy performances at most, offering a Hollywood movie’s typical appetite for humor with the restraint of a low-budget gathering. Its emotional context doesn’t work as Middleditch's title character disappears into the backdrop, but Baena's film has a comedic life of its own. "Joshy" is like a minor league version of a huge comedy, but it very often gets the same size of laughs.