One of the most anticipated guests at Ebertfest 2015 was not a filmmaker but a legendary film critic. Leonard Maltin, creator of the "Movie Guide" series, visited the festival and wrote about it at his Indiewire blog, "Movie Crazy." Entitled, "Filmgoing at its Best," Maltin provides a personal account of his experiences attending film screenings, moderating post-film Question and Answer sessions and savoring every last ounce of the cinematic euphoria offered in abundance at the Virginia Theatre.

"My wife and I attended for the first time this past weekend and had a wonderful time," writes Maltin. "We met nothing but friendly, enthusiastic people and interesting filmmakers, and got to watch movies on a giant screen at the beautifully restored Virginia Theatre." 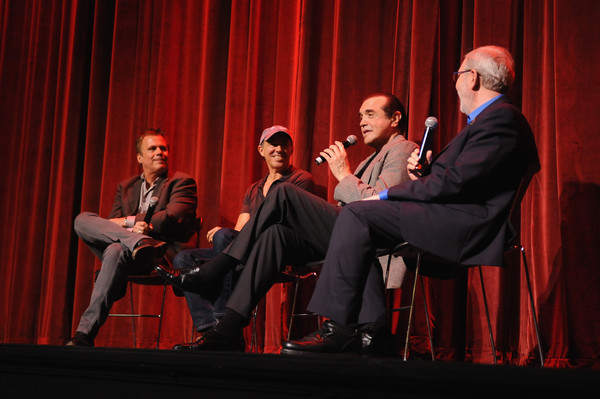 "Palminteri is a great raconteur and told colorful stories about the making of the picture, which remains close to his heart and very much a part of his life," writes Maltin. "He continues to perform the one-man show and is involved in a musical stage adaptation that is aiming for Broadway."

The Saturday night screening of Ramin Bahrani's "99 Homes" was attended by Maltin, who praised the film as "electrifying." He then joined Variety critic Scott Foundas onstage following the Sunday morning screening of Ethan Hawke's documentary, "Seymour: An Introduction," to interview its subject, Seymour Bernstein.

"Seymour Bernstein is a genuinely inspiring man, an octogenarian who possesses both wit and wisdom, guiding his piano students to a greater understanding of themselves and their music," writes Maltin. "He was joined by his friend, philosopher and spiritual scholar Andrew Harvey, for a conversation that could have gone much longer."

In closing, Maltin hails Chaz Ebert as "the glue that holds this festival together. [She] makes everyone in the audience feel connected, through her warm and sincere introductions to each event. She also presents her special guests with a Golden Thumb award, actually cast from her late husband’s famous finger by the same company that manufactures the Academy Awards. It’s just one more way of keeping Roger Ebert a living presence at this film lovers’ festival."