The title of the new documentary directed by and featuring Ethan Hawke provides a vague indication of the work’s eventual assets and liabilities. On one level, the title is straightforward: the movie does introduce viewers to Seymour Bernstein, a classical pianist in his 80s who, at the midpoint of his life, gave up public performances and became a teacher of piano instead. Then there’s the allusion to J.D. Salinger’s novella, an account of the precocious genius of the Glass family, by now something of an American literary legend. Although the evocation of Salinger and his creation evokes intriguing associations of reclusiveness and talent and all that, in the end there’s not much here to do with Salinger or his character: the title plays on a coincidence, and is in a sense a bit cute and/or pretentious (my own preferred term is “know-somethingish”).

Hawke might have more appropriately called his short feature “Seymour: An Interrogation,” because while the film lays out Bernstein’s life story and his perceptions on art, and explores his talent, Hawke makes clear from the outset that he chose Bernstein as a subject (the two met when seated next to each other at a dinner party) in order to explore questions hyphenate Hawke (the “Boyhood” and “Training Day” co-star has accrued not just several directorial credits but is a published author as well) has about his own artistic practice. “I didn’t know what was authentic,” Hawke admits of his own work in an early conversation with Bernstein. He apparently sees something very authentic in his subject.

In limning the world of classical music during the period in which Bernstein practiced, then abandoned, performance, Hawke gives viewers the picture of a very different New York City than exists today: a Manhattan, or at least a pocket of Manhattan, both aesthetically refined and at least mildly affluent. In a café, Bernstein reminisces with an adult former student who neglected his lessons to the extent that he became “incorrigible;” this well-heeled fellow is Michael Kimmelman, now an art critic for “The New York Times.”

Throughout the picture, Bernstein interacts with genteel folk who quietly deplore what they see as the American perception of art and art-making—“they want the ‘Flashdance’ fallacy,” one sighs, alluding to a talent that flies out of a bottle like a genie with no craft or labor involved. In between these exchanges, Bernstein works with young students, counting out measures, contemplating accents, working out the problem of how to get one’s pinkie to just this particular distant piano key in time to make the musical phrase coherent. Like Jody Lee Lipes’ recent documentary “Ballet 422,” Hawke’s movie patiently demonstrates that Art Needs Work. But it also needs philosophy, and Hawke, while never so louche as to just up and ask the reason Bernstein gave up the limelight to impart his wisdom to others instead, prods the ways Bernstein’s struggles to be a great performer abraded his desire to be a decent human being.

“Jackson Pollock and…Marlon Brando were all pretty notoriously horrible people," Hawke suggests to Bernstein at one point. “They were. And there are musicians who were monsters,” Bernstein responds. “Glenn Gould, for example,” Hawke offers. Bernstein takes the bait, and offers up some spicy Gould dish. For Bernstein, the tragedy of Gould’s approach is that he’s only able to hear Gould’s playing: “I don’t hear Bach,” Bernstein says. Hawke lets it lay, not pursuing the question of whether there’s any value in hearing Gould qua Gould. Also curious is, given how one of the film’s threads seems to deplore the trappings of fame and acclaim him, Bernstein’s pleasure in having apparently played a small part in gaining a knighthood for the British pianist Clifford Curzon.

I don’t think the contradictions implied here can’t be resolved or at least fruitfully explored; it’s that Hawke doesn’t seem to think so. So the movie kind of flits along—if one wanted to be cruel one would use a word like “dilettante”—pleasantly and informatively enough without ever lifting off. Until the last fifteen minutes or so, in which Bernstein, having been convinced to play a semi-private recital for Hawke’s theater company, performs and discusses Schumann’s “Fantasia.” Hawke, in a rather disarming display of cinematic virtuosity, cuts from Bernstein playing the piece, Bernstein directly addressing the camera, Bernstein directly addressing a live audience, keeping the music on a through line for the most part as Bernstein lays out its history and its significance for both himself and music itself. A prior pronouncement by mystic Andrew Harvey, “I had an experience of music creating the whole universe,” suddenly seems a little less dippy. The effect of the sequence is both pedagogically rewarding and aesthetically transportive. It lifts the movie into a higher realm. 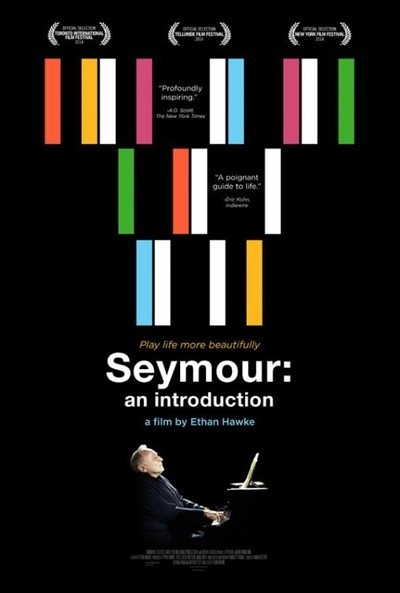