“Amongst your many possessions, you own my likeness, lo all these years so that every time I look in the mirror, I have to send you a check for a couple of bucks,” Carrie Fisher proclaimed at George Lucas during his AFI Lifetime Achievement Award ceremony in 2005. Her deadpan speech brought down the house, and later served as material for her 2008 memoir, Wishful Drinking, and her subsequent one-woman show of the same name, which I was fortunate enough to catch in Chicago. Not only is Fisher one of the funniest people in show business, she is also one of the most invigoratingly honest, with her candid accounts of overcoming the sort of obstacles that would send most Hollywood careers clear off the rails. When she reappeared as Princess Leia in last year’s “Star Wars” film (“Episode Seven—ty-two,” Fisher quipped) to boisterous applause from the audience on opening day, it was impossible not to get a little misty-eyed. Yet that turned out to be a mere primer for the rich emotional journey that is “Bright Lights,” Fisher Stevens and Alexis Bloom’s marvelous vérité documentary about Fisher and her equally indomitable mother, Debbie Reynolds, who achieved stardom around the same age her daughter did, in another landmark picture, “Singin’ in the Rain.”

Anyone who has seen Reynolds’ brilliant performance in Albert Brooks’ 1996 gem, “Mother,” knows how funny she can be as a stubborn, people-pleasing matriarch, and it turns out that her relationship with Fisher is not all that far removed from the one her character had with Brooks. The withering way Fisher regards her mother’s archaic flip phone is identical to Brooks’ expression when Reynolds offered him a moldy scoop of Sweet Tooth Ice Cream. Just as Fisher’s stage show was much more than a laugh riot, Stevens and Bloom’s film resists the standard talking head formula, opting to linger on the revealing moments between punchlines. Though retirement has never been a desire for Reynolds, whose MGM-bred work ethic is the equal of any veteran athlete, it’s clear that the inevitable ravages of mortality are starting to catch up with her. There’s real tension in the sequences where she belts out songs to adoring crowds before slowly making her way down the stairs offstage.

Some of the most achingly moving footage takes place in flashbacks, notably Fisher’s visit with her ailing father during his final days (in footage originally shot for HBO’s “Wishful Drinking” special), and a Reynolds concert from the archives where 15-year-old Fisher is invited onstage to sing “Bridge Over Troubled Water” (her splendid vocals sound an awful lot like Meryl Streep in “Postcards from the Edge”). What the film is a testament to, above all, is Fisher’s tireless devotion to her mother, as well as her bracing wit which she utilizes to describe everything from the “celebrity lap dances” of fan conventions to her struggles with manic depression (“one mood is the meal, the other is the check”). Perhaps most uproarious of all is her chat with longtime friend Griffin Dunne, who recalls how he helped Fisher lose her virginity. “My hymen was a burden,” she explains. 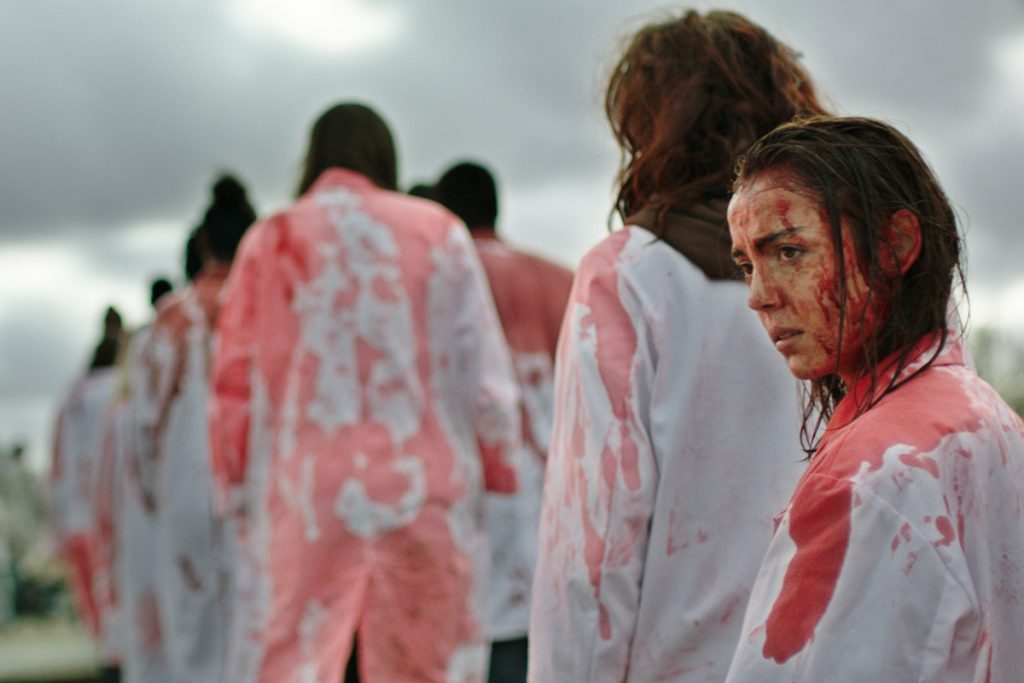 Virginity loss couldn’t be a better segue way into discussing Julia Ducournau’s galvanizing debut feature, “Raw,” a portrait of sexual awakening and self-discovery that immediately warrants comparison to Nicolas Winding Refn’s “The Neon Demon.” Both films are deeply pleasurable works of pure cinema featuring a young heroine who undergoes a transformation of sorts, while gaining a newfound awareness of her body and its—shall we say—insatiable needs. The protagonist of “Raw,” Justine (Garance Marillier), kisses her reflection in a mirror just as Elle Fanning does in “Neon Demon,” though Ducournau adds another layer of strangeness by including a song with subtitled lyrics such as “I want to bang the dead” (calling to mind Jena Malone’s experimentation with necrophilia in “Demon”). Whereas Refn intentionally slathers an artificial sheen over every frame and line of dialogue, Ducournau takes a naturalistic approach to her story that is more evocative of “Let the Right One In” in its portrayal of alienation and primal bloodlust.

Despite reports of audience members fainting during the film’s TIFF screening, “Raw” is surprisingly palatable for a film about cannibalism, and a lot of that has to do with Marillier, who delivers one of the year’s great breakout performances. She looks positively dainty in her early scenes, as she politely refuses meat on multiple occasions, much to the chagrin of her rebellious older sister, Alexia (Ella Rumpf). But after having her first taste of flesh, Justine’s chin gradually lowers as her eyes grow into Kubrickian saucers. One of Ducournau’s gifts is to make a single scene squirm-inducing on a variety of inventive levels, especially the pivotal moment when Alexia decides to give her sister a waxing, the very notion of which is unsettling in itself. Having skin get torn from your body in short, painful bursts is no one’s idea of a picnic, especially with a persistent rash and slobbery dogs to contend with. The set-up is masterful, suggesting any number of ways the scene could go quickly haywire, yet the direction Ducournau ultimately takes is not only unexpected—it is revolting, hilarious and oddly moving, just like the film itself. It is sure to please many audiences aside from the dinner-and-movie crowd…unless they are into finger food. 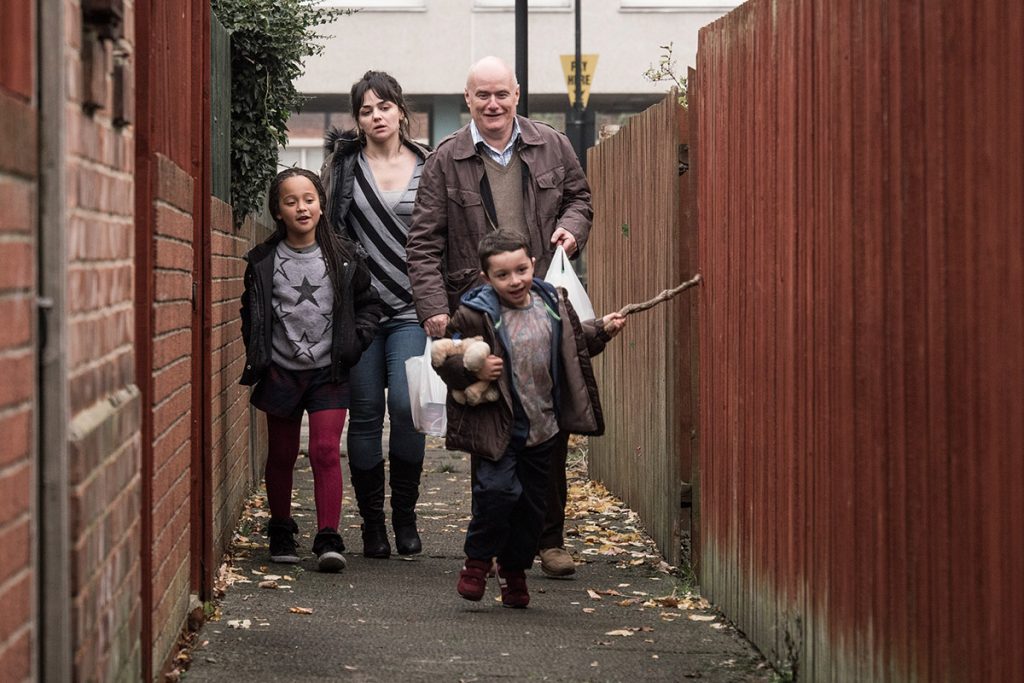 And now we have arrived at “I, Daniel Blake,” Ken Loach’s Palme d’Or-winning drama that was criticized by some viewers for not being as adventurous as Maren Ade’s “Toni Erdmann” or Paul Verhoeven’s “Elle.” While “Toni Erdmann” remains the best narrative film I have seen in 2016 thus far, “I, Daniel Blake” easily cracks my top 5. Here is a picture that is so close to my everyday reality that I ended up watching it in stunned silence. Only afterwards was I able to let the tears flow. Loach has crafted a no-holds-barred attack on the injustice of a dehumanizing welfare system designed to treat people with serious or chronic illnesses like financial burdens who must be worn down into an early grave. Daniel Blake (beautifully played by Dave Johns) is a lot like my parents: a good-hearted person who has worked his whole life, and is now threatened with being robbed of everything. While recovering from a heart attack that has rendered him unable to work, Blake finds himself lodged in a health care network that couldn’t care less about his health. He’s forced to spend days waiting for a call (one assumes for Godot), while in the meantime, listening a purgatorial loop of Vivaldi reprises after he’s repeatedly put on hold. The system has no time for people his age who are inept when it comes to modern technology—he holds a mouse up to a computer screen and writes his CV in longhand—and quickly brands Blake as a hopeless case.

This film would be intolerably bleak if its titular hero didn’t have such a wry sense of humor. Even before we see his face, his voice earns a big laugh as the opening credits unfold over a black screen. We hear Blake’s mounting exasperation as he’s required to answer a series of clueless and robotic questions, all of which fail to get at the heart of the issue—that being his heart, of course. Johns single-handedly serves as the film’s life force, though he never allows his character to devolve into a one-note saint or martyr. He’s simply a man who has had enough and is determined to preserve his self-respect. Equally Oscar-worthy is Hayley Squires as a young mother so desperate to provide for her children that she becomes prone to having her impulses drown out her good sense. She shoplifts while under the sleazy gaze of a security guard, and rips open a can of pasta to quell her agonizing pangs of hunger. Squires’ performance is shattering, but Loach doesn’t just hold her up as an object of pity. We can sense the embarrassment she feels in her predicament, and the tender bond she and her kids forge with Blake is so well-realized that it left me feeling a little more hope in the human race. Whether or not “I, Daniel Blake” is the film of the year is a worthy topic for debate, yet there’s no question Loach’s latest masterwork is the film of my year.