Three films about twists of fate that come about when we let new people into our lives, from three very different corners of the world, premiered at the Chicago International Film Festival this year. These films couldn’t be more different in tone, style or purpose, but it’s an event like CIFF that brings them together for viewers. There are elements of all three that work, but also frustrations in their execution, even in the piece by an undeniably masterful filmmaker, working ambitiously this time but not confidently. We’ll get there. Let’s start with the best of the three, one of those pleasant, I have to say it, surprises that one finds at a fest like CIFF.

Dutch filmmaker Mike van Diem’s “Character” won the Oscar for Best Foreign Language Film almost twenty years ago, but the filmmaker has been relatively under the radar since. He brings his first feature-length film since to this year’s CIFF, the clever and fun “The Surprise,” a truly black comedy driven by a pair of strong performances and a witty, Coen-esque style.

The mega-wealthy Jacob van Zuylen de With (Jeroen van Koningsbrugge) has long felt like he saw life through a pane of glass. As he describes it, he can see the world going by him, but he isn’t affected by it. And when his mother dies, he sees no reason to keep going. After a chance encounter, he stumbles upon a covert company called “Elysium,” which promises to take customers on one final journey. It’s a one-way trip. The buyer can choose the way he goes—and a video presentation of personalized “solutions” including a carnival ride accident is pretty hilarious—but Jacob chooses one of the most popular options—“The Surprise.” He’ll never know how or when it’s coming.

Everything changes for Jacob before he even gets out of the Elysium offices. While picking a coffin for his final resting place, he runs into a beautiful young woman named Anne de Koning (Georgina Verbaan), also signing up for “The Surprise.” Anne and Jacob can wait for their final destinations together. And, well, of course, you know how things go from there. As Jacob says, he starts to “feel confused” when he’s around Anne, wondering if he’s made the right decision about shuffling off this mortal coil. But is it too late to cancel the deal?

It takes some time to start working, but once van Koningsbrugge and Verbaan connect, “The Surprise” clicks into place. As they wander through life, wondering if every encounter could be their last—especially a hilarious bit about a runaway truck that nearly hits them—they find something to love for. There’s a bit of “A Long Way Down” in “The Surprise,” but this film is smarter and more self-aware, especially after a final act twist gives it new life. It’s an imperfect comedy tonally but it’s fun and witty more often than it’s not. An American remake feels inevitable. See this one first if you can. 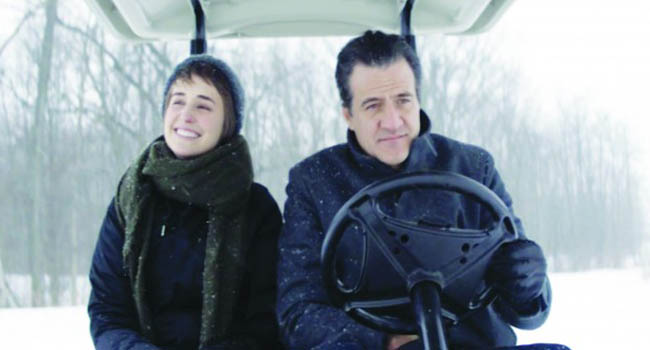 I can’t say the same about Patrick Underwood’s clichéd “The Middle Distance,” premiering in the New Directors Competition late last week. I understand that young directors often turn to the familiar when crafting their first works—either personal stories or film archetypes that aren’t too demanding—but to say you’ve seen “The Middle Distance” at every film festival before would be an understatement. It does nothing to distinguish itself from all the other stories of emotionally sheltered white men who learn a thing or two about life, usually in the Midwest.

The troubled soul of “The Middle Distance” is Neil (Ross Partridge), a jerk of a man who drinks, sleeps around, and works himself into emotional numbness. As is often the case with pieces like this, Underwood and Partridge never give us a reason to care about Neil. So when he’s harassing bartenders or acting like an asshole to the people in his life, we just want to see him get punched in the face. Partridge does his best to make Neil interesting, but he feels like the cliché of the LA workaholic, ignoring his personal demons and any support structure in his life to chase the dollar. We’ve seen this character quite literally a thousand times before.

Neil has to return to New Buffalo, MI when his father passes away to help his brother James (Kentucker Audley) take care of his estate. In a bit of too-convenient plotting, James has to hit the road for a gig, leaving the highly incapable Neil to handle things with James’ fiancé Rebecca (Joslyn Jensen). Neil drinks too much, crashes his car, treats people like shit, and then changes his ways, of course. But Underwood can’t settle on a tone. There are times when he really captures the snowy New Buffalo landscape, allowing “The Middle Distance” to breathe and feel lived-in, but then he punctures that realism with a line that sounds so overly scripted it could come from a screenwriting program. “Life happens, man. Gotta get with the program.” Yes, it does, but “The Middle Distance” isn’t life. 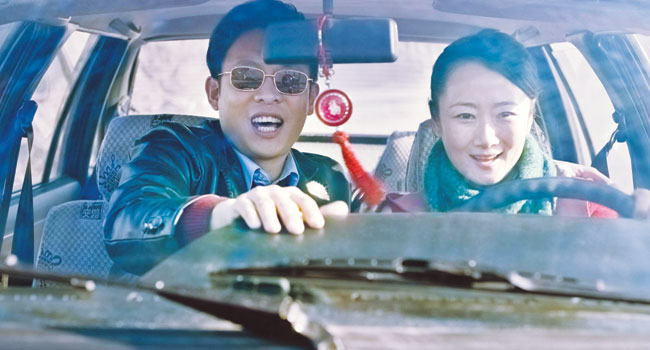 Chinese filmmaker Jia Zhangke has captured life in masterful films like “The World” and “A Touch of Sin,” often tinged with a commentary on his changing country. His latest, “Mountains May Depart,” which premiered at Cannes to divisive reviews, is a complex, ambitious piece, using different aspect ratios, languages, and time periods to tell a story of lost happiness on a shifting landscape. On paper, it’s a film I really admire. We need more of our great filmmakers to take risks like Jia takes here. The execution is another matter. The final act of “Mountains May Depart” is an unqualified disaster. In fact, each act gets less interesting, as we watch the piece sink into ideas that weren’t fully considered. It’s almost like watching a workprint at times; seeing a filmmaker working through ideas that he hasn’t refined.

“Mountains May Depart” opens in 1999 China, starting with a great dance number to the Pet Shop Boys’ “Go West,” not just a catchy tune but a title indicative of a film about changing times and the influx of Western culture. We meet a love triangle with Tao (the great Zhao Tao) at its apex. She is the object of affection of a coal miner named Liangzi (Liang Jing Dong) and Zhang Jinsheng (Zhang Yi), childhood friends whose lives have gone in a very different direction. Zhang is embracing the benefits of wealth, showing off his new car in an effort to woo Tao. When she seems overly comfortable with Liang (the two even share a food bowl, much to Zhang’s dismay), he buys the entire coal mine. Tao will be his, and she eventually succumbs, giving birth at the end of this first act, shot almost in full frame, giving the piece an old-fashioned tight focus. The two name their son Dollar, realizing how ridiculous that is in-story, as Jia almost winks at the viewer at the same time.

In the next act, Jia expands his vision to widescreen and we jump forward to a much-sadder China. Dollar is a young boy, caught between his divorcing parents, as a mother realizes she doesn’t really know him anymore. In the truly bizarre final act, Jia jumps forward to 2025, tells his story almost entirely in English, and takes the film in another direction altogether as a 25-year-old Dollar starts an unusual relationship with a teacher. The young man who plays Dollar in the final act is stilted and awkward, likely because of the choice to act in a second language, but also because the film is merely unhinged at this point, unfocused and unclear on its directorial objectives.

Of course, the very different styles in each section reflect not only a changing country but also a filmmaker interested in formal experimentation. Like a lot of experiments, the impact can be more intellectual than visceral. I admired a lot of what Jia was trying to do with “Mountains May Depart,” but it just doesn’t come together like his best work.