A Long Way Down

There are moments of tenderness and honest human emotion buried in the frustrating “A Long Way Down” but one has to work far too hard and give far too much credit to the over-qualified cast to grab at them. Based on a hit book by Nick Hornby (“High Fidelity,” “About a Boy”) that contained an emotional minefield maudlin enough that the film took nearly a decade to come into existence even though the Hornby bandwagon was full in the ‘00s, “A Long Way Down” is a textbook case of over-direction. Characters laugh too hard; the score by Dario Marianelli alternates between wispy guitar strumming and heartstring-pulling piano tinkling; the suicidal characters literally dance to “I Will Survive” at one point. You get the idea. Honest emotion falls victim to poor filmmaking again.

Martin Sharp (Pierce Brosnan) wants to kill himself on New Year’s Eve. He has tumbled from the height of popularity after a sex scandal with an underage girl destroyed his family and sees no reason to go on if he’s not famous. He climbs to the roof of the Toppers Building, a notorious suicide spot; so notorious that he runs into three other people on this frosty, fateful evening. Maureen (Toni Collette) has a severely disabled son and can’t go on. Jess (Imogen Poots) is heartbroken and J.J. (Aaron Paul) tells his new mates that he has brain cancer. The four agree to delay their life-ending until Valentine’s Day, keeping tabs on each other over the next month-and-a-half and, of course, forming a unique bond.

When the “Topper House Four” is outed in the press (it turns out that Jess’ dad is a famous politician, making her bait for tabloid headlines), they become semi-celebrities. To escape the attention, they jet off to a resort, frolic in the surf, grow closer, learn the importance of life, get a tan, etc.

“A Long Way Down” is a film that’s afraid of its subject matter: suicidal depression. One never senses any actual danger or urgency in the plight of these characters to battle their demons before they kill them, and the lack of any sense that these people might actually end their lives drains the piece of drama. Their depression is merely a plot device. J.J. was once the frontman for a band called Gepetto and he laughs about one of the hackneyed lines that he wrote: “I don’t mind the pain, it’s the hope that kills me.” Writer Jack Thorne and director Pascal Chaumeil present the line as a bit of humor about a wannabe grunge band that never was but it’s indicative of the problem with the film. The movie never minds the pain. It doesn’t pay attention to it. We don’t feel it. Well, most of the time. The always-great Collette somehow finds a way to make the most maudlin and manipulative character arc of the quartet hit most of the right beats. The film's greatest value is further proof that Collette makes everything she's in better.

To be fair, Poots is quite good here as well, but both actresses are weighed down by a director who didn’t trust them. Jess lying on her bed singing the BeeGees classic “Tragedy” should be done with a wink, not with a treacly score underneath. When the foursome realizes they’ve written their non-suicide pact on the back of Maureen’s suicide note, the actors have been directed to laugh in response in an exaggerated, overblown way. It sounds picky, I know, but “A Long Way Down” never registers emotionally because it is constantly reminding you it’s a movie. And it’s not a very good one. 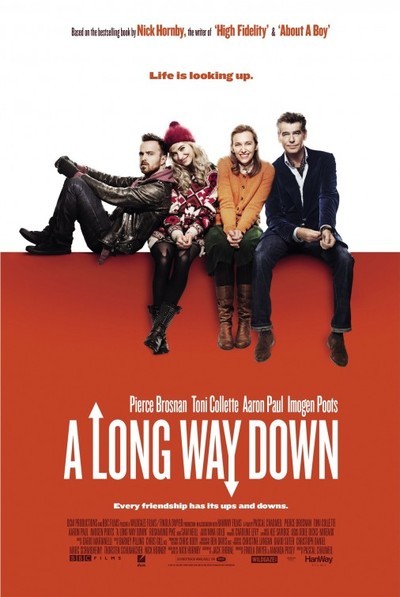