Founded in 1993 by a Columbia College film student, the Chicago Underground Film Festival (CUFF) is the longest-running fest of its kind, maintaining its non-commercialized spirit through the art house domination of Hollywood-ized independent films. The key term here is “underground,”which is indeed different than “independent.”Let Roger explain, from his words about the festival back in 1996: “[The films at CUFF] are not to be confused with ‘independent films,’which are discovered at Sundance by Hollywood agents and lead to fame and fortune for their lucky directors. They exist on another plane--grottier, more anarchic, less eager to please, more willing to outrage. Underground films are to independent films as garage bands are to warm-up acts.”

With regards to this year’s line-up, these acts remain as curious and truly independent as ever. CUFF takes no allegiance to strict experimental, narrative, documentary, or animation forms, but is a haven for finding the projects that bridge the categories in unique ways. Featuring a dozen feature films (over 60 minutes each) and also a dozen shorts programs, CUFF takes place May 13-17 at the city’s wonderful Logan Theatre, located in the Logan Square neighborhood.

Jury members for the festival include Chicago filmmakers Michael W. Phillips Jr. and Ines Sommer, and also our own Far Flunger, Kevin B. Lee. 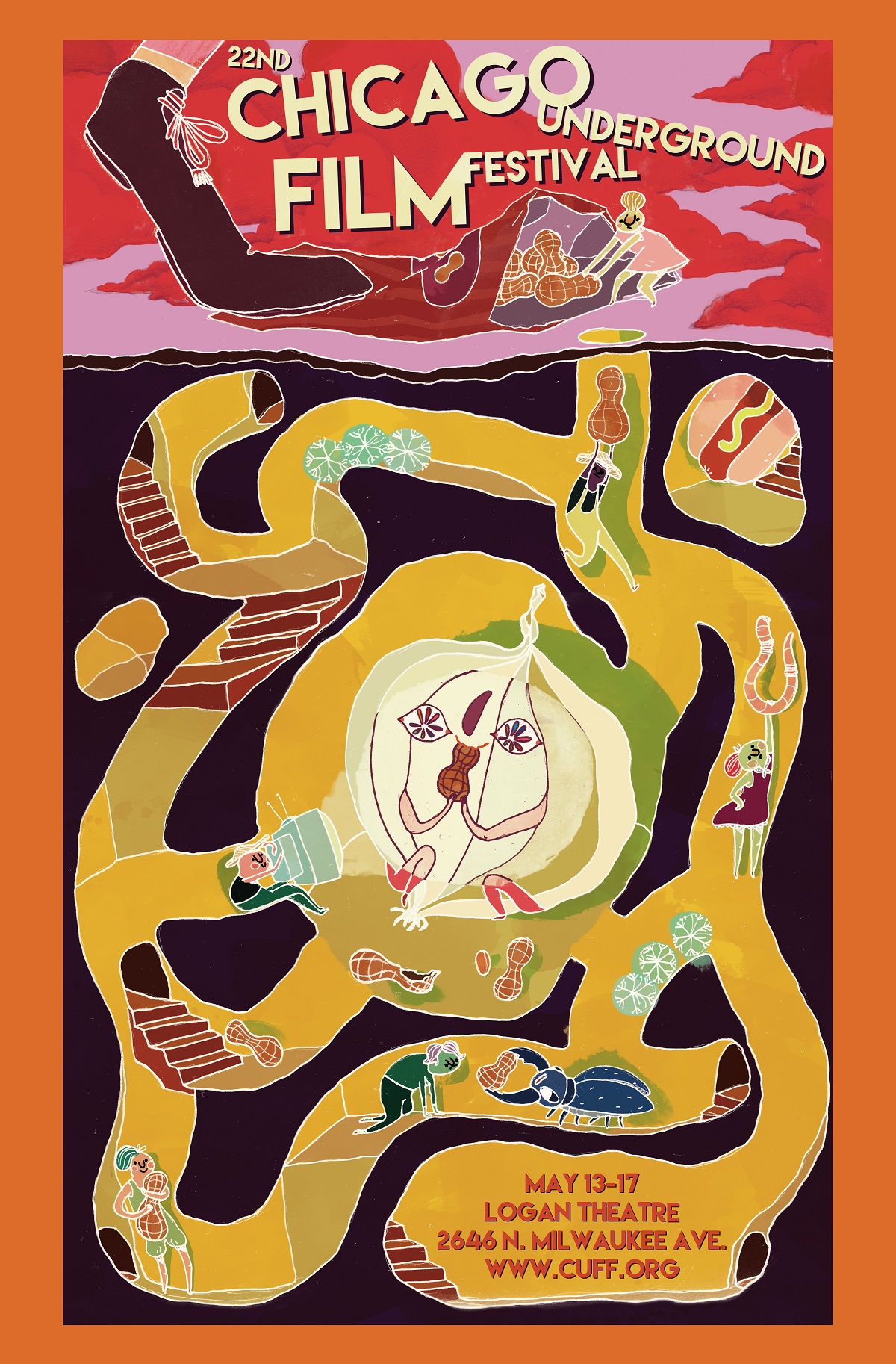 The fest’s opening night feature is the North American premiere of “Ruined Heart,” as directed by prolific filmmaker/poet Khavn de La Cruz (credited in this film as Khavn). Starring the city of Manila and Tadanobu Asano (“Ichi the Killer,” “Thor,” Martin Scorsese’s upcoming “Silence”), this gangster odyssey of color and grit is a self-proclaimed “punk noir opera,” one that boasts a killer wall-to-wall soundtrack that constantly shifts the shape of the story, while playing upon the age-old narrative expressed in its subtitle: “Another Lovestory Between a Criminal and a Whore.” Wong Kar Wai’s go-to cinematographer Christopher Doyle shot the film as well. Khavn will be in attendance for the 8pm screening on May 13, and will perform at the following opening night party, which will be held at the Elastic Arts Foundation (3429 W Diversey Ave), for just five dollars.

Among other features at CUFF, two particularly stood out to me when previewing as much as I could from the entire batch. One of them was “L for Leisure,” an indeed laid-back collection of international vacation tales set in the early '90s. If you’re able to look past its American Apparel production design and sometimes glib nostalgia, the atmospheric comedy is a light-hearted meditation on experiences of youth, its past setting allotting presentations outside of whippersnappers conversing through technology. This film from directors Lev Kalman and Whitney Horn will screen on May 14 at 6:30pm.

The film that caught my eye most, and held my attention for a full 70 minutes, involved nothing more than people dancing. “Living Stars,” directed by Gastón Duprat and Mariano Cohn, is a bit of a miracle movie. It’s extremely light but not weightless at the same time, offering keen sociological narratives to strangers’lives, as expressed through the freeness of their dance moves, their choice of songs, the environment in which they dance, and the people watching them. The film is as entrancing as you let it be, and an experience to share with an audience. “Living Stars” will show on Sunday, May 17 at 6:00pm.

CUFF ends on Sunday, May 17 with a presentation of a “Burnt in Memory, My Lover Has Steel Legs and Street Lights for Eyes” from local filmmaker Robert Stockwell. Aiming to create the “Koyaanisqatsi” of the Windy City without Philip Glass ominousness, Stockwell’s pulsing ode documents Chicago’s many corners and residents, while allowing their images to speak for themselves without narrative. During this screening, the musicians who provided Stockwell’s improvised score for the recorded version will accompany the film with another round of improvised music.

Below are just a few highlights from the fest’s various short categories, listed along with their director and respective program.

“En Plein Air” (Jerzy Ross) - There's something curiously off about this short that's nonetheless created from a confident vision, especially as it toys with how romantic relationships can be influenced by those outside of them. (Playing before “L for Leisure”)

“Discussion Questions, presented by Martin Thebes” (Jonn Herschend) - The most toe-tapping Powerpoint project you may ever see. (Shorts 1)

“I’m in Pittsburgh and It’s Raining” (Jesse McLean) A stand-in/body double shares her experience of playing Anne Hathaway in this experimental doc. (Shorts 1)

“Hacked Circuit” (Deborah Stratman) - Foley artistry gets the single-take “Birdman”treatment, expressing the craft within a new subtext of a post-Snowden era as sounds for Francis Ford Coppola’s “The Conversation”are recorded. (Shorts 1)

“Resting Place” (Kristian Knigge) - A caretaker pushes a wheelchair-bound former Olympian through the woods. Shot in a breathless one take that will leave the audience gasping. (Shorts 2)

“High and Dry” (T.J. Misny) A NY photographer struggles to cry the genuine tears, at the behest of her co-workers and possibly-depressed boyfriend. (Shorts 3)

“Her Silent Seaming” (Nazli Dinçel) - An alarming recollection of graphic sexual experiences, told through select text accompanied by a haunting rhythm and a raging score. (Shorts 8)

“Hard-Core Home Movies” (Greta Snider) This short from 1989 asks for a definition of what’s considered hard-core in the punk scene. Talking to people who enter the pit for contrasting reasons, the director gets a wide variety of answers. (As part of “Dirty Looks presents ‘Hardcore Home Movies”)

“Bad at Dancing” (Joanna Arnow) - Writer/director Joanna Arnow (“i hate myself :)") awkwardly interjects into her friend’s love life, trying to find a place in their sexual exploits in this dark comedy. This short is solidification of a rising talent, especially for those who can connect to storytellers way past the point of having a personal filter. (Shorts 11)

Along with watching the films and its various nightly after parties, attendees are encouraged to engage with festival filmmakers like Khavn, Deborah Stratman, and others during the four 90-minute Bar Talks occurring at the theater’s new lounge throughout the festival, each moderated by Newcity film critic Ray Pride. Topics involved are “Cinema Delirium: The Making of ‘Ruined Heart’” (May 14, 5:00pm), “True Fiction: Narrative Filmmaking,” (May 15, 5:00pm), “The Naked Truth: Documentary Filmmaking” (May 16, 12:00pm) and “Local Option: Making Films in Chicago” (May 17, 12:00pm).