The legendary cinematographer Vilmos Zsigmond, whose passing on January 1 at the age of 85 was announced today, received a number of accolades for his groundbreaking work behind the camera, including four Oscar nominations (and one win); three nominations (and one win) and a Lifetime Achievement award from the American Society of Cinematographers; and the proverbial many, many more. And yet, considering the impact that his work would prove to have on both the films that he worked on and the people who saw them, such acclaim almost seems kind of puny in comparison. Simply put, the man was a genius who could seemingly adapt his considerable skill set to virtually any genre that came his way and whose work has seared itself into the minds of anyone who witnessed it, even if they didn’t know (or couldn’t pronounce the name of) the man responsible for such memorable imagery.

Born in Hungary on June 16, 1930, Zsigmond’s first notable work behind the camera came in 1956 when he and friend László Kovács shot footage of the Russian invasion of his native country and then fled to America, where they were able to sell their striking footage to CBS. The two eventually made their way to Hollywood with the dream of working in motion pictures and over the next decade or so, the two began working in the exploitation film industry. (The 2008 documentary “No Subtitles Necessary: Laszlo & Vilmos” offers up an interesting look at their friendship and their ultimate impact on the film world.) During this time, Zsigmond, sometimes changing his first name to William, worked on such projects as “The Incredibly Strange Creatures Who Stopped Living and Became Mixed-Up Zombies” (1964), “The Nasty Rabbit” (1964), “Psycho a Go-Go” (1967), “Satan’s Sadists” (1969) and “Horror of the Blood Monsters” (1970). If one were to compile a Zsigmond highlight reel, precious little of it would be dedicated to this part of his career, but in an area of filmmaking where one was lucky if the footage was simply in focus, his efforts did look a little better than their grindhouse competition.

Zsigmond made his first real step up in the industry with the drama “The Picasso Summer” in 1969 and had his big breakthrough two years later when Kovács, who had already made the leap with his work on such highly regarded films as “Targets” (1968), “Easy Rider” (1969) and “Five Easy Pieces” (1970), recommended him to Robert Altman as the ideal candidate for the maverick director’s next project, an off-beat Western by the name of “McCabe and Mrs. Miller.” That film has now gone on to be regarded as one of Altman’s masterpieces, along with one of the great films of its era and one of the reasons for this was due to the striking imagery that Zsigmond captured. Instead of the grand vistas that one might expect from that particular genre, Zsigmond decided to accentuate the hazy and diffuse nature of the story that Altman was telling by electing to flash the negative before exposing it, an enormously risky experiment (if it failed, the negative being flashed would have been ruined) that, combined with Zsigmond’s skills with working with natural light that were cultivated from his years in the low-budget world, paid off beautifully with an opium dream-like atmosphere that lent a quietly hallucinatory feel to the material. His work on this movie has now gone into legend as one of the greatest feats of cinematography in the history of film but as astonishing as it may sound, it didn’t even rate an Oscar nomination back in the day.

While the industry as a whole may have chosen not to notice his efforts, the up-and-comers who were on the cusp of revolutionizing the industry certainly did, and Zsigmond began working on what would prove to be some of the most interesting films of the era. Over the next couple of years, he would reunite with Altman on “Images” (1972) and the great “The Long Goodbye” (1973), work with Peter Fonda on his follow-up to “Easy Rider,” the low-key revisionist Western “The Hired Hand” (1971) and shoot “Deliverance,” where the combination of filming in natural locations and his use of vivid colors in his visual palette would be deployed to marvelous effect. After shooting “Cinderella Liberty” (1973), “Scarecrow” (1973) and “The Girl from Petrovka” (1974), Zsigmond began two professional collaborations that would prove to have great impact on his career. The first came in 1974 when he was hired to shoot “The Sugarland Express,” the debut feature from a promising new director named Steven Spielberg. The second came two years later when another young maverick, Brian De Palma, hired him to shoot his latest work, the “Vertigo” riff “Obsession.” Neither film was a huge hit by any means, but both filmmakers were clearly on the rise and would remember to bring Zsigmond along for the ride.

He would reunite with Spielberg first in 1977 on “Close Encounters of the Third Kind,” arguably the most challenging work of Zsigmond’s entire career. Zsigmond had to figure out a way of integrating the normalcy of ordinary life with the strangeness of the UFOs without making either one silly or hokey, while still juggling a number of different storylines necessitating their own unique visual grammar. Despite the vast number of special effects that were deployed in the film, one of the things that is most striking about it is how natural it all looks, due entirely to Zsigmond’s skills. Even in a year when “Star Wars” had already knocked moviegoers for a loop, the images in “Close Encounters” seared themselves into the minds of everyone who saw it and it came as little surprise that Zsigmond would win his sole Oscar for his efforts. What was a surprise is that it would prove to be he last collaboration with Spielberg—it was apparently a rough shoot and perhaps there was some resentment over the other top-notch cameramen who were brought in (including John Alonzo, William Fraker, Douglas Slocombe and Kovács) but considering the heights they reached here, it is too bad that they never found another project to work on together.

The next couple of years would highlight another one of Zsigmond’s key attributes—his ability to move from genre to genre while always managing to come up with strikingly unusual compositions along the way. “The Deer Hunter” (1978), for example, may not be my favorite movie for any number of reasons but his cinematography is not one of them—with his visual depictions of the blasted-out Pennsylvania steel town to the lush beauty of the mountains to the hell of Vietnam, he conveyed the story in a concise and powerful manner that was far more effective in many ways than the efforts of director Michael Cimino. (The film would earn him his second Oscar nomination.) He also served as one of several top cameramen utilized by Martin Scorsese on the landmark concert documentary “The Last Waltz,” and then used that experience to help capture the feel of the rock world in “The Rose” (1979), especially during the electrifying concert scenes. There was also a return to his low-budget roots with the wild dark comedy “Winter Kills” (1979), where the trippy style he employed meshed perfectly with the crackpot meditation on the Kennedy assassination.

With his next two films, he would hit what I consider to be the apex of his career—arguably the two best films he was ever associated with and two of his finest jobs as cinematographer. On “Heaven’s Gate,” he reunited with Cimino for the infamous, expensive and calamitously received revisionist Western about an idealistic sheriff trying to protect the local immigrant population from cattle interests intent on killing them and stealing their land. Whatever one may think of the film as a whole (and I personally believe it to be a masterpiece that looks better and better with each passing year), one aspect that even the most determined naysayers would have trouble finding fault with is the cinematography. Shooting many of the scenes at the so-called “Magic Hour"—the brief period between sunset and nightfall that allows for extraordinary camera images in the right hands—he gave us one of the most visually stunning films of all time, the kind where one could freeze-frame any random image and study it in the way that one would with the works of a great master. 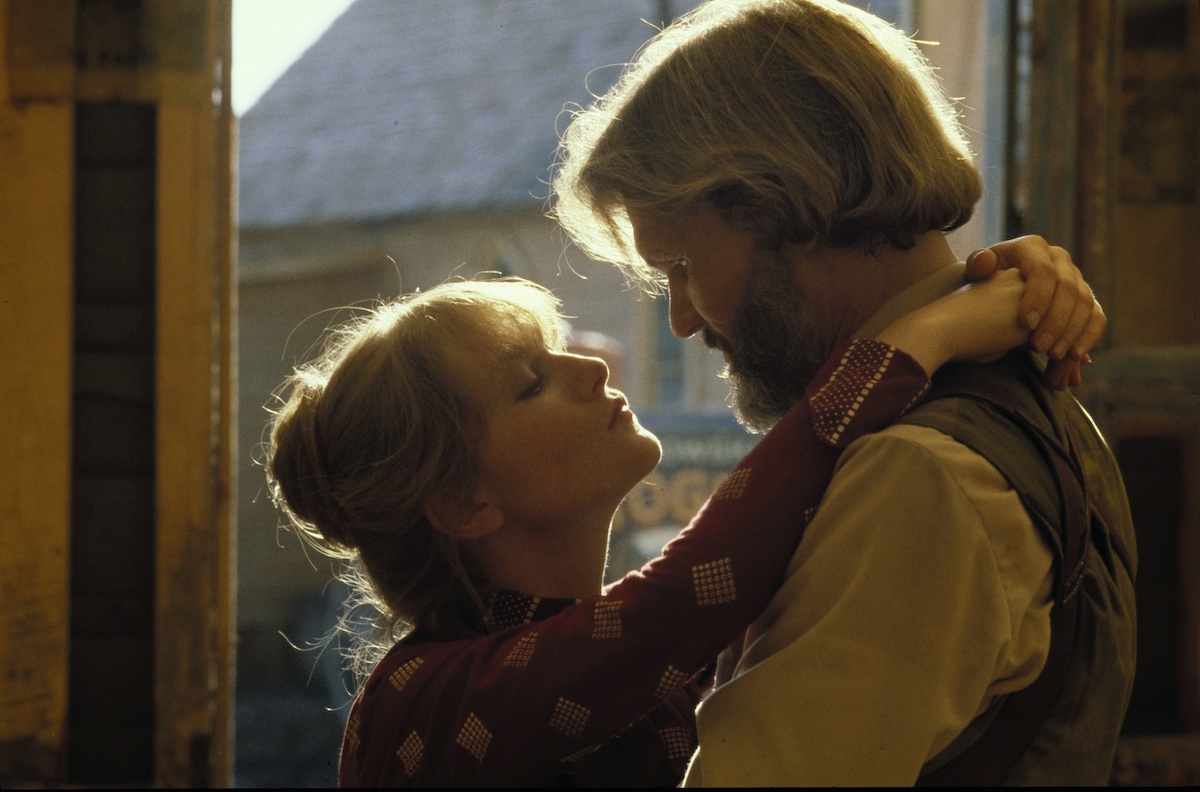 In 1981, Zsigmond reunited with De Palma on what would prove to be his greatest film to date, the political suspense thriller “Blow Out.” With its story of a sound man for a low-rent movie studio who discovers that the accidental death of a key political figure was not an accident at all, the film both gave him a chance to pay affectionate homage to his own exploitation roots, and to work with a filmmaker who himself was fascinated with telling his stories through predominantly visual means. The result is a gorgeous bit of cinematic craft, never more so than during its stunning climax in which the lurid colors of a Liberty Day fireworks display combine with the dark of night and the indifferent crowd that anti-hero John Travolta must plunge through in order to rescue Nancy Allen from her potential killer in a sequence that is both breathlessly exciting, ultimately heartbreaking and absolutely unforgettable.

For the remainder of his career, Zsigmond continued to work steadily, often in films where his contributions were the most interesting thing and always mixing up genres and trying new things. These included the aptly-titled Bette Midler misfire “Jinxed” (1982), the Jon Voight family drama “Table for Five” (1983), the odd teen comedy “No Small Affair” (1984) and the farm drama “The River” (1984), for which he received his third Oscar nomination. There was also the cult favorite “Real Genius” (1985), the odd comedy-fantasy “The Witches of Eastwick” (1987) and the earnest drama “Fat Man and Little Boy” (1989). There was a third collaboration with De Palma on the disastrous “The Bonfire of the Vanities” (1990), though the extended opening tracking shot was certainly one for the books, and he stepped into the considerable shoes of John Alonso by shooting the “Chinatown” sequel “The Two Jakes” (1990). He lent a slick and professional sheen to such gumdrops as “Sliver” (1993), “Maverick” (1994), “Intersection” (1994), “Assassins” (1995), “The Ghost in the Darkness” (1996) and “Playing By Heart” and did exceptional work on the TV film “Stalin” (1992) and the Sean Penn drama “The Crossing Guard” (1995). In the 2000’s, he would embark on his last great collaboration by shooting three films with Woody Allen, “Melinda and Melinda” (2004), “Cassandra’s Dream” (2007) and “You Will Meet a Tall Dark Stranger” (2010), shoot what would prove to be the first visually interesting Kevin Smith film in “Jersey Girl” and reunite one last time with De Palma on the underrated “The Black Dahlia” (2006), for which he would nab his fourth and final Oscar nomination. He continued to work on smaller films and in television and just a couple of years ago, he filmed a number of episodes of “The Mindy Project.”

And now he is gone, a loss made all the more painful for coming so quickly on the heels of fellow cinematography legend Haskell Wexler and at a time where the very art that he labored on for so long and with such powerful results has almost entirely been eliminated in order to make way for digital photography, in which virtually any sight one can think of can be achieved with the aid of CGI. However, without any of the new technologies at his disposal, he managed to created some of the most indelible images to ever hit a movie screen—the kind of images that inspire people to fall in love with the possibilities of the cinema and make them hungry for more. Alas, there will be no more from Vilmos Zsigmond but what he has left behind is certainly a feast for the eyes.