“In a culture of fast-paced digital newsrooms where traffic is king, ‘social’ can make or break a story. For sites relying on advertising as their bread and butter, social media editors help to save the newsroom from inevitable slumps in traffic. (For context, BuzzFeed, whose numbers are the envy of the online news industry, gets 75 percent of its traffic from social media). My work was critical to the success of my colleagues, reporters and editors with high page view goals— a reality that was both empowering and stressful. I thought it might help to reach out to other social media editors to see how they were handling the pressure. I noticed a pattern: a shocking number of them were also women. I already knew that, statistically, women use social networks more than men. But additional research revealed that social media is one of the few areas of the news industry where women outnumber men in leadership positions. A study by the Colorado Women’s College at the University of Denver found that women are only 23.3 percent of leaders in media at large, but in social media that number is 55 percent. The role of social media editor stands in opposition to that of writer or editor, which is still predominantly male. The Women’s Media Center annual report found that only 37.2 percent of newsroom staffs were made up of women, a figure that has gone nearly unchanged since 1999.” 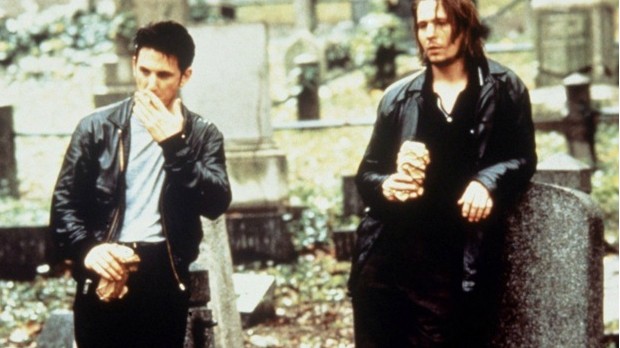 "'We Lost U2. What About Ennio Morricone?': Phil Joanou on 'State of Grace,' Making 'Heaven's Prisoners' and Working for Blumhouse": Another great interview conducted by Jim Hemphill at Filmmaker Magazine.

“‘We arrive at Ennio’s screening room in Rome, and Ennio is waiting for us in the lobby. He always talks through an interpreter, so we carry the film cans in and the interpreter says, ‘Mr. Morricone says you two may take the film upstairs to the projection room while he waits for the director.’ I said, ‘I am the director, and this is the editor,’ and I could just see the guy roll his eyes like, ‘What have I gotten myself into? Nobody told me it was this punk kid.’ He hated the temp music, which was chosen when I thought U2 was doing the score, but eventually he came around and we had a great working relationship. It was really fun. He’d sit at his piano and we’d run through themes. It was really exciting for me, because this is the guy who did ‘The Good, the Bad, and the Ugly,’ you know? There were a lot of crazy things on that movie. Robin and Sean falling for each other, fighting like cats and dogs, falling for each other, fighting like cats and dogs, falling for each other … and Gary Oldman was dating Uma Thurman, so she would come around. They got married right after the movie. I remember Ed Harris scaring John C. Reilly when he rehearsed the scene where he slits John’s throat. Ed kept pulling out real knives on the other side of the camera and lunging toward John and John was like ‘He’s got a real knife! He’s got a real knife!’ I said, ‘Ed, use the rubber knife. What are you doing?’ Then he had a meat cleaver. I don’t know where he got it. He had a big meat cleaver and lunged at John C. Reilly with it. When it came time to really attack him with the rubber knife, let’s just say John was unnerved by what was coming at him. I was too.’” 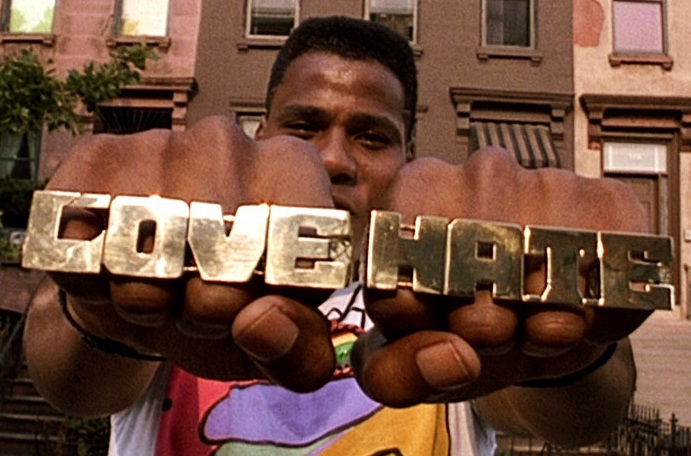 "'Driving Miss Daisy,' 'Do the Right Thing' and Juxtapositions of Race, Identity and Agency": At his blog, Tyler Durgan pens a superb examination of the two acclaimed, controversial films.

“Frequently, Lee guides the audience into point-of-view shots by panning the camera past moving characters and cutting them out of the frame. One notable use of this technique occurs in the street interaction between Mookie and the boombox-carrying, Bed-Stuy-representing Radio Raheem. As they shake hands, Mookie notices Radio Raheem’s new brass knuckles. Mookie quickly moves backwards, giving the camera room to pan in front of Radio Raheem and into a low-angle shot that enables the already large youth to become a looming display of physical presence. From here, Radio Raheem delivers an updated version of Rev. Harry Powell’s love-hate monologue from Night of the Hunter (Laughton, 1955) directly to the camera. Powell’s version has maybe the highest menace-per-frame rating of anything in cinema. Even though Lee has Radio Raheem deliver the monologue straight to the audience, even though he delivers shadow punches right at the viewer, even though he changes Powell’s tattoos into brass knuckles, Radio Raheem’s version is the opposite of menacing: it convinces you he’s basically harmless. This is an important point, considering the hostility with which typical white audiences perceive black men as muscular and uncompromising as Radio Raheem. The smile on his face as he speaks and the jovial farewell he exchanges with Mookie establish the sentimental bond between the two young men: by extension of Lee’s point-of-view shot, the audience is endowed with an appreciation and even a fondness for Radio Raheem. His death later bears this responsibility grimly, but the distinction from Driving Miss Daisy is obvious: these characters, regardless of race, occupation, or class, are individually characterized and their depiction reflects this fact.” 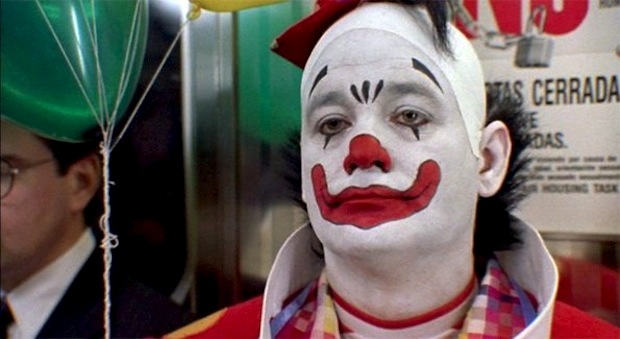 "Summer of '90: 'Quick Change': Kennedy Airport Is the Promised Land": Our own Odie Henderson reflects on the Bill Murray comedy at Slant Magazine.

“It would seem that the New Yorkers presented in ‘Quick Change’ are all somehow distracted by the single-minded pursuits that fill their heads. But the film offers a credible reason why people are so zoned out: The city has driven them crazy with the demands it puts on the business and the pleasures of daily life. The police chief is so pressured to relive his former glory after his most recent failures that he questions his (usually correct) instincts at every turn. The normally sharp Grimm gets suckered by a fake good Samaritan (Jamey Sheridan) who robs him, and though the taped bank money is clearly visible on Grimm's person, the robber misses it completely and settles for four dollars. The bank patrons are so in their own worlds that they ignore the clown with the gun in their midst. And in the film's most amusing example of people with blinders on, a bus driver hilariously played by Philip Bosco takes his adherence to the rules to almost psychotic extremes. ‘Quick Change’ requires a leap of faith from the audience. It asks us to immediately bond with and root for these criminals as the good guys despite knowing almost nothing about their motivations. They just want to leave a city that, in its numerous cinematic incarnations, has given plenty of reasons for escaping it. The film is helped by Murray, who co-directed with screenwriter Howard Franklin. Murray's deadpan and sense of smarts are very well-used here. Davis is a fine emotional anchor as the love interest with the big, easily predictable secret. Quaid's over-the-top rube act wears thin, but is not without its moments.”

"The Judy Greer Effect: Why a ridiculously talented actress gets stuck with so many thankless roles": An essential essay from Scott Meslow of The Week.

“Hollywood has a weird, self-perpetuating dead zone for actresses like Greer. It's a strange combination of factors: typecasting, sexism, and an industry that disproportionately produces movies full of great roles for actors and anemic stereotypes for actresses. ‘I’ve watched as men I started out with — guys who worked with the same directors and on the same types of shows as I did — climbed the ladder and landed larger roles with even larger paychecks,’ wrote Greer. ‘I’d always hoped that my career and salary would follow theirs. But instead the pay gap kept growing.’There's another reason Greer has spent 2015 playing ex-wives and mothers. A 2014 study from SDSU's Center for the Study of Women in Television and Film shows that a full 58 percent of the limited roles that do exist for women in Hollywood are ‘personal roles’ like wife or mother. If current trends hold, things are going to get even worse for Greer and the many talented actresses like her. In just a few weeks, she'll turn 40. The same study reveals that just 17 percent of female film characters are in their 40s — a steep decline from the 30 percent of female film characters in their 30s. For a working actress in that range, any role will be hard-fought — to say nothing of a role that actually draws upon her full range of abilities as an actress.” 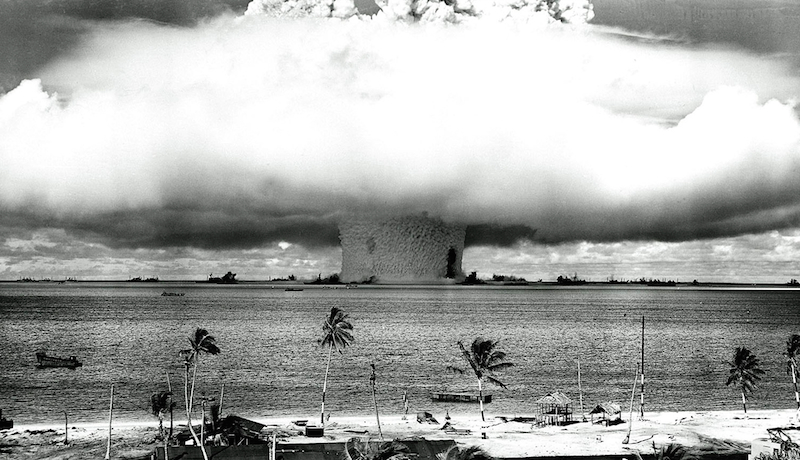 One of many galvanizing snapshots in Alan Taylor's piece, "70 Years Since Trinity: The Day the Nuclear Age Began," at The Atlantic.

That Synching Feeling from Insane Horizon on Vimeo.

Yusef Sayed's excellent video essay, "That Synching Feeling," which explores Brian De Palma's 1981 classic, "Blow Out," is accompanied by a provocative written analysis at his blog, The Insane Horizon.