"Frank Mosley on 'Her Wilderness'": At Indie Outlook, I interview the superb actor and filmmaker about his mesmerizing new picture scheduled to screen May 3rd as part of the Micro-Wave Cinema Series in Madison, WI.

“When I went to University of Texas in Arlington, I got an English degree, but I had a minor in Film. I made a lot of friends that were linked to David Lowery and Clay Liford and Yen Tan. They formed a community of Dallas Fort Worth filmmakers when I was in my early twenties and we were all struggling to make it. We would all hang out and watch movies and we ended up supporting each other. Even though we’ve all gone in different directions, I feel like having that community has been a backbone for me to draw upon. We always have friends that we can send cuts or drafts to, and as an actor, I consider myself fortunate to have worked with some really great people on some great films. I never thought in a million years that I would work with people like Jon Jost or Shane Carruth. Then there’s people like David Lowery who are just buddies of mine. When I told people that I worked on ‘Ain’t Them Bodies Saints,’ they were like, ‘How did you get on that?’ and I’d say, ‘We used to give each other rides to the store.’ If you want to make a movie, you have to be willing to know all the different components in order to be a good filmmaker. I think a great filmmaker is someone who has done all of those jobs—who has gaffed or AD’d and who has acted. You’re a better director if you know what it’s like to act, and as an actor, I am always understanding of the director’s wishes and ask a lot of questions. Understandably, there are a lot of actors I know who don’t think about the big picture and how their role fits into a movie. They think about themselves—their shot, their close-up, their screen time—and as a director, I can’t think that way, so that’s kind of how I am as an actor. As an actor, I’m like, ‘If you want to shoot this whole scene with just the back of my character’s head visible because it’s true to your vision and style, then that’s great.’ It’s not about ego, it’s about being a paint for the canvas and being used however is needed.” 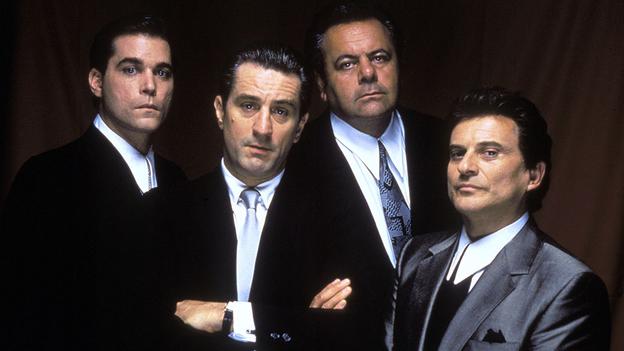 “Superlatives abound when people discuss Martin Scorsese’s 1990 gangster film ‘Goodfellas.’ ‘No finer film has ever been made about organized crime,’ wrote the late critic Roger Ebert. ‘Breathless and brilliant,’ is what Vincent Canby wrote in his review for The New York Times. But the initial response from the public at studio test screenings was ominous: there were reports of people walking out and the audience becoming agitated as they watched this sometimes harrowing story of a real-life New York mobster. Despite these early anxieties, ‘Goodfellas’ went on to triumph. It won widespread critical acclaim, success at the box office and earned six Oscar nominations. Twenty-five years later, its recognition as a classic is near universal. On 25 April, a special screening of ‘Goodfellas’ at the Tribeca Film Festival will reunite the original cast to bring the 11-day celebration of cinema in New York to a close. ‘Goodfellas’ is based on author and screenwriter Nicholas Pileggi’s 1986 bestseller Wiseguy. At the heart of the film is a striking performance from Ray Liotta who plays mobster Henry Hill. It’s the story of how Hill, who died in 2012, entered the world of organised crime as a young boy, then deepened his mafia involvement in a range of activities that included robberies, selling stolen goods, loan sharking, hijacking, arson and drug dealing. Hill eventually became an informant for the FBI and entered a federal witness protection program. But all the principal actors in the film give remarkable performances, from Lorraine Bracco as Henry Hill’s wife to Robert De Niro, Joe Pesci and Paul Sorvino as mobsters.” 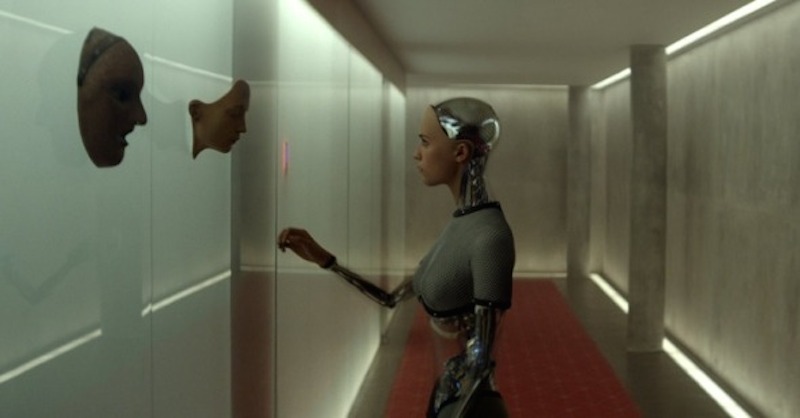 “Caleb’s sessions with Ava are loaded with a curiosity and wonder that give way to sexual tension, leaving the young man confused and perturbed. And the more Ava seems to desire Caleb, the greater is his belief in her humanity, as if he’s learned the lessons taught by stories from ‘Pinocchio’ to ‘The Fifth Element,’ which claim that the ability to love is what truly makes us human. Silly Caleb: Ava’s proximity to humanity lies not in her desire to learn and engage, as he initially feels, or even her ability to flirt or deceive, as he later coms to believe—such behaviors are easily mimicked, and conversely, not necessarily present in all humans. In ‘Ex Machina,’ the robot’s humanity lies in the fact that she has her own reasons for exhibiting all of the aforementioned behaviors, intentions behind her actions that may even go against the nature of her programming. This idea—that consciousness resides in the ability to desire—is not wholly original either; that alternately thrilling and horrific moment when A.I. develops emotion or intention is a science fiction staple from ‘2001’ to ‘Bicentennial Man.’ But what Ava wants also differs from past iterations of this parable. She seeks not the liberation of her entire people, the survival of a new robot species, world domination, or human enslavement. She is not acting under the instructions of her overlords, and her desire is awakened by neither pure congenital malice nor the transformative power of love. She wants nothing more than freedom, and for no one but herself.” 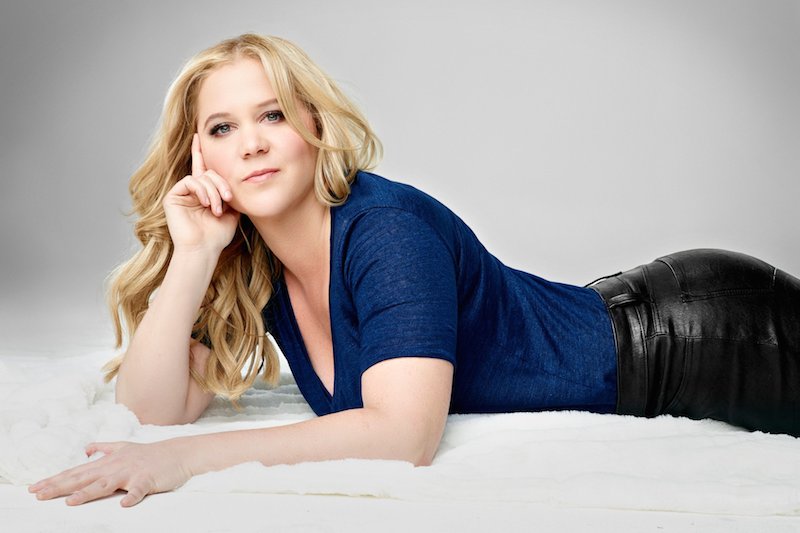 “Now I feel strong and beautiful. I walk proudly down the streets of Manhattan. The people I love, love me. I make the funniest people in the country laugh, and they are my friends. I am a great friend and an even better sister. I have fought my way through harsh criticism and death threats for speaking my mind. I am alive, like the strong women in this room before me. I am a hot-blooded fighter and I am fearless. But I did morning radio last week, and a DJ asked, ‘Have you gained weight? You seem chunkier to me. You should strike while the iron is hot, Amy.’ And it's all gone. In an instant, it's all stripped away. I wrote an article for Men's Health and was so proud, until I saw instead of using my photo, they used one of a 16-year-old model wearing a clown nose, to show that she's hilarious. But those are my words. What about who I am, and what I have to say? I can be reduced to that lost college freshman so quickly sometimes, I want to quit. Not performing, but being a woman altogether. I want to throw my hands in the air, after reading a mean Twitter comment, and say, ‘All right! You got it. You figured me out. I'm not pretty. I'm not thin. I do not deserve to use my voice. I'll start wearing a burqa and start waiting tables at a pancake house. All my self-worth is based on what you can see.’ But then I think, F—k that. I am not laying in that freshman year bed anymore ever again. I am a woman with thoughts and questions and s—t to say. I say if I'm beautiful. I say if I'm strong. You will not determine my story — I will. I will speak and share and f—k and love and I will never apologize to the frightened millions who resent that they never had it in them to do it. I stand here and I am amazing, for you. Not because of you. I am not who I sleep with. I am not my weight. I am not my mother. I am myself. And I am all of you, and I thank you.” 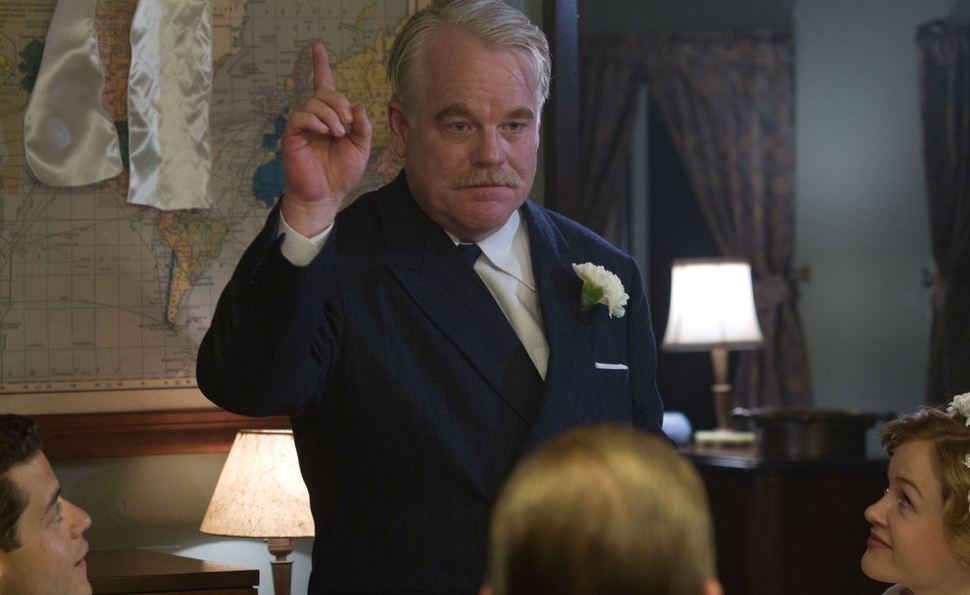 "The 5 types of father figures in Paul Thomas Anderson's films": Yet another essential essay from The Dissolve's Noel Murray.

“When ‘The Master’ was in production, there were rumors that it was about Scientology, but as always with Anderson, adaptation is a multi-layered process. Dodd was clearly inspired by Hubbard, but the film as a whole is more interested in America at the dawn of the 1950s, at a time when men scarred by the war were either integrating into or actively rebelling against a society increasingly geared toward soft civility. Dodd is another Jack Horner: a generous visionary who’s created a place where outsiders can congregate and feel welcome. And drunken, reckless libertine Freddie Quell (Joaquin Phoenix) is another Dirk, eager to be around someone so seemingly in control, who can say before he goes to bed each night, ‘We fought against the day and we won.’But Dodd’s weakness—and what sets him apart from other Anderson mentor characters—is his fascination with Freddie, who exemplifies mankind at its basest. ‘The Master’ is similar in some ways to Anderson’s ‘Punch-Drunk Love,’ in that it’s about someone whose emotions and impulses rise up and boil over in unpredictable, frightening ways. One of the great mysteries of ‘The Master’ is whether Dodd is drawn to this ‘silly animal’ of a man because he wants to understand what he’s up against as a prophet, or because he himself is soulsick, and compelled to misbehave. The Leland/Freddie relationship is an inversion of Daniel Plainview and Eli Sunday. Freddie is a lot like Daniel: venal and voracious, playing the devil on Dodd’s shoulder. But Freddie also does as so many Paul Thomas Anderson protagonists do, and forges his own ethos out of half-formed chunks of what he’s picked up from his elders. At the end of the film, Freddie repeats Dodd’s ‘processing’ lingo while having sex with a woman he picked up. It’s another example of how Anderson’s films contain many different kinds of fathers, but the generations they’re raising are populated by the same short-sighted screw-ups.” 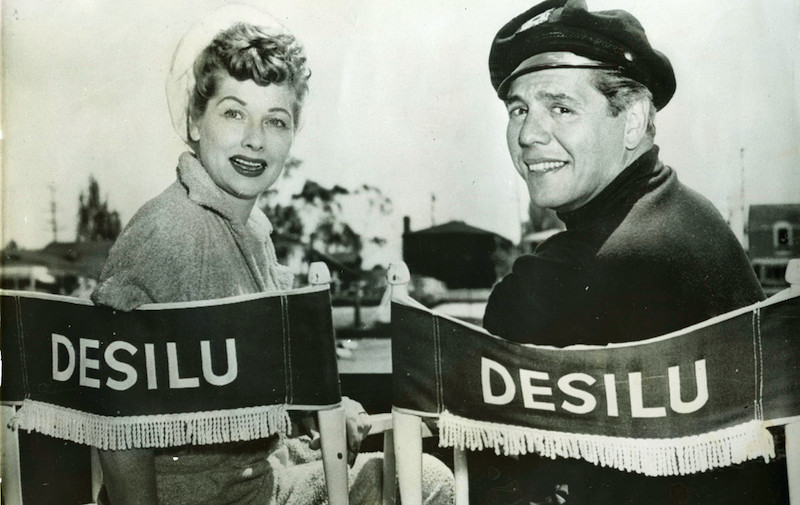 At The Huffington Post, Lily Karlin explains "How Lucille Ball Was More Revolutionary Than You Think."