"Jim Hemphill on 'The Trouble with the Truth'": Indie Outlook chats with the talented filmmaker and critic about his terrific indie (now available on Amazon Instant, iTunes, Vudu, and DVD), his friendships with Jonathan Rosenbaum and Walter Hill and his reaction to the enthusiastic review he received from Roger Ebert less than three months before the iconic critic's death.

“For grad school, I went to USC’s critical studies program in Los Angeles, and I started to meet all these great directors. You’d sit in a room with a couple dozen other people, and talk to Sydney Pollack or Wes Craven or Kathryn Bigelow or Clint Eastwood. I actually wrote a fan letter to Walter Hill and sent him a copy of my Chicago Reader ‘Trespass’ review. His assistant called me and said, ‘Walter read your review and he was really impressed. He wants to take you to lunch.’ Walter Hill was a god to me. He made the kind of movies that made me want to make movies, films like ’48 Hrs.’ and ‘Streets of Fire’ and ‘The Warriors.’ I struck up a friendship with him and started visiting his sets. Even though I was at film school studying to become a critic, my visits to Hill’s sets made me think, ‘Man, making films really looks like a lot of fun.’ So that’s what led me to become a director, and I’ve always had that push-pull ever since. I like writing about movies but I also like making them, and it’s kind of hard to do both. One of them always gets the short-shrift because they are all-consuming jobs. As you know, if you are going to write a review or interview somebody, you’re not just taking two hours to watch their movie. You’re researching the other things they’ve done. To me, the only downside of filmmaking is that it gets in the way of my film viewing. When you’re making a movie, you don’t have that much time to watch anything else. Paul Schrader has this great quote where he says that filmmaking is an act of birth and film criticism is an act of autopsy, and I think that’s very true. If you’re a critic, it can paralyze you as a filmmaker because you start thinking about how people will react to your work.” 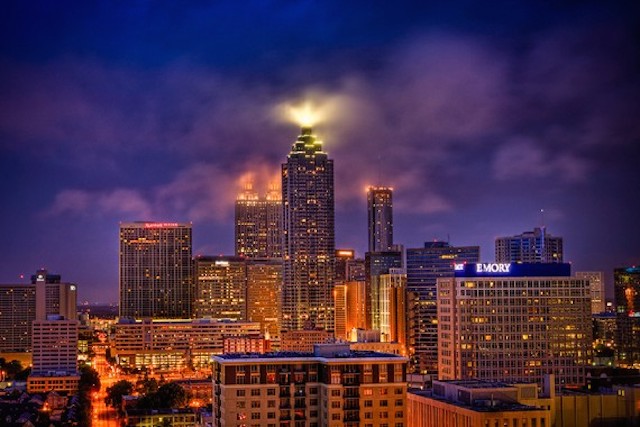 "How 1980s Atlanta Became the Backdrop for the Future": The Atlantic's Kristi York Wooten discusses how the work of architect John Portman has provided backdrops for thrillers such as "Divergent" and "The Walking Dead."

“Over the course of a century, the sci-fi genre invited viewers to travel through space and to dwell in the urban centers of tomorrow. A quaint cardboard rocket went to the moon in the 1902 silent film 'Le Voyage dans La Lune;' the largest soundstage in Europe housed the models that became space stations and death stars in 1977’s ‘Star Wars;’ and in 1999, ‘The Matrix’ combined next-level special effects with airborne action, upping the ante for how characters interact with architecture on film. Today, film editors use software to build up and tear down entire civilizations in a matter of keystrokes without leaving their desks. Yet one architect’s work is luring movie franchises such as ‘The Hunger Games’ and ‘Divergent’ to the rooftops of Atlanta, where forty-year-old buildings—and computer-generated environments—are locked in a pixelated power struggle. ‘Insurgent,’ the second installment of the ‘Divergent’ series (based on the dystopian young-adult trilogy about a world where free will is outlawed), was filmed in Atlanta and features aerial views of the architect John Portman’s hometown and mini empire, including more than a dozen blocks of real estate he designed and developed along the Peachtree Street business corridor. Although the 90-year-old Portman had nothing to do with the film’s production, images of his high-rise architecture inform the story as much as any of the sequel’s digitally enhanced action sequences. Portman’s buildings bring an element of realism to the movies in an age where the competition between physical structures and green-screen graphics is visual and tangible. Unlike video games and animation, live action requires both photography and architecture to convey a sense of place and time, even if that place is light years away.” 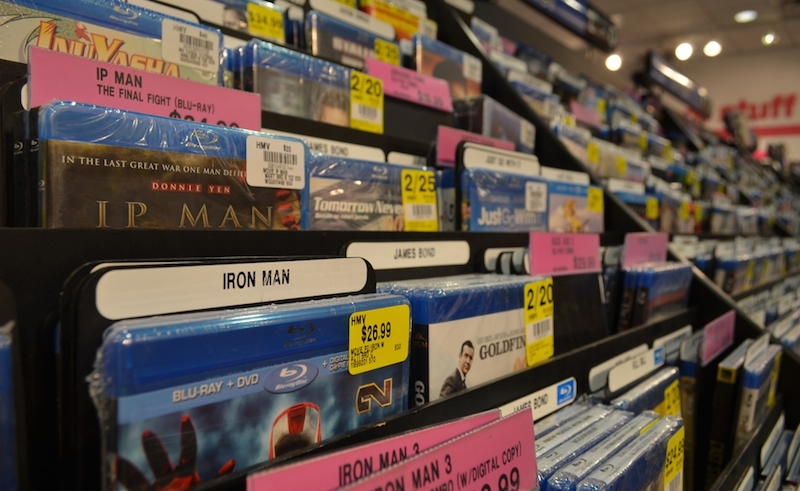 "How to make the Blu-ray relevant again": Essential advice from The Dissolve's Keith Phipps.

“Blu-rays are for collectors, cineastes, and connoisseurs: Treat them accordingly.DVD is an outmoded technology. It’s impossible to overstate how important it was to the evolution of home viewing. Improving on the Laserdisc and bringing its innovations to a much broader market, the format emphasized presentation, making films look and sound better than ever before, and presenting them in their proper aspect ratio. DVDs also emphasized depth. The best ones doubled as annotated editions of films, using special features to contextualize them via audio commentaries, making-of docs, and other added elements. Gone were the days when a muddy, cropped VHS tape would have to do. DVDs will live on, but their time as the best format for current televisions has passed. They look fine, but those who care about having the best possible versions of notable films know that Blu-ray is superior to DVD, and that Blu-rays’ expanded storage capacity can let them hold more special features. That’s your audience. And while economically, it might not be a large enough audience to support the suggestions I’m about to make, let’s indulge in a bit of blue-sky thinking and assume it is, or that it can be grown to be large enough.” 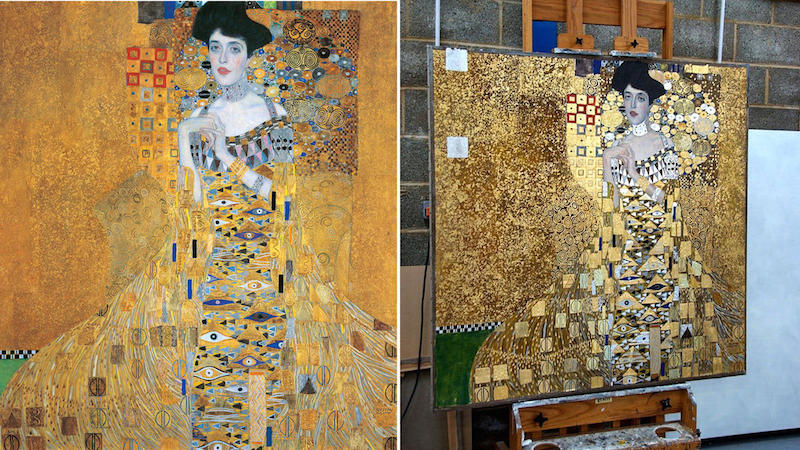 “‘If we didn't have a stellar reproduction, we'd be dead in the water,’ said the film's director, Simon Curtis. ‘It was a big mountain to climb, and on top of that we had to cast an Adele [German actress Antje Traue] that looked like her in the painting.’ The film, which screened at the Berlin International Film Festival to mediocre to negative reviews in February (Curtis has since made changes), does indeed carry the burdens that come with a history-based tale. For Curtis and his team, the challenge was as immense as bringing Marilyn Monroe to life, believably, in the director's 2011 drama, ‘My Week With Marilyn.’ ‘This is probably one of the most complicated paintings for its size that you could ever be asked to do,’ said the scenic artist behind ‘Woman in Gold,’ Steve Mitchell, who has worked on hundreds of films including ‘Children of Men,’ the ‘Harry Potter’ franchise (for which he painted wizard portraits) and Woody Allen's ‘Match Point.’ Klimt took three years to complete his magnum opus. Mitchell had to finish his in five weeks. He also made a half-completed version for a shot that is supposed to take place in Klimt's studio (he was the hand model) as well as a 2-foot-square center section that was used for extreme close-ups. To do this Mitchell pored over all the research he could find about Klimt and his process — in books, on the Internet, in documentaries — only to find that Klimt was quite secretive. Adding another level of difficulty was the amorphous nature of gold leafing, which can cause the look of a painting to vary depending on the light with which it is photographed. ‘I had something like 50 reproductions to work from, and I don't think there were two that were the same,’ Mitchell said of the Byzantine-esque painting. ‘I was trying to take a mean average from all those reproductions. But at the end of the day, the film is another photographic medium, so you're not seeing the true colors then either.’” 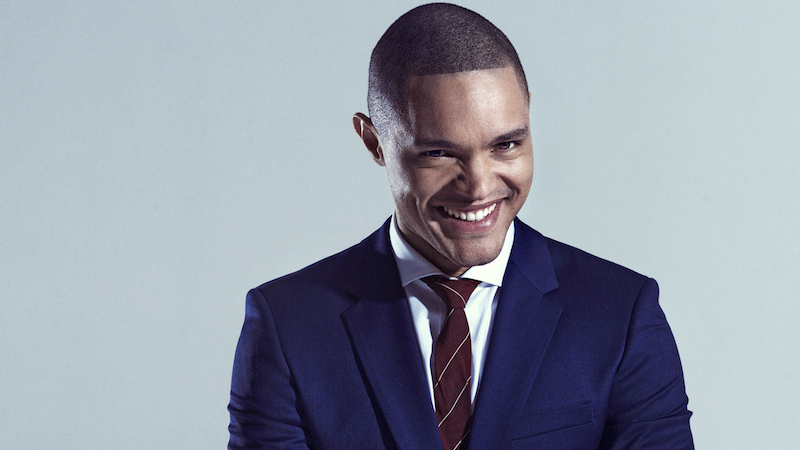 "In defense of Trevor Noah's stupid, tasteless tweets": A great piece by Caitlin Dewey of The Washington Post.

“Noah has tweeted a grand total of 8,904 times since joining Twitter in June 2009; if you do the math on that, it means the comedian has been sending roughly four tweets per day since he was just a hair over 25 years old. Six of those 8,904 tweets — in other words, .067 percent of Noah’s total Twitter output — were offensive. Terribly offensive. I mean, let’s not gloss over this: They were terrible, stupid, ignorant, unfunny jokes about things like overweight women and Jews. Regardless of whether you think these sorts of stereotypes and cheap shots are theoretically acceptable in comedy — let’s not forget that, even as the Noah controversy unfolded, Comedy Central was airing a fantastically nasty and racially tinged Justin Bieber roast — they’re not even good or clever or nuanced cheap shots. They are bad, stupid jokes. They have no redeeming quality. And yet: six tweets, out of almost 9,000?! That’s not exactly a representative sample. ‘We’re trying to define each other by the worst tweet we ever wrote,’ Jon Ronson, the author of a new book on online shaming, recently told NPR’s Steve Inskeep. ‘We’re trying to see people’s tweets as like a kind of clue to their inherent evil, even though we know that’s not how human beings actually are.’ Because human beings are, in reality, flawed: prone to errors in judgment or youthful indiscretions or drunk texts/tweets/status updates they really never should have sent. A lot of people have made bad jokes in their 20s. The only difference now is that those jokes are memorialized forever on the Internet — and readily ripped out of their chronological context, and away from their intended audience, as contemporary proof of their sender’s bias or stupidity or ill intent.” 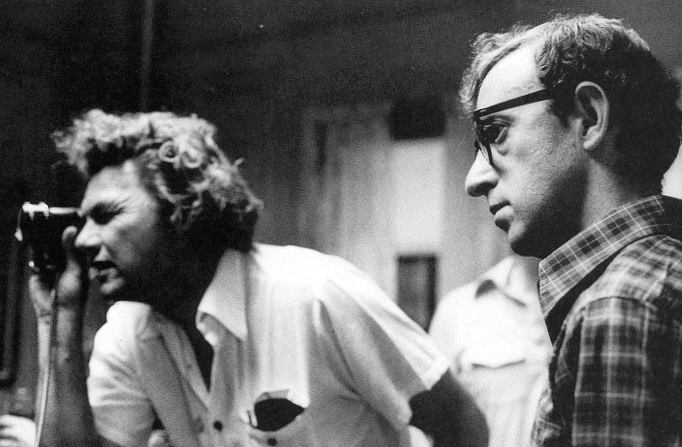 At Indiewire, Steven Benedict presents an excellent video essay exploring the framing techniques of cinematographer Gordon Willis in over 25 films.