“The outrage over the Oscar nominations has been welcome even if the problem isn’t the Academy Awards but a blinkered, fossilized industry that offers so few opportunities to women and minorities. Ms. DuVernay is one of the few female directors to make the leap into the major studio world. While it’s disappointing that she wasn’t nominated, she made a great movie and is going to keep directing without the permission of the mainstream old guard. The good news is that she won’t be alone. Increasing numbers of people — if mostly women — are pushing back hard at the industry’s biases. And they’re pushing back publicly, a gutsy stance in an industry that runs on secrets, lies and fear. Some of these activists, like Geena Davis, are focusing on female representation in the media; others, like Maria Giese, a member of the Directors Guild of America, are going after their own organization. Gamechanger Films is practicing checkbook activism by funding female directors. The Sundance Institute and the advocacy group Women in Film have commissioned an important study for which researchers like Stacy L. Smith are crunching the numbers. Consider some recent findings: Only 4.4 percent of the top 100 box-office domestic releases between 2002 and 2012 were directed by women. In 2012, only 28.4 percent of all on-screen speaking characters in the top 100 were women. If you thought women in movies don’t have much of a voice, you’re right.” 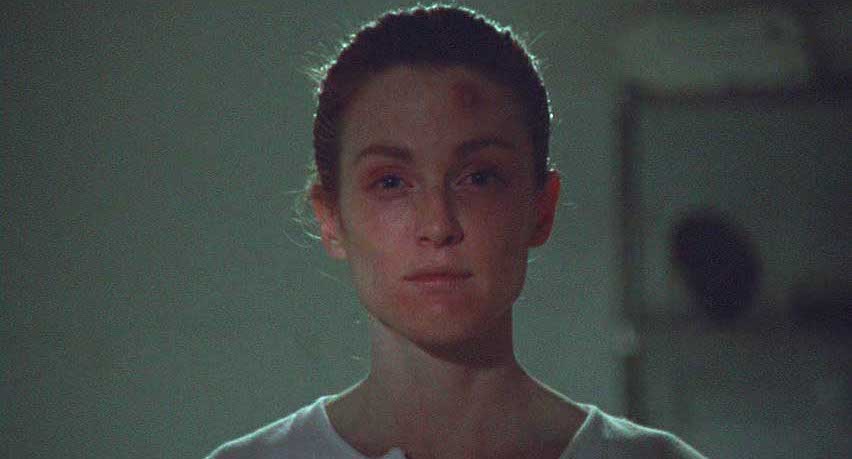 "Neither Safe Nor Still: The Genius of Julianne Moore": At Indie Outlook, I contrast Moore's Oscar-nominated work in "Still Alice" with her landmark performance in "Safe," the Todd Haynes masterpiece celebrating its twentieth anniversary this year.

“‘Safe’ is as intensely uncomfortable as ‘Still Alice’ is palatable to the mainstream, right from the opening scene of Carol enduring a session of passionless lovemaking with her husband before planting a chaste kiss on his cheek. She is entirely disconnected from her life long before her illness strikes—even her stepson coldly treats her like an unwelcome stranger. ‘She doesn’t want to be in anyone’s way,’ Moore explains in the commentary. ‘I tried to keep my voice unconnected to my body by talking above my vocal chords, which gave it a breathy, bodiless quality.’ This persona couldn’t be further removed from the conviction that Alice maintains at work and home even as her memory starts to flicker away. The topic of ‘love’ is mentioned at length in both films, yet only ‘Alice’ contains any actual traces of it. When she says the word late in the film, she affirms the fundamental clarity of feeling that remains in her mind even after everything else has gone out of focus. When Carol says, ‘I love you,’ to her reflection in the profoundly haunting final shot of ‘Safe,’ she’s simply regurgitating words with little understanding of their meaning. One suspects that Carol has never truly experienced love, and therefore has no clue of how to love herself, resigning to live a life of superficial contentment devoid of emotional intimacy. An especially frightening moment occurs when Carol sports glimmers of Alzheimer’s, suddenly forgetting who and where she is while sitting in bed. Both ‘Safe’ and ‘Still Alice’ convey the primal horror of a bleak diagnosis resulting in one’s own imprisonment. Carol ends up imprisoned in a ‘safe room’ cut off from all human contact—in essence, a spacious coffin—while Alice is imprisoned in her body.” 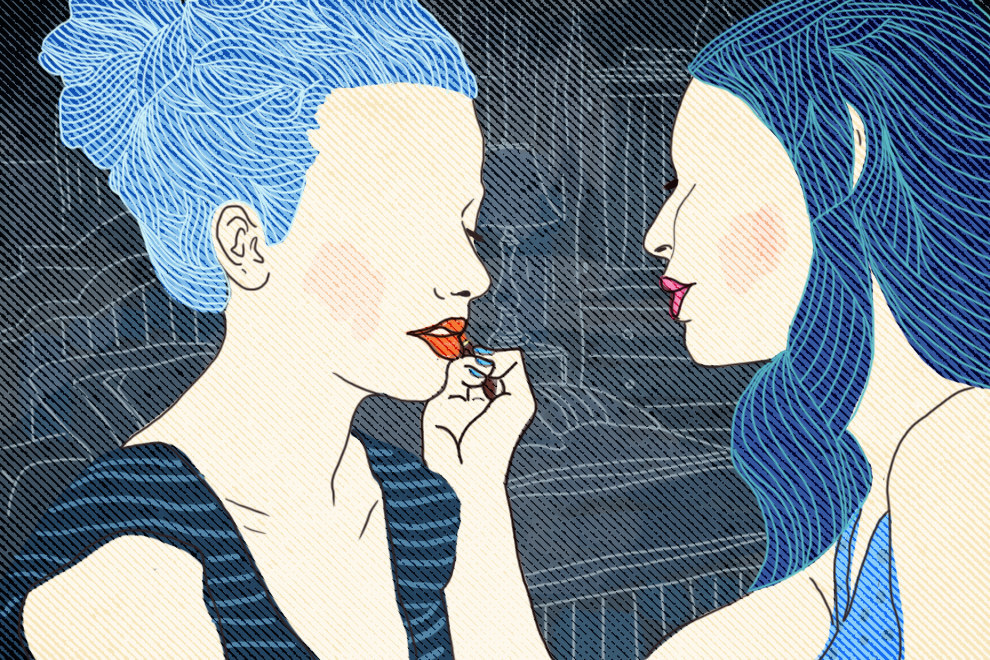 "A Bridge Between Love and Lipstick": BuzzFeed's Arabelle Sicardi pens a superb piece on makeup, identity and the beauty industry.

“Makeup is by no means natural. That’s the point. If I work hard to survive, you will pay attention when you see me, and you will see the work. Because it is work: to survive, when others would wish otherwise. They want us to disappear if we can’t be what they want. But beauty lets me see myself the way I need to be seen; it is redemptive in ways that I often don’t have the courage to be verbally. I let it speak for me, at least the preliminaries of getting to know me: This is weird, you might not like it, but if you do — come here, you see me as I am. Hello. That’s what fascinates me about makeup: its ability to help you actively become, however temporarily. It’s making what you need to survive out of what you have to work with. Ask the girls who don’t feel quite themselves without doing routine, filled eyebrows before they leave the house. This processing of potential, pushing past the point of expectation of who you have to be for other people to reach who you want to be for yourself — that’s beauty, gone queer. Because queerness is sexuality, yes, but it’s also an identity that implies resistance and reaching for something else. Something better for us than what we’ve found in a society that would have us be anyone but ourselves.” 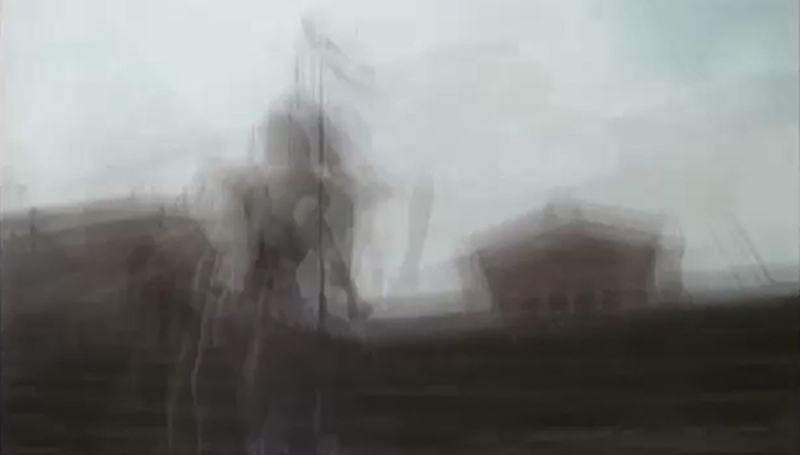 "The Body and the Camera: Adrià Julià on Rocky Ascending": KCET's Jennifer Doyle analyzes how Julià's work reflects intersecting histories, including the development of camera technology.

“‘Rocky's Ghost Ascending the Stairs’ and ‘Rehearsal for Cameramen’ or ‘Recording Machines’ are just two chapters in Julià's exploration of the history and poetics of the body's relationship to the camera. It is atypical, in a way -- the body within this project is usually the body behind the camera, not in front of it: the hand that grips the camera, the shoulder which supports its weight, the finger that holds a button down - Julià created a series of sculptures of hands, and used stop-motion animation to make spooky films of a hand making the press/record gesture. Julià has been exploring images of filmmakers standing next to their cameras, and speculating on the fleshiness of the cinematographer's relationship to the instrument of his or her craft. The artist's project mines the twinned stories of the development of Aäton shoulder-mounted cameras of the early 1970s (invented by Jean-Pierre Beauviala) and Brown's Steadicam (invented in also in 1970s). Both facilitate camera movement. But, the artist explains, they create ‘diametrically different or opposite possibilities.’ They are different in ‘their production value, weight, ergonomy, use.’ They facilitate different practices of authorship, and different forms of subjective experience for the viewer. What, Julià seems to wonder, is the experience of these cameras for the person who holds or operates them? What is the relationship between the body behind the camera and the body in front it? How does the shape, the structure of the camera inform that relation?” 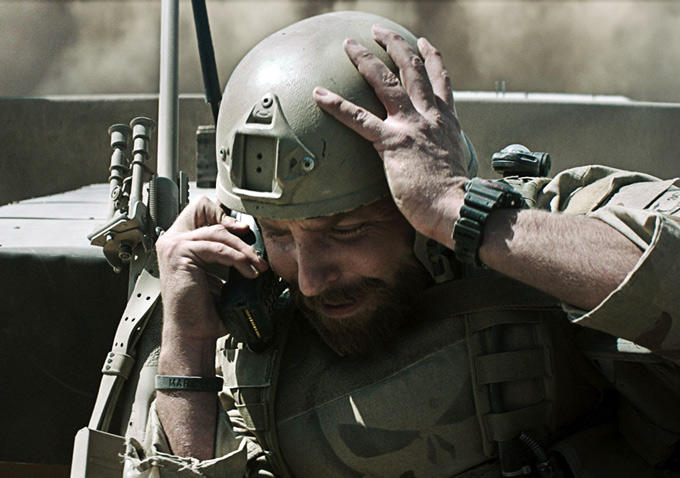 “The movie loves guns. Guns are the answer to the savage animals, the answer to freedom. Guns are everywhere: on the battleground, around the house, in makeshift shooting ranges. Clint Eastwood himself is a huge fan of guns and like a large segment of our country, no number of mass murders has changed that. (Between 2000-2013, 486 people were killed in mass shootings.) In fact, part of Kyle's post-war psychological and social rehabilitation is bonding over some good-natured target practice. There's nothing like the sound of a gunshot to bring someone back to a peaceful emotional state. Like our view of guns in the United States, guns in the movie are shown in only two ways: 1) killing horrible savages that deserve to die, and 2) recreationally. But the moment that Kyle actually loses his own life to a gun – a gun that was left in the hands of a deranged veteran who had just been released from a mental hospital – that moment is not shown onscreen. Because that would mean that guns are anything but totally awesome and necessary. That would have been an admission that guns sometimes fall in the wrong hands, that maybe we should take a closer look at who is able to get a gun in this country. Because guns didn't make Kyle safer; they made him dead.” 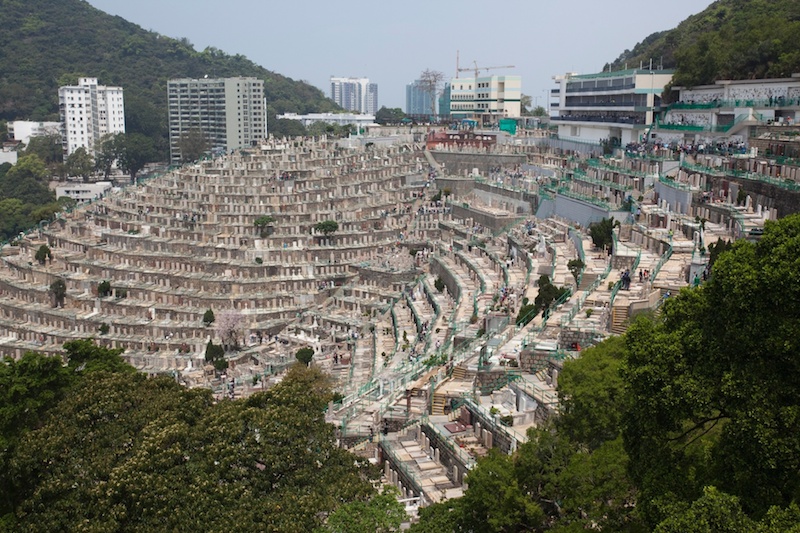 The Guardian has posted incredible images of "the crowded hillside cemeteries" in Hong Kong.

For BBC News, singer-songwriter Steve Earle discusses how Truman Capote's "In Cold Blood"—adapted for the screen in 1967 by director Richard Brooks (see the astonishing clip above featuring Robert Blake and lensed by Conrad Hall)—became "the book that changed him."