The Lady from Shanghai

The Ebert Club would like to present the noir film "The Lady from Shanghai" by director Orson Welles, streaming free. And to explore an even greater assortment of finds and discoveries, please join the Ebert Club. Your subscription helps support the Newsletter, the Far-Flung Correspondents and the On-Demanders on Roger's site.

"Although The Lady From Shanghai was acclaimed in Europe, it was not embraced in the U.S. until several decades later. Influential modern critics including David Kehr have subsequently declared it a masterpiece, calling it "the weirdest great movie ever made." - wikipedia 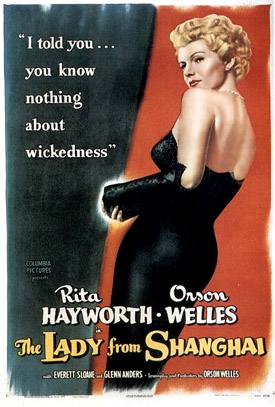 The Lady from Shanghai (1947) Directed by Orson Welles. Screenplay by Orson Welles. Based on the novel by author Sherwood King. Uncredited writers: William Castle, Charles Lederer and Fletcher Markle. Starring Rita Hayworth, Orson Welles, Everett Sloane, Ted de Corsica, Erskine Sanford, Glenn Anders, Gus Schilling and Carl Frank. With Cinematography by Charles Lawton Jr.Synopsis: Against his better judgment, Michael O'Hara signs on as a crew member of Arthur Bannister's yacht which is sailing to San Francisco. En route, they pick up a man named Grisby; Bannister's law partner. Bannister also has a wife, Rosalie, and who appears to like Michael more than her husband.After they dock in Sausalito, a strange plan is proposed by the law partner: namely; Grisby wants to fake his own murder so he can disappear without anyone trying to find him. Michael agrees to the scheme because he wants the $5000 Grisby has offered him - so he can run off with Rosalie. But when Grisby actually turns up murdered, Michael gets blamed for it. Somebody set him up, but it is not clear who or how... Note: The yacht Zaca (used in the film) was owned by actor Errol Flynn, who skippered the yacht in between takes, and who can be glimpsed in the background during a scene filmed at a cantina in Acapulco.Twelve years later, in need of money, Errol Flynn (accompanied by 17-year-old starlet Beverly Aadland) flew to Canada in order to sell his yacht to a millionaire friend; stock promoter George Caldough. Flynn suffered a heart attack and died in a West End apartment on October 9, 1959 in Vancouver. He was 50 years old.

Go here to watch "The Lady from Shanghai" on Crackle.com
Advertisement