"It was pretty bizarre."

That's how Peter Bogdanovich recalls his reaction to watching "At Long Last Love," his 1975 Cole Porter musical, on Netflix nearly 40 years after its ill-fated release. You know how they say that the hallmark of a classic is that you can always find something new in it? "At Long Last Love" may not be a classic, but this version was, unbeknownst to him, a world apart from the theatrical release he had all but disavowed.

"Scenes (and musical numbers) I had cut were back in, and they were so good, I said to myself, 'Why did I cut those out," he laughs. "I realized as I was watching that all the decisions that were made about the picture back then were just not done with a clear mind. We were rushed. It was just ugly. We never got the picture right. We never got the chance."

And now, nearly four decades later, "At Long Last Love" is getting its chance to find its audience in a dazzling Blu-Ray edition, its first-ever home entertainment release in a "definitive cut" — assembled surreptitiously from the original shooting script by a Cole Porter fan in the Fox editorial department and released into syndication years ago without Bogdanovich's knowledge — that the director embraces.

"At Long Last Love" is a testament to the clout Bogdanovich yielded at the time as one of the most successful of the so-called "New Hollywood" directors that included William Friedkin, Francis Ford Coppola, Martin Scorsese, Steven Spielberg and George Lucas. He had enjoyed an extraordinary run with the critical and box office successes, "The Last Picture Show," "What's Up, Doc?" and "Paper Moon," all f which illustrated his affinity with Old Hollywood and the directors he masterfully profiled for Esquire and other publications. And so when he said he was going to make an original musical comprised of standards from the Cole Porter songbook at a time when musicals were box office poison, he got the greenlight.

The inspiration for "ALLL" came from Cybill Shepherd, whom he had cast in "The Last Picture Show" and in the lead role in "Daisy Miller," and with whom he was then living. She presented him with a coffee-table book of Cole Porter lyrics. One of the tunes, "I Love Him (But He Didn't Love Me") would serve as the kernel for the story of six people in various stages of love and misbehaving: A bored millionaire (Burt Reynolds); his valet (John Hillerman) a socialite (Shepherd), her chaperone (Eileen Brennan); a stage actress (Madeline Kahn) and a Latin gambler (Duilio Del Prete).

"I was most inspired by the Ernst Lubitsch musicals of the 1930s, 'The Love Parade,' 'Monte Carlo,' 'The Smiling Lieutenant,' 'One Hour With You,' and best of all, 'The Merry Widow.' I loved those musicals that sort of made fun of musicals at the same time they were celebrating them."

Bogdanovich began the script during the making of "Daisy Miller." When it was completed, he shared it with "Paper Moon" screenwriter Alvin Sargent. He did not solicit feedback from any of his peers. "My friends in those days were not the young turks, but the old turks: Hitchcock, Howard Hawks, Allan Dwan, Fritz Lang, Cary Grant, Jimmy Stewart, and so on. I had one foot in Old Hollywood and one big foot in New Hollywood.

"I'm embarrassed to tell you this story, but I'll tell it anyway. Gene Kelly called me and asked if I needed any help. I said, 'No, I'm fine, Gene, thanks.'"

The ensemble was comprised mostly of his stock company who had graced his previous films. Bogdanovich wrote their roles with each in mind. The exception was Burt Reynolds, then the leading male box office and action star of the day. It's another testament to Bogdanovich's clout that he got the star of "Deliverance" into a tuxedo.

"He had the same agent I did: Sue Mengers," Bogdanovich recalls. "I had originally been thinking of using Elliot Gould, but she convinced me to use Burt, who didn't really sing or dance. Orson Welles was a big fan of his. I met him and I liked him. And he worked very, very hard on the picture. One of the things I later regretted cutting from the initial release (since restored) is the scene in which he and Madeline sing 'You're the Top' on the couch. He did it brilliantly and later told me it was his favorite scene in the picture. One of the things that pleases me about this coming out again is that people can see how terrifically versatile he was."

Bogdanovich set for himself and his cast a formidable challenge: to record the musical numbers live just as was done in Lubitsch's day. "School of Rock," "Les Miserables," "Bernie" and a few other films also employed this technique, but it's a rarity, because it results in a record of an individual performance that's bound to be flawed. Most musicals have actors lip-synching to pre-recorded vocal performances that have been edited together from several takes, then sweetened to make them sound as perfect as possible.

"I love the spontaneity you get in the early musicals," Bogdanovich says. "I thought since (the film) was kind of kidding musicals at the same time it was celebrating them, I thought if somebody goofed, it would be interesting. The best example of this is the scene in the swimming pool when Cybill pops Burt's nose plug and it hits his teeth. That was absolutely spontaneous, and you can see them almost break up. I just love that." 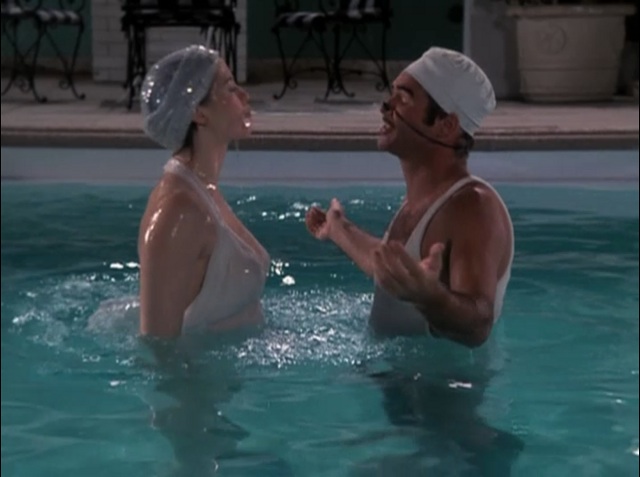 He gives full credit to the game cast for rising to the occasion. "None of the numbers were easy," he says. "I was very proud of them when I saw the film again. They did an extraordinary job. I look at the 'Friendship' number in the nightclub that has no cuts in it. They are all so good."
Advertisement

It is here that the story of "At Long Last Love" hits a sour note. "One of the problems with the first cut," Bogdanovich says, "was finding the right balance between dialogue scenes and musical scenes. You can't do it in a vacuum. You can only find that balance by showing the film to audiences. We only previewed it twice. The first was at the Cinerama Dome. I specifically asked the studio not to (book the movie there). It was a regular, flat movie, and not in the wide screen format, so it was out of focus when projected. Plus, the sound mix was bad. It was a technical disaster, but we couldn't tell if it was the movie's fault or the fault of the technical aspects. It was next previewed in Denver and it played pretty well. Then I was pushed to make certain other cuts that I didn't want to make by some people that I trusted, a couple of whom turned out to be a little two-faced. I made those cuts. That was the worst version of all."

The critics had a field day with the movie. Bogdanovich believes that the animosity was directed more toward himself and Shepherd than the film itself. He had left his wife for Shepherd and in 1974 they had appeared in People magazine under the headline, "Who Needs Marriage?"

"During that period," Bogdanovich recalls, "Cary Grant called me and said, 'Peter, for Christ's sake, stop telling people you're happy. Stop telling people you're in love.' I asked him why and he said, 'Because they're not happy and they're not in love.' I said, 'I thought all the world loves a lover,' and he said, 'No, don't you believe it. Let me tell you something: People do not like beautiful people,' which I thought was an extremely interesting remark."

One critic who was kinder to the film was Roger Ebert. "It's impossible not to feel affection," he wrote in his two-and-a-half star review. "It's a light, silly, impeccably stylish entertainment.… I can't account for the viciousness of some of the critical attacks against it."

"I loved Roger," says Bogdanovich, who wrote a tribute to him after he passed. "He really loved the movies. He was at his best in the pieces he wrote in which he praised a movie, especially the classics. He was terrific on that; personal and historically accurate as well. I miss him."

He recalls one extraordinary Ebert encounter that he calls "very rewarding." It was on a film festival cruise in which they were both participating. In the morning, Ebert conducted sessions in which he analyzed "Citizen Kane" shot-by-shot. "We were sitting at lunch or dinner," Bogdanovich said, "and I told him an anecdote that Orson Welles had told me about how William Randolph Hearst (upon whom Kane was said to be based) had accidentally shot producer Thomas Ince. Roger had never heard it and thought it was fascinating. I told him that Orson originally had a murder in "Citizen Kane," but that he cut it out of the script because he didn't think it would be in character for Charlie Kane.

"Roger said that would make a good movie and I told him I had never thought about that. I got home from that trip — I swear this is true — and on my desk is the script for "The Cat's Meow," based on the story I had told Roger. I had never told anyone that story. I told Roger, and he said, 'Sounds like you ought to make the movie,' and I said, 'It looks that way, doesn't it?'" ("The Cat's Meow" was released in 2001 to his best reviews in years).

It's a cliché when talking about films from the New Hollywood era to say that they could never get made today. But perhaps, with musicals enjoying a renaissance, that wouldn't be the case for "At Long Last Love"

"Doubtful," Bogdanovich pondered. "'Les Miserables' was a huge hit on Broadway for years and played all over the world. If it hasn't been a huge hit, they would have never made it. The same with 'Chicago.' An original musical would be pretty tough to do."

Such are the vagaries of Hollywood financing and distribution that Bogdanovich says it was difficult to get his next film, the comedy "Squirrels to the Nuts," off the ground, despite a cast that includes Owen Wilson and Jennifer Aniston, and features Shepherd in her first appearance in a Bogdanovich film since "Texasville." "Comedies don't translate that well to foreign markets," he says. "If it isn't a superhero movie or something that's been a hit lately, the money is tight."

As the business of film has changed, so has film culture, Bogdanovich also observed. "There are good critics around, but there isn't the lively debate that existed in the '60s and '70s in America. Pauline Kael and Andrew Sarris were writing torpedoes to each other (in debating the auteur theory). It was a different, more interesting time in terms of debate. Film was more of a cultural phenomenon. But to be fair, the movies aren't the way they were. Most studio movies are lamentable."