Joy and Triumph: Reclaiming the Image of Black Women in Cinema

When it comes to the subject of Black womanhood, American cinema has rarely been kind. Depictions of Black women have been steeped in stereotypes from the Mammy (think "Gone To The Wind") to the Best Black Supportive Friend (think Jennifer Hudson in "Sex and the City"). Black female characters are banished to near invisibility in "helping roles" or in roles of extreme suffering and pathology. Even with Lupita Nyongo's wonderful, Oscar-winning performance in "12 Years a Slave," the Patsey character was still rooted in Black female suffering; an image the Academy has acknowledged excessively. The only African-American actress to win a Best Actress Academy Award is Halle Berry, for playing a Black woman steeped in suffering and pathology in "Monster's Ball."

This isn't meant to denigrate or marginalize these actresses or their breakthrough performances, but to call out the one-sidedness with which Black women are viewed. What hasn't being told or portrayed by most major studios are the joys and triumphs of Black women. It's been 21 years since Angela Bassett brought Tina Turner's story to life in "What's Love Got To Do With It" (hint: Tina won). No Black actress has ever won an Oscar playing a social activist like Sally Field’s “Norma Rae,” or a political powerhouse like Meryl Streep’s “The Iron Lady.”

To let Hollywood tell it, Black women are only validated through pain and struggle, but almost never through happiness or success. We are usually the victim of tragic circumstances, but rarely the agent of change in our own lives or the world around us. Thankfully, filmmakers like Gina Prince-Bythewood, Ava DuVernay, Amma Asante and Dee Rees are boldly reclaiming the image of Black women, imbuing them with complexity, imagination and personal power.

Bythewood, who directed the heartwarming sports/romance hybrid "Love and Basketball" (2000), turns her eye to the cutthroat world of the music industry with her latest offering, "Beyond The Lights." Noni Jean (Gugu Mbatha-Raw) is a beautiful British pop star on the verge of superstardom with her debut album, but experiencing a silent crisis. Trapped between a money hungry record label, a ruthless manager (Minnie Driver) and a demanding fan base, Noni opts to remove herself from the equation when she is saved by Officer Kaz Nicols (Nate Parker). While her love affair with Kaz is the catalyst for Noni's liberation, Noni is the one who does the painful work of self-examination and risking her career to follow her own path.

Blythewood uses Nina Simone's "Blackbird" as a recurrent theme to illustrate Noni's path to freedom. When the film opens, she performs the song as a youngster in a talent pageant, which showcases her powerful vocals at such a young age, but too young to understand the significance of lyrics. We then see Noni perform the song later in the film as an adult, at a local Mexican karaoke bar. Beyond the bright lights and away from her adoring public, Noni connects to the song with age and experience, and finally comes to understand the weight and the enormity of Simone's lyrics:

Mbatha-Raw is simply mesmerizing in this scene, as we see Noni finally break open, embracing her pain and insecurities. By shedding the hyper-sexualized and commodified image created for her, Noni comes through on the other side, fully herself. When the real Noni takes the stage at the end of the movie, she takes Simone's plaintive ballad and turns it into a song of joy and rebirth:

"I'm free at last, free from you,
Free from the past, freedom at at last,
What is life, other than a cage to me
Oh Blackbird, sing one last song for me" 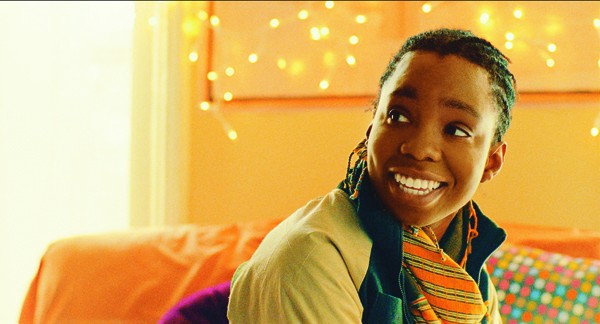 We witness similar themes of liberation and creative freedom in Dee Rees' "Pariah." In one of the rare portrayals of Black teenage lesbians, Alike (Adepero Oduye) struggles to keep the facade of the "perfect daughter" while coming to terms with her same-sex attraction. Following a heartbreaking scene with her lover, Alike comes out to her parents and is disowned by her mother. Instead of becoming a victim of her circumstances, Alike owns her true identity and pursues her dreams of writing, attending a West Coast college on full scholarship. Before Alike embarks on this new chapter in her life, she recites a poem to her creative writing teacher:

"For even breaking is opening,
And I am open, I am broken.
Broken to the new light without pushing in.
Open to the possibilities, pushing out."

In "Middle of Nowhere," we see another example of a Black female protagonist pursuing her bliss. With a husband serving an eight-year prison sentence, Ruby, once a bright and promising pre-med student, has become a shadow of her former self. Between working grueling double shifts as a nurse, prison visits with Derek, and footing all the legal bills, Ruby's hopes of happiness are all pinned on her husband's early release. Like Noni and Alike, Ruby finds a release through the power of words; her weekly letters to Derek have a decidedly poetic bent. When a secret betrayal by Derek comes to light, Ruby is left at a crossroads. After a brief romantic dalliance with bus driver Brian (David Oyelowo), Ruby decides to choose herself, and leaves Derek with these final words:

"The past has disappeared,
And the future,
It doesn't exist til we get there"

Amma Asante’s lush period drama “Belle” is based on the true life story of an 18th century aristocrat, Dido Elizabeth Belle, raised in British high society, but shunned because of her biracial identity. Belle would influence her grand-uncle, Lord Mansfield, to set forth legislation that led to the abolishment of slavery in England. By taking a stand against the subjugation of human beings, Belle learns to stand up for herself and be unapologetic of the color of her skin.

We can expect to see more visions of Black female agency on the big screen, as Mira Nair recently announced her next project “The Queen of Katwe,” based on the real life story of Ugandan chess prodigy Phiona Mutesi, who will be played by former intern and family friend Lupita Nyong’o. Quvenzhané Wallis, who became the youngest Best Actress nominee in Academy history for playing the heroic Hushpuppy in “Beasts of The Southern Wild,” will be featured in the remake “Annie” (out this December), and will play a young mathematical genius in “Counting by 7’s.”

With this new wave of women filmmakers of color, the spectrum of Black womanhood has been expanded beyond the images of victimhood and suffering. We are joyful. We are triumphant. We are liberated. We are the heroes of our own stories. And we will not be silenced.

Note: Come back tomorrow for an interview with Gina Prince-Bythewood. Read Odie Henderson's four-star review of "Beyond the Lights" here.