The Ebert Club is pleased to share the following Film Noir cult classic, streaming free. I invite you to join the Club and dive into an eclectic assortment of wonderful and curious finds. Your subscription helps support the Newsletter, the Far-Flung Correspondents and the On-Demanders on my site. - RE"The movie has above all effortless charm. Once we catch on that nothing much is going to happen, we can relax and share the amusement of the actors, who are essentially being asked to share their playfulness. There is a scene on a veranda overlooking the sea, where Bogart and Jones play out their first flirtation, and by the end of their dialogue you can see they're all but cracking up; Bogart grins during the dissolve. The whole movie feels that way. Now that movies have become fearsome engines designed to hammer us with entertainment, it is nice to recall those that simply wanted to be witty company." - Roger, from his Great Movies review of "Beat the Devil". 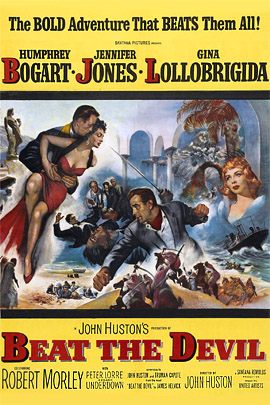 Beat The Devil (1953) Directed by John Huston. Co-written by John Huston and Truman Capote. Loosely based upon a novel of the same name by British journalist and critic Claud Cockburn; pseudonym James Helvick. Starring Humphrey Bogart, Jennifer Jones, Gina Lollobrigida, Peter Lorre, Robert Morley, Edward Underdown, Ivor Barnard, Marco Tulli, Bernard Lee and Saro Urzì.Synopsis: A quartet of international crooks - Peterson, O'Hara, Ross and Ravello - is stranded in Italy while their steamer is being repaired. With them are the Dannreuthers. The six are headed for Africa, presumably to sell vacuum cleaners but actually to buy land supposedly loaded with uranium. They're joined by others who apparently have similar designs. It was intended by Huston as a tongue-in-cheek spoof of his earlier masterpiece, "The Maltese Falcon" and the noir genre in general.

A weekly newsletter of unexpected treasures: Join the Club
Advertisement