Director Jonathan Levine (full disclosure: Mr. Levine, when we met at the Sundance Film Festival in 2008, waxed highly effusive to me for minutes on end about what a fan he was of the print edition of "Premiere" magazine, which has tended to make me hold him in high esteem) has had to wait almost seven years for his 2007 debut to reach audiences, and he sounds pretty tired in the audio commentary for the movie. I found the film pretty good—a not uninteresting amalgam of
Advertisement
John Hughes, Tobe Hooper and (spoiler alert!) (sort of) William March. The Blu-ray looks okay but I suspect it could have been better—at several junctures this feels like a halfhearted master off a digital intermediary, with the summer-sun lens flares of Darren Genet's cinematography registering well but the night scenes coming in for some slightly distracting noise.—B-

This is a relatively stolid musical drama for "lightly likable" director George Sidney, and as such hardly a funfest of "Harvey Girls" proportion. And the sight of 40-year-old Tyrone Power making like "gotta dance!" Gene Kelly, only here it's piano-playing not dancing, in the opening sequence is cringeworthy. But there are several reasons this biopic is a cult fave and hence ripe for Blu-ray: One is breathtaking Cinemascope and the other is an awful lot more Manhattan location shooting than was common in Hollywood films of the time (this one's 1954). The Central Park montage, about a half hour in, is worth the price of the disc. This transfer is not from totally pristine materials but it looks great for the most part. First-billedKim Novak sports thinned-out eyebrows that mess with her signature look but is otherwise luscious. Certain buffs may speculate that the movie contains a plot twist (of sorts) that was later arguably lifted by Alfred Hitchcock in "Psycho." Or not. —B+

"In The Mouth of Madness" (Scream Factory)

Going through the Scream Factory Blu-ray reissues of John Carpenter's work I've been very pleasantly surprised how well once-dismissed or just underrated fare such as "Prince of Darkness" and "The Fog" played for me, so I had high hopes for this 1994 picture that Carpenter made from a screenplay by then-New Line executive
Advertisement
Michael De Luca (full disclosure: I once had a pretty spirited dinner out with De Luca and a few mutual pals years back). Sadly, no. Carpenter's visual acumen—which here comes across most strongly in the montages rather than the framings, which is unusual—can't disguise the threadbare production values, which fail to convey whatever verisimilitude De Luca's more-confused-than-it-knows concept requires so as to make any impact. The resultant film is rather shockingly dreary, despite the varying tricks Carpenter pulls out of his cinematic kit bag. The transfer is solid, though, as is the audio, and the commentary with Carpenter and cinematographer Gary B. Kibbe is replete with cogently communicated tech-wonk detail.—B- 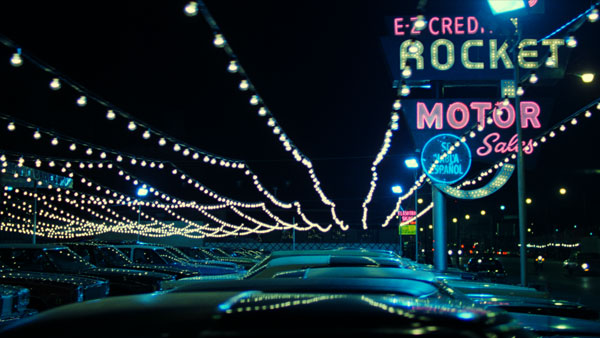 This high-def beauty yields a fascinating insight into Michael Mann's visual style: even when he had 35 mm film, he wanted digital. Check out the nightclub scene, before the start of Caan and Tuesday Weld's first "date". Look at the shots of the band, and the tavern window behind the band; Mann and cinematographer Donald Thorin use a diffusion filter (I presume) that renders the lights coming in from the street almost as giant rectangular pixels. It's a startling effect, one of many the Blu-ray of this groundbreaking 1981 movie reveals so vividly. The disc uses a 1995 commentary (recorded for the MGM laser disc!) with Mann and James Caan that's awkward and perfunctory a lot of the time, and replete with funny anecdotes some of the time; it's not up to the actual Criterion standard, but it's still a gem because Caan clearly hates the idea of the whole thing and at the end proclaims he'll never do another again. And as far as I can glean, he has not. —A

First things first: This is a super-strong visual presentation of this arguably archetypal British action picture from 1964. The whole thing is beautiful, frame by bloody frame. Second things second: it's still a damned squirmy sit for me. Audio commentator
Advertisement
Lem Dobbs sounds pretty irritated about charges of racism against the movie, and he's got a point—as a depiction of the tribal warriors and the situation they're in, the movie is extremely fair and scrupulous and doesn't truck in "noble savage" clichés. But the problems inherent in the very fact of the representation remain, if you know what I'm saying and I think you might. Of course, your mileage may vary in terms of Inhibition Of Entertainment Value. And to be fair, the battle sequences are still pretty much on this side of unbeatable. —A