There is a scene in Peter Weir’s prophetic 1998 satire, “The Truman Show,” that contains one of the greatest uses of music I’ve ever seen in a film. It occurs when the titular protagonist, Truman Burbank, begins to suspect that everything about the tranquil town in which he’s lived—and that he’s taken for granted for the entirety of his life—seems a little bit off. He begins to take a closer look at the people passing him on the sidewalk, searching for clues to a mysterious overarching system that may be conspiring to hold him hostage. Truman then steps into a revolving door, and continues to circle around and around, never entering the building before finally walking outside again. Not only is this a fitting visual metaphor for the structural routine of Truman’s daily existence that he has never questioned—until now—but it also reflects the very essence of the composition Weir chose to accompany these images: the anthem from Godfrey Reggio’s 1988 wordless essay, “Powaqqatsi,” scored by Philip Glass.

The term “powaqqatsi” means “life in transition,” and that is precisely what is occurring to Truman’s perspective in this scene, as it shifts from a sense of relative comfort to extreme paranoia. Glass’s celebrated use of “repeated motifs woven into ever-changing textures,” as defined by University of Chicago professor Berthold Hoeckner, mirrors the circular trajectory of Truman’s life, which has been trapped within a revolving door of ideological conformity. There’s also an industrial timbre to the music, originally meant to echo Reggio’s footage of the technological growth in developing nations, that here suggests the presence of a great machine designed to hit its precise marks, while blocking Truman’s path toward enlightenment. During an evening discussion that kicked off Glass’s three-day residency at the University of Chicago on Wednesday, February 17th, the renowned composer told me that he was initially hesitant in licensing his music to Weir, and he only did so once the director insisted upon their inclusion. Another Glass piece memorably used by Weir materializes at the very end in the form of a triumphant crescendo, as Truman embraces a new dawn of freedom beyond the horizon. How fitting that this music, written for the opening titles of Paul Schrader’s 1985 masterpiece, “Mishima: A Life in Four Chapters,” first accompanied a sunrise. 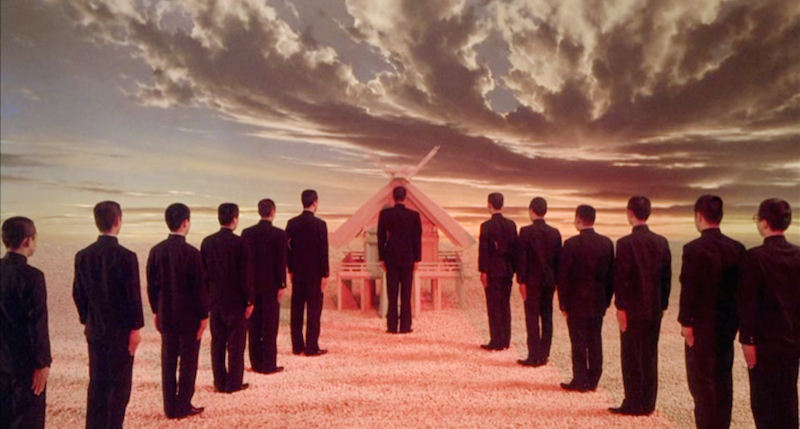 Prior to Glass’s Q&A, moderated by Hoeckner at the Reva and David Logan Center for the Arts, a beautiful print of “Mishima” was screened for a packed house. Winner of a Best Artistic Contribution prize at Cannes, the film is divided into four half-hour segments that examine the life of Japanese author Yukio Mishima, a man who strove to unify art and action, both in his work and his life. Schrader’s film does that in brilliant fashion by juxtaposing Mishima’s art with his actions, illuminating countless provocative parallels. Three narrative strands intertwine seamlessly—black-and-white flashbacks of Mishima’s life, a parallel narrative of Mishima’s last day that is grounded in realism, and three adaptations of Mishima novels shot in heightened color and containing abstract sets designed by Eiko Ishioka (who later collaborated with Glass on several operas). Each of the novels ends in an act of destruction that achieves an artistic transcendence, which eerily foreshadow Mishima’s “last public performance,” when he committed “seppuku” on November 25th, 1970. “He really wanted his writing to become his life and his life to becomes his writing,” Glass observed during the post-film discussion. “He was a man who was deeply poetic, but to the point where the conclusions of his intuitions led to his death.” Glass cited that Mishima’s most revealing book was his 1968 autobiographical essay, “Sun and Steel,” in which the author makes the case for his own suicide.

Returning to his alma mater as a UChicago Presidential Arts Fellow, Glass displayed the passion and creative verve of a man far younger than his 79 years. He said that he felt empowered by the confidence Schrader had in him, considering “Mishima” was Glass’s first film project that was anchored in a narrative. “We were in a Tokyo diner talking about the book, just me and him,” Glass recalled. “I asked, ‘How do you want the music to work?’ He took the script and pushed it over to me and said, ‘You tell me.’” Glass said that his personal method for tackling a particular project is similar to how people learn languages: through the process of immersion. As an example, he noted that in preparation for scoring the upcoming Broadway revival of “The Crucible,” he read everything that he could about the Salem Witch Trials. “Through immersion, the music finds its roots in a kind of quotidian way—a special case of everyday life,” Glass mused. The closest analogy to his work for “Mishima,” according to Glass himself, is his Oscar-nominated score for Stephen Daldry’s 2002 drama, “The Hours,” which juxtaposed the lives of women living in three different time periods. “I felt that the film was coming apart,” Glass said. “It was flying, like there was centrifugal motion in the filmmaking itself, which had to be complemented in some way. I thought of the music as rubber bands that pull the story together.” 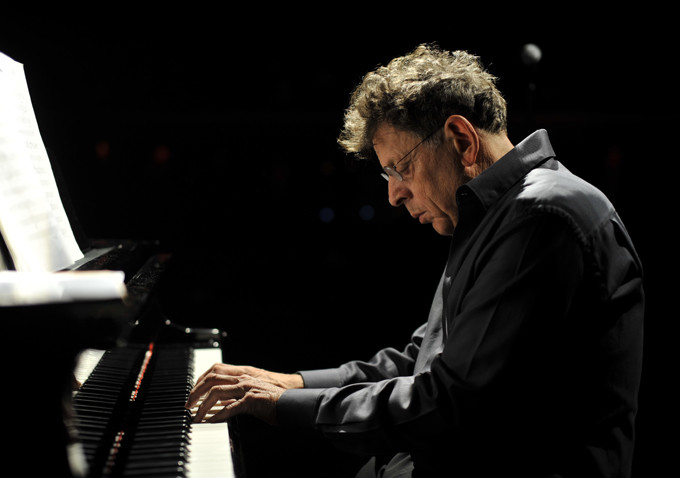 Having worked on dozens of films and operas throughout his carer, Glass insisted that there was a strong link between the two art forms in how they combine text, image, movement and music, which he likened to the four elements—earth, air, fire and water. He also stressed how Hollywood never seriously considers his belief that the emotional content of a film is determined by the music. Glass will often ask filmmakers to turn on their TV and play different music over the images. Suddenly, the images change their meaning, but the music remains the same, which in Glass’s mind, proves his point. When working on a film, Glass will only look at the images in a scene once, and he will never time them. Then he will attempt to write the music based on his imperfect memory of the image in a deliberate attempt to create a distance between the score and the footage, thus enabling the audience to find a connection between them, just as with the aforementioned scene in “The Truman Show.” Weir’s use of the “Powaqqatsi” anthem, as opposed to typical suspense music, is a tribute to the profound influence of Glass, and his desire to empower audiences in drawing their own conclusions, rather than being blatantly told what to feel at any given moment. “We don’t paint the mustache on the Mona Lisa,” Glass said. “In other words, you don’t want to get too close to the image.”

Toward the end of the Q&A, Glass recounted the story of an epiphany he recently had about his own music, which occurred during an onstage discussion with an Indian drummer. “I told him that I studied the structure of Indian music with Alla Rakha,” Glass said. “This was 1966, and I was working for Ravi Shankar, notating his music. I was also taking music lessons from Nadia Boulanger, and it was all getting mixed up together in some strange way. […] I ended up taking with me some very interesting ideas that I found in Ravi’s music. At that time, classical Indian music was not known at all in the west. I was given a piece of music to notate that was unlike anything I had heard before, and the only way I could do it was to erase all the bar lines. Once I did, I saw a stream of twos and threes. While this was going on, there were about eight or ten French musicians sitting there waiting for the music and I was sure I would get fired. I took another look at the music and saw that there was a common number that the beats added up to. Every 16 beats, it began again. This is what they call a ‘taal.’ I took the idea of the twos and threes and began to experiment with them [in my own work]. Thirty years later, I’m sitting in Geneva with this Indian drummer and it occurred to me that I’ve based a lot of my musical thinking on the idea of twos and threes. It’s a binary system like ones and zeroes. Indian music is basically a binary language, and until that moment, it had never occurred to me to see it that way. I borrowed [that language] from the great tradition of Indian music. I learned it from them, I didn’t invent it.”