Venus if you will, send a girl for me to thrill 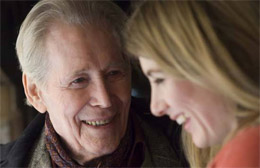 Sometimes an actor's face tells so much about his character that the movie doesn't have to waste its time describing the character's past to us. Roger Michell's "Venus" (2006) doesn't tell us in details how famous its hero was as an actor, but that's not a problem because he is played by Peter O'Toole, a living legend who gave us a bunch of memorable larger-than-life characters including Henry II of England, Eli Cross, the 14th Earl of Gurney, Alan Swann, and, above all, Lawrence of Arabia. When we look at him in the movie, we instantly remember how magnificent he was, and that aspect is naturally incorporated into his character.

O'Toole plays an aging actor named Maurice Russell, whose life and career are going through their final chapters when we meet him. He lives alone, but he has fellow actor friends with whom he spends time at the cafe nearby, and their usual routine is checking the obituary section to see who died recently among the actors of their generation - and how many columns he gets in the section. 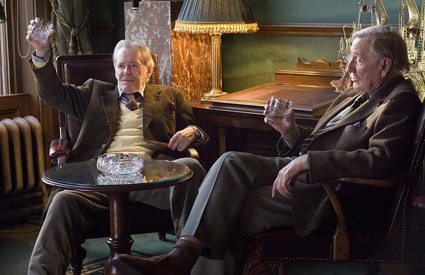 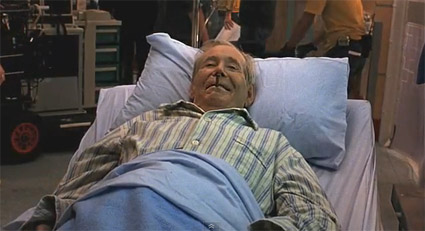 Although the prime period in his acting career has been over for many years and he's less famous than before, he isn't entirely forgotten in his profession (he can get a limousine to take him to a movie set if he makes a request through his agent). He can usually find the roles to play, though most of them are stereotype ones like dying old man or old mentor departing wisdom to young hero. While watching Maurice playing another dying character on a hospital bed as usual, I remembered that the last time I saw O'Toole in the movies was "Stardust" (2007), a fantasy film where he played an old but devious king lying on his deathbed.

One day, something Maurice has never expected comes into his quiet twilight life. His close friend Ian (Leslie Phillips) needs a caregiver because of his ill health, so his niece's daughter Jessie (Jodie Whittaker) comes to stay in his apartment to take care of him. Ian is quickly horrified to find what a terrible caregiver Jessie is. He's also upset by her brash attitude (she consumes all the drinks at his home much to Ian and his friends' dismay, for example). Ian desperately wants to get rid of her, but he cannot find a way because his niece does not want her daughter either. 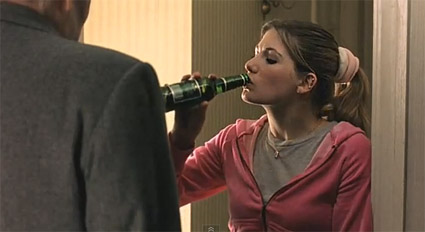 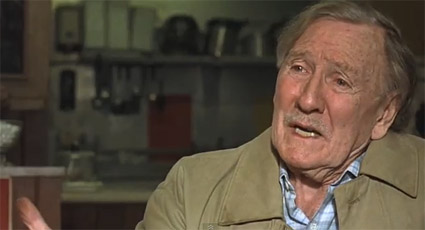 When Maurice meets Jessie for the first time, he becomes fascinated with this spunky young girl and then infatuated with her young nubile body. Because Ian asks him to handle the difficult situation with her, he spends some time with her, and he finds himself more attracted to her while discovering that his heart is not as old as he thought. Sex is out of question considering his current health condition (he is recently diagnosed to have prostate cancer and he is going to have a surgery), but, propelled by the little libido remaining inside him, he tries to be closer to her. 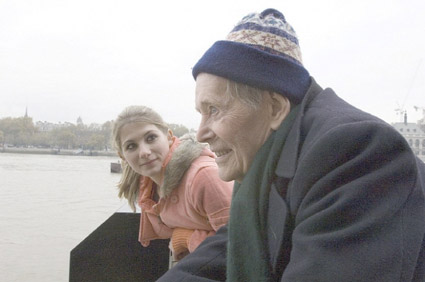 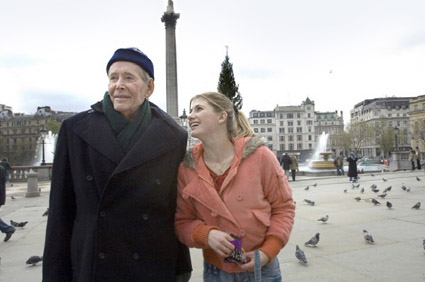 This may be not a pretty sight to some of you, but "Venus" deals with its subject in an honest and sensitive approach while never romanticizing or vulgarizing the unusual relationship in its story. The director Roger Michell and the screenplay writer Hanif Kureishi are no strangers to such a relationship; they previously worked together in "The Mother" (2003), which was about a lonely middle-aged woman getting involved with her daughter's lover.

The movie observes the nature of the relationship between Maurice and Jessie with no pretension about how it looks. It goes without saying that Maurice is a lecherous old man willing to smooch a young girl's naked body if he gets a chance, and he does not hide that fact from her, but there is also sincere admiration in his lust as classy as in Russ Meyer's films. When Maurice takes Jessie to the National Gallery and shows her Diego Velázquez's "The Toilet of Venus", he tells her a woman's body is the most beautiful thing to most men. She then asks him what is the most beautiful thing to a woman, and he gives her a truthful answer which seems to touch somewhere in her heart: her first child. 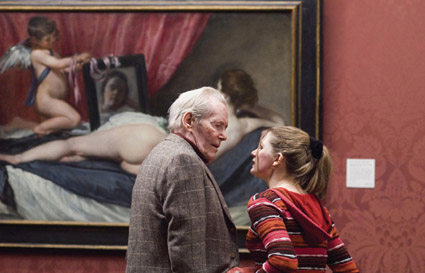 And Maurice is a fabulous dirty old man --fun to hang out with. Whether he quotes the lines from a Shakespeare play or utters profanities, O'Toole is always engaging to watch, while effortlessly conveying us acerbic wit and mischievous libido inside a fragile but tough old codger who won't make his exit quietly (can you expect anything less from Peter O'Toole?). It is hard for an old guy like Maurice to start another day while reminded of his few remaining days, but he keeps moving on while his sharp sense of humor is rarely suppressed, and he does not hesitate to take a chance with the relationship which may be the last romance in his life.

I must say that it is oddly amusing to watch O'Toole comfortably riding a limousine with Whittaker on the streets of London while a contemporary pop song is played on the soundtrack. Although he has been firmly fixed in the history of cinema since he appeared in "Lawrence of Arabia" and other classic films in the 20th century, this old legendary actor can be cool even in the 21th century. 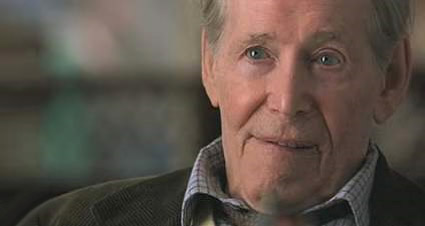 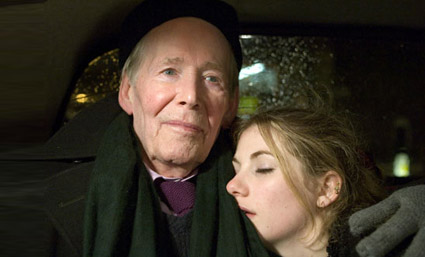 Because the story is advanced mainly from Maurice's viewpoint, Jessie is relatively a less-defined character in the story, but Jodie Whittaker--who made her debut with this film- is convincing as a precarious girl who won't allow her aging admirer to touch her easily. She was not born yesterday, and she knows her great-uncle's friend takes a "theoretical interest" in her body. She likes to be with him, but she sets her limits clearly to him; he can touch her neck or hands few times - but other parts, including her breasts, are out of bounds.

While their relationship is awkward at first, there is something gradually growing despite the huge gap between them. O'Toole and Whittaker have a touching scene when Jessie takes a bath at Maurice's home while he is waiting for her outside the bathroom as she demands. She confides a hurtful incident in her past to him, and he responds to her confession with a heartfelt recitation of one of Shakespeare's sonnets, and that considerably affects her feelings toward him. Although she lets him down a lot later through her wrong choices, Jessie comes to care about Maurice more than before, and she eventually follows the better side brought out by their relationship when he really needs her.

While it is warmed up a bit by their story, the movie seldom overlooks the fact that their winter romance is merely a small kindling about to be extinguished in front of the approaching night in Maurice's life. He and his friends jokingly talk about how many columns they will get in the obituary section when they are dead, but they are all aware of the grim fact of their lives; it won't be long before they will be mentioned in the section. 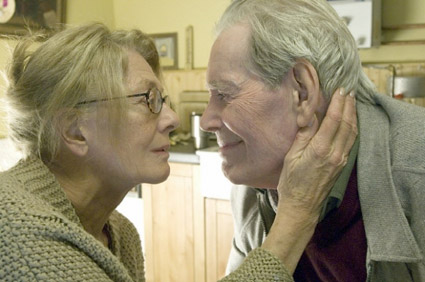 There is also the melancholic sense of loss hovering over them. The blank left by the people they knew in their life is getting bigger along the passage of time, and all they can do is wistfully reminiscing about the past which will never come back. Leslie Phillips, Richard Griffiths (he plays Maurice's other close friend), and Vanessa Redgrave (as Maurice's ex-wife) nicely support O'Toole as the people who have known Maurice for a long time while getting old along with him, and Phillips has a poignant moment with O'Toole when they look around the plaques of famous British actors at the Covent Garden's Actors' Church. They knew all these people including Boris Karloff, Robert Shaw, Richard Beckinsale (yes, he is Kate Beckinsale's father), and Laurence Harvey, but they are all gone now, and that makes Maurice and Ian more painfully aware of their fading life. With Dvorák's Slavonic Dance No. 2 played nearby by a practicing quartet, they promptly begin to dance, though they look like a dancing couple left alone in the ballroom while everyone else has already left. 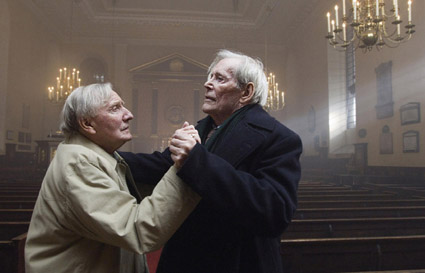 Although its third act feels strained due to the choppy progress of the plot, "Venus" remains effective as a mournful human drama which handles its tricky subject well with care, respect, and a little humor. Through its sensitive depiction of the unlikely relationship between its two main characters, it tells us that some romantic relationship can be formed by something other than physical love, and we come to see that both of them get a lot from each other in the end. Jesse gets a better view of herself while moving forward in her life, and Maurice is satisfied with where he arrives at with her, though that matters to him little after that point.

And the movie makes us look back at Peter O'Toole's illustrious career. When it was thought his career was going down around the 1970s due to his heavy drinking and medical complications, he bounced back with "The Stunt Man" (1980) and "My Favorite Year" (1982). After seven Oscar nominations without a win, he finally received an Honorary Oscar for his achievement in 2003, and we were glad to see him on the stage because we had thought he would have no chance of getting nominated again. But he said he was still in the game, and then he did surprise us with this film and got the 8th Oscar nomination in 2007 (he could have won, but, unfortunately, it was the year when Forest Whitaker literally swept the award season with his thunderous performance in "The Last King of Scotland" (2006.)

Now O'Toole ha recently announced his retirement, so "Venus" will probably be remembered as his last great performance while being a fitting tribute to the actor himself at the end of his career. While Maurice walks alone to an empty open-air theater, he gets immersed in bittersweet nostalgia filled with many voices from his works in the past. You may recognize that this sound montage actually includes O'Toole's performances in the past, and you may find this scene more powerful because of that reason. When young Maurice's photo, which is actually young O'Toole's photo, appears around the ending, a minor character says, "God, he was gorgeous." We can't agree with her more.