To travel and live without reasons

When I observed the lifestyle of Ryan Bingham in Jason Reitman's wonderful movie "Up in the Air" early in this year, Lawrence Kasdan's 1988 movie "The Accidental Tourist" came to my mind. Like Ryan, Macon Leary (William Hurt) knows a lot about traveling around by plane. He can tell you how to pack your bag as small as possible.

("In travel, as much as in your life, less is invariably more"). He can tell you how important it is to carry several travel-size packets of detergents. He can tell you why a gray suit is a full proof choice in any situations. He also can tell you where to have a real American meal in London.

He does not like traveling much. He'd rather stay at home than go outside, but that is exactly the reason why his publisher saw him as the ideal candidate for the business travel guide writer. For people who don't like traveling, Macon is the guy who can find useful advices while traveling around the cities. Several excerpts from his guidebook, "The Accidental Tourist," are humorously quoted in the movie, and you will find them quite useful for your next trip if you want to avoid strangers while feeling like being still at home. Following his advice, I used my Chicago travel guidebook with Blood Meridian as a standby in April. 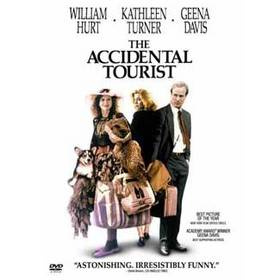 He has led his life in a way not so much different from his travel guide; he has human interactions as little as possible while maintaining his small world under his control. However, recently, his world is not the same as before. A year ago, the senseless tragedy had struck him and his wife Sarah (Kathleen Turner), and we clearly see the man helplessly paralyzed by the hurt and grief behind Hurt's detached face. When he saw the dead body of his son, he was completely devastated but chose not to open up his feelings. Now more withdrawn than ever, he has kept that on as if nothing much happened in this emotionless state.

Two changes come to him from the inside and the outside, respectively. The first one comes from his estranged wife. While hurt as much as him, she has been frustrated with her husband's impassivity and finally decides to move out of their house. Like anything happening around him, Macon accepts her decision with the laconic manner. With some few adjustments, he continues to live and work as scheduled before while trying to deal with his changed situation as well as the sense of the loss still haunting him.

That is just the prelude for the second change, a far bigger one. When Macon goes abroad for another business trip, he is in trouble in finding the place to take care of his son's dog. The dog seems to have been affected by the tragedy and the changed environment, and its usual kennel rejects it due to its aggressive behavior to strangers. Fortunately, he is helped by a dog trainer named Muriel Pritchett (Geena Davis), and she instantly comes to like him --- and instinctively senses that he really needs help. She approaches to him with casual conversations and her sunny personality. He is baffled by this quirky woman. He does not want her in his life, and curtly aborts her phone call later. 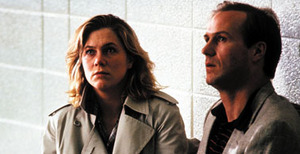 Soon he needs her for the other reason. After the unfortunate domestic accident and his injury caused by it, he temporarily lives with his siblings at the family house. When the split personality of the dog cannot be ignored more frequently than before, he seeks for Muriel's help. She comes closer to Macon while woking with the dog.

Under her influence, Macon slowly comes out of his shell under. In the warmest moment in the movie, he reluctantly--but eventually--opens up his heart to her even though he initially rejecting a dinner invitation in a written note. Muriel tenderly leads him to her bedroom with the soft pink light. They lie together on her bed, and he mutely accepts her ("I just want to sleep."). After that night, he begins to live with her and becomes a friend of her young petite, unhealthy son. The possibility of the new beginning with them is dawning upon him. However, the chance of going back to his past comes again by way of his wife. He finds himself at a fork where he really has to decide by himself.

The story belongs to a familiar territory, but "The Accidental Tourist" is enjoyable in its own way. While unfolding the plot in a somber tone with John Williams' monotonous but sensitive score, it digs small laughs as well as real emotions throughout the story. Macon's siblings lead more isolated life than him in the family house, and their eccentricity is one of major sources of the humor. For example, they do not mind answering the ringing phone because they don't feel the need due to a strange but somehow logical reason. Being nearly at a loss at the outside, they find the safety and the comfort only in their family house. They instead try to make a controlled environment in their house with the routines like ordering the groceries in the alphabetical order.

Their story is both a good contrast and a good comparison to Macon's. He wants to continue his lifestyle, and he has no problem with going back to his siblings. However, unlike them, he discovers that he cannot go on like that anymore. His problem will be still remained inside and will always hurt him even if he tries to ignore it. Through Muriel, he realizes what he really needs and can't deny or resist that. Once awakened, there is no going back.

Meanwhile, his sister Rose (Amy Wright) experiences her own change. After a coincidental encounter with Macon's publisher Julian (Bill Pullman) and the confirmation of their mutual feelings at Thanksgiving party (with the turkey cooked at 58C/140F!), she finally marries him to leave the house. However, her brothers (David Ogden Stires and Ed Bagley Jr. -- as colorful as Wright) become helpless without her in a few days, so she returns to the house and her marriage is strained. That prompts Macon to step in, something he has never done before. When Julian tells him about his and Rose's problem, he advises Julian how to handle the situation by stimulating Rose's tendency to get things organized: "Get things under control." After that turning point, intriguingly, each of them finds the way to happiness in the opposite directions.

After writing the screenplay for "The Empire Strikes Back" (1980) and "Raiders of the Lost Ark" (1981), Lawrence Kasdan started his directing career with "Body Heat" (1981), a stunning (and steaming) neo-noir masterpiece. Although his directing career is near a moratorium now, he made several good films before falling down to the mess like "Dreamcatcher" (2003), and "The Accidental Tourist" is one of them. Based on Anne Tyler's novel with the same name, he and co-writer Frank Galati (I saw Becket's "Endgame" under his direction at Steppenwolf Theater during my trip to Chicago in April) faithfully transfers the story, the characters, and the atmosphere to the screen while giving the final product its own life. The movie is about small things including gestures and mannerisms; we learn about the characters through these as well as well-delivered dialogues. 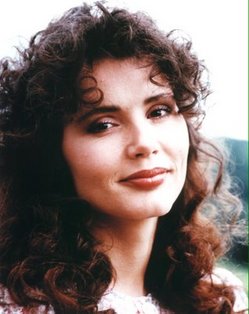 The cast give uniformly good, nuanced performances, and William Hurt's subdued performance is one of the best in his career. While playing an emotionally shut-out guy, he miraculously conveys the emotions hidden and stuck behind the thick barrier. This is the man who is tempted to sleep more in his comfort blanket while being irreversibly awaken to the sunshine from the outside. With masterfully modulated acting, Hurt illustrates Macon's emotional rehabilitation process in a subtle, convincing way, and that's the main reason why the expected ending fabulously works.

Kathleen Turner played together with Hurt as lusty lovers in "Body Heat." It's intriguing to see these two actors as another couple in far different light under the direction of the same director. Sarah leaves Macon because she wants feel something, but it's not easy for her to get out of the habits and she finds herself coming back for the reconciliation with husband. With the character a little softer than in the book, Turner makes Sarah more than the interrupter and the meaningful conversation in the hotel room in Paris has a quiet dramatic power. As sensible adults, both characters admit what cannot be done in their situation and console each other.

The movie was nominated for the Academy award in 1989 in four categories including Best Picture, and Geena Davis won an Oscar for her lively performance. You'll understand the reason when she appears for the first time on the screen. Muriel is the life force with lots of wackiness as well as heart, and Davis delivers the performance as good as Hurt's after the careful preparations. While cheery and optimistic with her unconventional appearance, Muriel is also a working-class realist. She wants Macon as her man and the father figure for her son, but that does not mean she tolerates Macon's indecisiveness on their relationship. However, even when she is probably disappointed by his decision at one point, she never gives him up. She actively pursues Macon because she wants him and knows he needs her. She makes a daring move despite uncertain about the outcome and that ultimately pushes Macon to the crucial point. 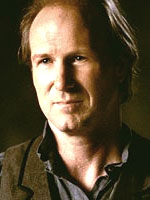 While it is slow, muted, depressing, sad, the movie is also funny, humane, and optimistic throughout the story. The characters look weird at first, but they and their story represent the interesting side of the human nature. You'll find bits of yourself in them; maybe you will be fond of them. We're also sometimes afraid of the uncertainty outside and try to stick to our way to get the false sense of security. But life does not work as if it were business trip. Good or bad, things just happen and it's good for us to go outside and connect with people rather than to hide inside the cocoon. When I went around the streets of Chicago, I usually stuck to my guidebook, but many of memorable moments came from the incidents and the improvisation with people there. Embarrassing or not, I find later that they're valuable materials for the conversations.

I came across "The Accidental Tourist" by accident on cable TV in one fuzzy Sunday morning 8 years ago, and I find myself still amused by this small gem. Its first look is probably as boring as the depression ward to you, but you will find this gray movie quite funny, and willingly follow Macon's journey. Yes, we all know there is the sunshine is waiting for him at the end of the drab tunnel, but, in this case, the tunnel itself is as joyful as the sunshine.