In Part 1 of our four-part series about images of Islam in Western Cinema, we saw that Muslims are often depicted as part of an exotic, dangerous world. Muslims were patriarchs with short tempers seeking to kill people (including their own) while trying to subjugate and seduce women. In the latter part of the century, film began to portray Muslims as organized masses of savages led by secretive leaders, seeking to resolve disputes with swords and rifles, needing to be civilized by Westerners. In 1962's “Lawrence of Arabia,” the title character pleads, “So long as the Arabs fight tribe against tribe, so long will they be a little people, a silly people—greedy, barbarous, and cruel, as you are.” The American Film Institute, by the way, lists this quote as one of the great quotes in the history of cinema.

Still, some elements were the subject of fascination: Omar Sharif found popularity in “Lawrence of Arabia” and became a leading man. For much of my youth, when finding out my first name, curious older women asked me, “Omar, like Omar Sharif?” He was seen as an exotic lover like Valentino in 1921's “The Sheik.”

The 1960s and 1970s witnessed the appearance of two related but distinct depictions of Muslims—Black Muslim and Middle Eastern Muslims—and both were militant. In addition to the normal problem of stereotyping, the first problem is that these negative images became the default for their perspective groups. The second problem is that American domestic or foreign policy were made exempt in feeding into the formation of these groups. All along, Muslims get associated with violence.

The 1950s saw the rise of the Nation of Islam, led by Elijah Muhammad, whose most prominent disciple was Malcolm X. American media developed an archetype of the Black Muslim: the well-dressed, hyper-confident militant. The members of the Nation of Islam saw themselves, however, as reclaiming a history that was erased in the centuries of the Trans-Atlantic Slave Trade, as they formed a non-violent, non-political movement focused on self-improvement with “Do for Self” as a motto. Instead, they were characterized as a hate group, through such works as Mike Wallace’s 1959 documentary, “The Hate that Hate Produced.” It was not until years later that Cassius Clay Jr. became the heavyweight champion of the world, and followed it by announcing his conversion into the Nation of Islam. And it was not until months after that that Malcolm X broke off from the Nation after finding out about Elijah Muhammad’s sexual improprieties, and was assassinated. Yet, already the Black Muslim movement was categorized as a group of militants.

With the rise of such non-Muslim movements as the Black Panthers, the “Angry Black Militant” became a common archetype. Black Muslim characters, often depicted as gang members in prisons, would make appearances in films like 1988's “Red Heat” featuring Arnold Schwarzenegger. Years later in 2001's “Ali,” Michael Mann gave us a very sensitive portrayal of Muhammad Ali, a short complicated portrayal of Malcolm X, but a one-dimensional portrayal of Ali’s Nation of Islam managers.

Across the globe, things were similar. In 1966, the documentary-style Italian/Algerian production “The Battle of Algiers” chronicled the Algerian guerrilla insurgency against the French occupiers and was immediately banned. In the decades since then, it has been celebrated and studied. 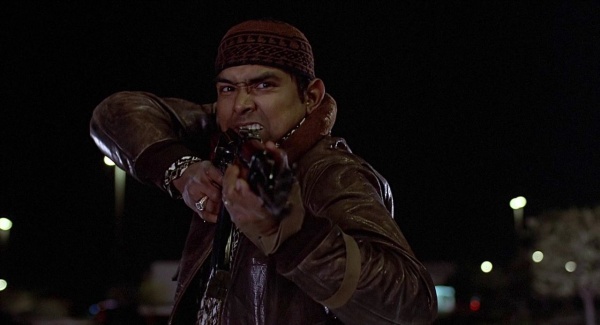 In the 1970s, with the killing of Israeli athletes in Munich, the Oil Embargo by OPEC, and the Iranian Revolution, we saw a wave of cinema presenting Arabs not only as savages, but now extravagant savages, with uncountable wealth. Though the Palestinian nationalists at this time were not all Muslim (the prominent were Christians or secular), the targets of such films were Arabs, Muslims and sometimes Persians. Another of the great films of American Cinema, 1979's “The Black Stallion” (and its lesser sequel in 1983) featured Arabs in robes and turbans abusing the famed horse. The plot of 1985's “Back to the Future” (pictured above) launched with armed, shouting Libyans speaking in some foul guttural language trying to steal plutonium, shooting Christopher Lloyd's Doc Brown. Jack Shaheen pointed out in the 2006 documentary “Reel Bad Arabs” that Cannon (Golan-Globus) Films was most prolific in producing movies with such characters, including the “Delta Force” films that made Chuck Norris an action star. Continuing this theme decades later, Michael Moore’s scathing “Fahrenheit 9/11” from 2004 was an indictment of the Kingdom of Saudi Arabia as much as it was an opera of sorts about the excesses of the House of Bush.

The end of the 20th Century was another burst of world changing events. The USSR fell and former Soviet states sought independence. After a decade-long war with Iran, sparked by his invasion of their oil fields, Saddam Hussein invaded Kuwait, sparking the United States to claim to defend liberty and democracy with Operation Desert Storm. Salman Rushdie lived in hiding because of the death threats and fatwas related to The Satanic Verses. Bosnian Muslims and Croats experienced “ethnic cleansing.” The World Trade Center was bombed. With the First Intifada, the Palestinians made aggressive moves toward self-determination, leading to the Oslo Accords. Ethnic cleansing of Muslims in Kosovo, Albania. And, Samuel Huntington published “Clash of Civilizations” in the journal Foreign Affairs, asserting that now that the Cold War has ended, our next phase in history will be civilizational battles with the rest of the world, starting with Islam and China. American cinema reflected this change, expanding on its common depiction of the savage and militant Muslim, one hell-bent on finding salvation through dead Americans.

This image was solidified with 9/11, and has been ossified since then with such groups as ISIS. The model is consistent with prior cinema: a reclusive leader (Osama bin Laden, for example) leads a legion of Muslim fighters ready to die for salvation, killing as many civilians as they can in the process. Even the sexual misogynist archetype gets reinforced with, for example, emphasis on the Taliban’s subjugation of women, Boko Haram’s kidnapping of girls for prostitution and Osama bin Laden’s pornography collection. The point here is that the only time we care about Afghan women or Nigerian women, for example, is when Muslim militants are in power. While Muslims were committing these crimes, we saw and see them as driven by theology, as opposed to freedom fighters against Western occupation or as radicals capitalizing on the violence of American foreign policy. Confirming this point, Sylvester Stallone dedicated 1988's “Rambo III” to the Afghan Mujahideen, freedom fighters against the Soviets. This is the same population of people we today regard as terrorists, the Taliban.

The archetypes that form in Western cinema include the following:

The Muslim Zombie Apocalypse: Our vision of the Muslim majority populations of the world is that they are wastelands. These are films in which valiant Americans in foreign nations keep finding Muslims ready to trounce upon them (if not kill them). Included are Afghan zombies in 2013's “Lone Survivor,” Iranian zombies in "Argo" (2012), Iraqi zombies in many films, including "The Hurt Locker" (2008) and "American Sniper" (2014) and Somali Zombies in “Black Hawk Down.” They are not all armed, but everywhere we look, they appear.

The Chivalrous Warrior: Some films, however, do part from these negative portrayals, including 1999's "The 13th Warrior" and 2005's “Kingdom of Heaven." Even then, both films featured Muslims in battle. Even when the Muslims are smart, sympathetic, thinkers and poets, the context is violence.

Some continued the old exotic themes discussed in Part 1 of our series. These include those of the growing genre of Christian Evangelical films like “God’s Not Dead,” more fantasy films like “The Adventures of Baron Munchausen,” and failed comedies, including “Ishtar” and “Jewel of the Nile.” 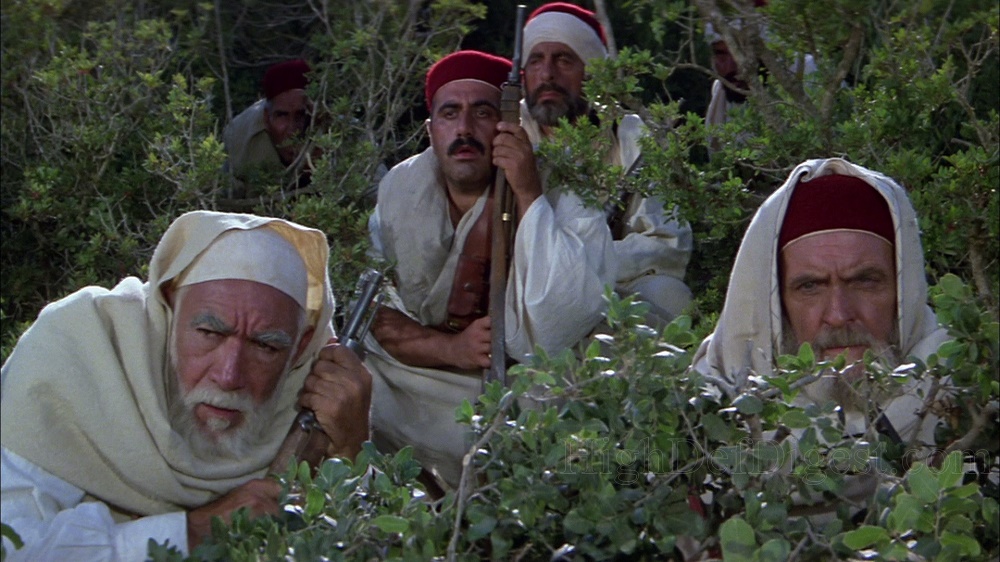 Nevertheless, there were quite a few films that sought to show alternative perspectives and complexity in the narrative of Muslim violence. 1980's “Lion of the Desert” (pictured above) told the story of Omar Mukhtar, fighting off the Italian occupiers. “Syriana” (2005) and “Babel” (2006) showed a very complicated world, where every corner of the globe was connected. 2008's “Traitor” showed Don Cheadle as a closet Muslim and closet CIA agent seeking to stop Muslim terrorists. 2015's “He Named Me Malala” was a documentary about the most interesting young Muslim Nobel Laureate, who was shot by Muslim militants. “Three Kings” (1999) “Charlie Wilson’s War" (2007) and “The Kingdom” (2007) sought to humanize many of the Muslims caught in these geopolitical conflicts, while also presenting Americans as sometimes exploitative and vengeful, though still heroic. “The Reluctant Fundamentalist” (2012) inverted the situation, with an American journalist being short tempered, while the Muslim protagonist is multidimensional and sympathetic. And, the most important part of the very dark 2010 comedy “Four Lions” is that the conservative Muslims in the film were non-violent, while the terrorists, in addition to being bumbling idiots, were theologically ignorant.

In all of these films, however, Western cinema presents the default of Islam and Muslims as violent. The sympathetic films may try to either humanize Muslims or explain the violence, but violence is a default or the main problem, as driven through militancy. American domestic or foreign policy is almost always given a free pass. Today, we are still unable to speak about 9/11 or ISIS in conjunction with American foreign policy: we keep sharing among ourselves the narrative that these killers are theologians acting on belief, reflecting that in movies.

Even though Western cinema would give us the impression that violence is the norm among Muslims, it is the anomaly.