Islam in Western Cinema, Part 1 - The Exotic Muslim, from the Exotic Land

The five civilizations that formed the foundations of what became the modern West are Greece, Rome, Judaism, Christianity and Islam. We often think of the four, but not the fifth.

So many of the ideas and artistic forms that we today associate with Europe find roots among Muslims, including algebra, astronomy, medicine, philosophy and stained glass. In some cases, these were original works; in other cases, they were translations or expansions on prior works, especially those of the Greeks. The most influential of all Christian thinkers after St. Augustine, St. Thomas Aquinas, speaks of two inspirations in “The Philosopher” and “The Commentator” in his Summa Theologica. “The Philosopher” is Aristotle; “The Commentator” is the Islamic religious philosopher Averroes (Ibn Rushd) of Spain. A prominent Jewish scholar named Moses Maimonides, known in Arabic as Musa ibn Maymun, was also from Spain and received tutelage in Muslim seminaries, though much of his work was in Egypt and North Africa. Cervantes writes of Don Quixote being taken from (probably imaginary) Arabic source material. Shakespeare’s Othello is a Muslim (Moor). Dante’s The Inferno condemns Muslims and mosques to Hell, though he does not mention he takes inspiration from a famous Muslim scholar, Ibn Arabi.

Past American thinkers cite the Persian poets Omar Khayyam, Saadi and Rumi, and the latter is—according to the Christian Science Monitor—the most read poet in America today. Muslims have fought on the American side in every war in our history, including those wars where the opposite side was Muslim. When US Congressman Keith Ellison took his Oath of Office, he used Thomas Jefferson’s copy of Islam’s sacred text, the Qur’an. Today, every US Marine has a sword modeled after a weapon of the Muslim Mamluk Empire, commemorating a gift given by the Muslim Ottoman Empire to a Marine Lieutenant. In our current political season, we have discovered Muslims who have died as American war heroes.

Islam has been a beneficial presence throughout the American narrative. The two tallest buildings in Chicago, the Willis Tower and John Hancock Center, were designed by Muslim Structural Engineer Fazlur Khan. Steve Jobs and President Barack Obama both have Muslim lineage. Kareem Abdul-Jabbar, now a prominent social critic, is the NBA’s all-time leading scorer. Hakeem Olajuwon led the Houston Rockets to two NBA finals. And, we recently laid to rest the man unanimously considered to be the Greatest, Muhammad Ali. A major percentage of the American workforce, from cab drivers to engineers to physicians, are Muslim.

And yet, because of geopolitical events of the past few decades related to Israel-Palestine, Iran, Iraq and Afghanistan, and attacks on our soil from the first World Trade Center bombing to 9/11 to Boston to the shootings at San Bernardino, Chattanooga and Orlando, we regard Islam as something new and hostile. There are definitely Muslims at war with America and there are definitely Americans at war with Islam and Muslims, yet these have been the anomalies, not the norm.

In this series, we will explore Islam in Western cinema. Over the past century of American film in particular, we have had four forms of Islam: the exotic foreigner, the militant threat, the pious believer and the American Muslim. Each of them has a place in today’s conversation of Islam.

Part 1: The Exotic Muslim, from the Exotic Land

An early scene in the Ultimate Edition of “Batman v Superman: Dawn of Justice” sums up the three most common stereotypes we have toward Islam. Lois Lane sits before the Nairobian General Amajagh. She asks him if he is a terrorist, and he complains that a woman is interviewing him. It is the image of the sequestered cult leader, highlighted with violence and misogyny.

The first part of the 20th century featured an American fascination with all things Eastern, as though that land was mysterious and hidden. Sir Richard Francis Burton wrote of his journeys disguised as a Muslim in the late 1800s, performing the pilgrimage to Mecca. He also translated the bawdy pulp fantasy The Arabian Nights. Likewise, in the first few decades of cinema, Islam was an exotic novelty. We associated those lands with crowded spice markets, unethical merchants, tribes of bandits racing through desert dust storms, curved architecture, mystical cultures, magical creatures, hyper-sexuality and brutal “off-with-their-heads” violence.

The first set of films to reinforce these stereotypes were inspired by The Arabian Nights. The second set added a dimension of civilized Westerners among violent Muslims. The third set depicted Americans as the default, with Muslims aiding or obstructing them. 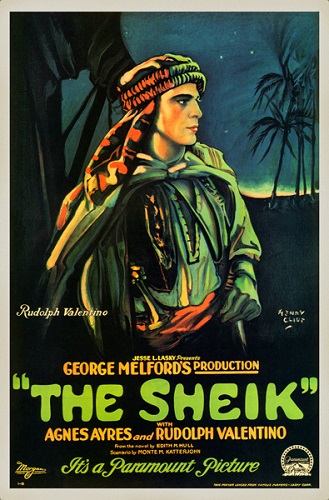 In 1921, Rudolph Valentino headlined posters as the silent movie star of “The Sheik.” He plays Ahmed Ben Hassan, a desert leader who comes upon an independent British woman, Diana (Agnes Ayres). Many Arabs seek to seduce her, though he is the most civil, limiting himself to imprisoning her. He reveals that he is actually British and Spanish, but not Arab. She falls in love with him. In 1926, Valentino reprised this role while also playing “The Son of the Sheik.” Here, the son falls in love with a woman, Yasmin (Vilma Banky), whom he rapes, and eventually goes to her town to kill everyone. Bernardo Bertolucci’s “The Sheltering Sky” (1990), a co-production between the UK and Italy, also takes from this narrative of a white woman leaving urban life to find seduction by silent, turbaned North Africans.

In 1924, Raoul Walsh directed the silent “The Thief of Bagdad” about two men—one a street dweller and the other a nobleman—competing for the love of a vulnerable princess. Michael Powell and a few other British directors remade “The Thief of Bagdad” in 1940 in full sound and color, employing state-of-the-art special effects to compete with such contemporary films as “The Wizard of Oz.” The film was remade again as “The Thief of Baghdad” in 1961 by Italy and France. In these movies, men employ spells that summon Genies (Jinns) to grant their wishes, while enchanting cloistered women hide away in harems. Brutal, imbecilic kings with numerous wives play with toys while executing dissidents. Sword fights determine victors. Disney took from the 1940 film for “Aladdin” (1992), in which the main character seeks to seduce the princess Jasmine, before the evil Jafar can get to her.

On a side note, in 1942, one of the greatest of all American films took place in Morocco, “Casablanca.” It has the curved architecture we find in such films, but most of the film is about Europeans and Americans. It is also about two separate men trying to seduce the same woman.

In the second half of the century, we saw an added dimension to this iteration of Islam in British and American cinema. Westerners were portrayed as civilized and civilizers, while the Muslims as backwards, uncouth and savage.

In 1962, we visited the original White Savior in “Lawrence of Arabia,” one of the greatest films of all cinema, which must be viewed on the largest possible screen. But, the Arabs in this British movie are ignorant tribesmen driven by violence and nonsensical fatalist theology, save for a few like Prince Feisal, who lives in a tent in the desert and is remarkably charismatic and refined, perhaps because he is Western-educated. T. E. Lawrence is the man who takes it upon himself to civilize them. There are, by the way, no women in this movie. 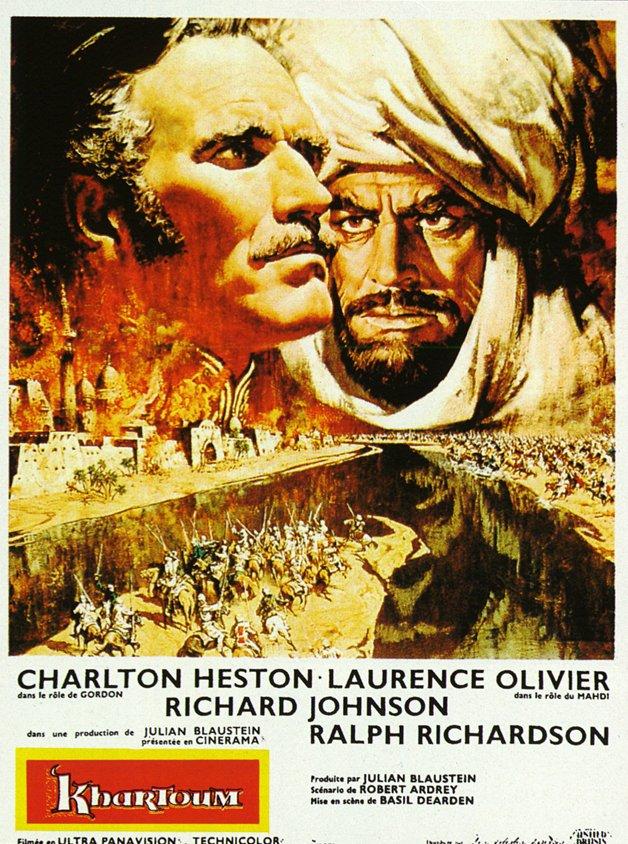 In the 1966 British film “Khartoum,” British agent Charles Gordon (Charlton Heston) meets a Sudanese leader who lives in a tent in the desert, claiming to be the Mahdi of Islamic End Times prophecies. He is a brutal leader with an army of thousands of militant believers, ready to take over a town, killing tens of thousands in the process, while beheading Gordon, putting his head on a stick.

In 1977, the ultimate British film character, James Bond, traveled through an Egypt full of shoddy construction and tents full of beautiful women in “The Spy who Loved Me.”

Almost two decades after “Lawrence of Arabia,” cinema met another of the greatest of all time in Steven Spielberg’s “Raiders of the Lost Ark." The American film takes place in an Egypt that has many markets, sandy beige buildings, few cars, many guns & swords and jolly Arab sidekicks. Not only are the Americans more civilized and organized than the Muslims, but so too are the Nazis. To be fair, I should mention that the film reduces Peruvians to the same type of swarthy savagery it does to the Egyptians.

By the end of the century, we turned full circle in terms of gender. Imagine a modern sequel to a movie like “The Sheik,” where the Western woman seeks to escape from the tyranny of her Muslim husband. In 1991, Sally Field's character in “Not Without My Daughter” attempts to escape from Iran with her daughter from a once-charming husband who—as he grew religious—grew monstrous.

In sum, consider the archetypes we find in so many of these films. The world of Islam, according to these movies, is a world of mysterious men seeking to bed women; it is a world of savages led by secretive leaders. Through the latter part of the century, it becomes an ancient world trailing behind our own in civility, organization and technology.