My fondest childhood memories are linked to Disney despite my father trying to cure my wandering spirit by filming me "lost" in a Disney crowd. I still wander (ask my husband) and I still love Disney, particularly the animated feature films. On Friday, the first day of D23 I wandered away from my husband and sat for a few hours listening to the descriptions of enchanting future Disney animation features.

D23 Expo is the official Disney fan club and named for the year that Walt Disney left Kansas City for Hollywood where he founded Disney Studios. Club membership has three levels: gold, silver and free. All members have the opportunity to buy exclusive merchandise.

Both San Diego Comic-Con and D23 Expo are entrenched with the message of consumerism. San Diego Comic-Con is an annual event, but D23 Expo is a biennial happening. This year is the third ever D23 Expo. While you do have to buy tickets (which sold out for Friday and Saturday), you don't always have to buy the exclusive items. There are a lot of freebies, but if you're in line for the D23 Arena events, you might miss out on them. The line reportedly started unofficially about 4am and this year's D23 Expo is bigger, due to the entry of Marvel into the Disney family.

This year, my husband wasn't credentialed like last time, so while I was at the 10am to 12:30pm "Art and Imagination: Animation at The Walt Disney Studios" presentation, he walked the floor and stood in different lines. There was a will-call line to pick up your badge and then a line to get into the expo before you could even get into a line for anything else. SDCC is more streamlined in this respect.

The lines for the animation presentation were closed when he finally got through the second line at 11am although the actual presentation went to 1:30pm and the stadium wasn't full—four sections of chairs on the balcony weren't used. At SDCC, this presentation might have been broken up into at least two different panels and given us bathroom breaks. These are minor quibbles because Disney knows how to entertain.

Saying that he thought Walt Disney would be extremely proud of the continued Disney animation tradition, he commented that one of the surprises of the recent "Monsters University" movie was the popularity of the slug (voiced by Bill Hader). If you left before the credits, then you might have missed the ending of the slug's story, but Lasseter introduced the clip for fans to appreciate.

Hader, who also is the voice of Guy Gagné in the recently released "Turbo," will be one of the voices of the dinosaur family in the Disney-Pixar "The Good Dinosaur" along with Lucas Neff as Arlo, the central character figure. Other voices will be provided by Judy Freer, Neil Patrick Harris, John Lithgow and Frances McDormand. "The Good Dinosaur" considers what if that asteroid hadn't hit earth and the dinosaurs have evolved into a farming society. The feature is scheduled for May 30, 2014. Arlo, an apatosaurus, befriends a young orphaned boy and they go on a quest together into unexplored territories. Neff, Greer and Hader appeared on stage to briefly talk about the movie.

The D23 Expo audience were treated to the 6-minute short "Party Central" which takes place at Monsters University while Mike and Sulley are at Oozma Kappa and throwing an epic party with a few surprises. The short will be shown before "The Good Dinosaur" at movie theaters.

If you are a fan of "Planes," you might be excited that Disneytoon Studios will be bringing back Dane Cook as Dusty for "Planes: Fire & Rescue." Cook appeared on stage to talk about this new movie which finds Dusty with engine damage and unable to race any more. He decides to join a team of fire fighters, but he's out of place and must learn how to work as part of a team. This new animated feature comes out on July 18, 2014.

Also premiering in the fall is the Walt Disney Animation Studios' "Frozen" which takes a classic Hans Christian Andersen tale, "The Snow Queen," and changes it to be more family friendly. The story is about two sisters Anna (Kristen Bell) and Elsa (Idina Menzel). Elsa is born with a power to create ice and snow and lives a life ruled by the fear that her powers will cause harm. The other sister is more ordinary, but her courage will help free their kingdom of Arendelle which is trapped in an eternal winter. Anna is aided by the handsome Kristoff (Jonathan Groff), his reindeer Sven and a snowman they meet named Olaf (Josh Gad) who longs for summer. 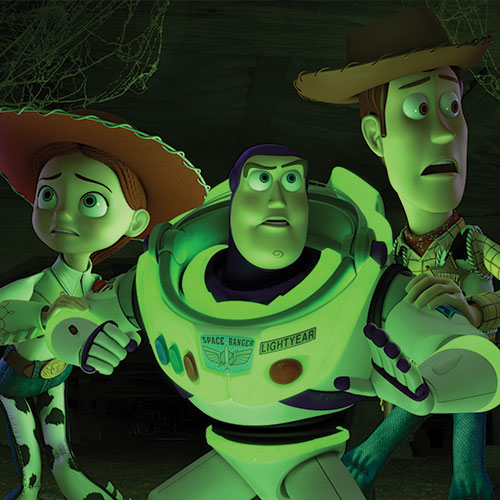 Fans of "Toy Story" and lovers of Halloween can look forward to the Oct. 16, 2013 premiere of "Toy Story OF TERROR!" The D23 Expo audience got to see the first 10 minutes of the 30-minute special which tells what happens when the Toy Story gang and their new kid end up at a roadside motel.

Olaf and Sven were already introduced to movie-going audiences as a teaser trailer that showed before "Monsters University."

A special short "Get a Horse!" which will be shown in theaters in front of "Frozen," was given its U.S. premiere for the D23 Expo audience. This features Walt Disney's own voice as Mickey Mouse and mixes black-and-white hand-drawn animations with color 3D animation in an inventive and fun way that will make you love 3D again.

For 2014, Disneytoon Studios will mix pirates with fairies for "The Pirate Fairy." Christina Hendricks will voice Zarina, a dust-keeper fairy who steels the blue pixie dust and joins forces with the pirates of Skull Rock. Tinker Bell must find Zarina to return the pixie dust to save Pixie Hollow. One of those pirates is James (Tom Hiddleston), the future Captain Hook before he gets his hook.

Hendricks and Hiddleston appeared on stage. Hiddleston made the mistake of confessing that "Baloo was my spiritual godfather" and the audience pressured him to sing a few bars of "Bare Necessities" from "The Jungle Book." "The Pirate Fairy" will premiere in the spring of 2014.

More exciting for me and my martial arts loving husband is the Walt Disney Animation Studios' "Big Hero Six" which takes place in San Fransokyo (a cross of San Francisco and Tokyo). A robotics genius named Hiro Hamada gets a crew of reluctant first-time crime fighters to save the city. Comic book fans will recognize this as a Marvel title. This CG-animated feature will be in 3D and hit theaters on Nov. 7, 2014.

Further into the future are two features: Another Disney fairy adventure "Legend of the NeverBeast" and an adventure into the mind of a teenager in "Inside Out." Both movies are slated for a 2015 release. Disneytoon Studios "Legend" has Tink and her friend trying to save the NeverBeast because you can't judge a beast by its fangs.

When a young girl moves to San Francisco, she is unhappy in the Disney-Pixar "Inside Out." We see her emotions Anger (Lewis Black), Disgust (Mindy Kaling), Fear (Bill Hader), Joy (Amy Poehler) and Sadness (Phyllis Smith) in her emotional headquarters. What happens when Joy and Sadness leave and Anger, Disgust and Fear are left in charge? Expect an appearance of the train of thought. Smith and Hader were on hand to demonstrate why Smith got to play Sadness.

Also in 2015, Disney-Pixar will finally be producing a sequel to the 2003 "Finding Nemo," which will be "Finding Dory." Dory, the forgetful tang fish, goes in search of her family. The voice cast will include Ellen DeGeneres as Dory, Albert Brooks as Marlin, Ty Burrell as Bailey, Diane Keaton as Dory's mom and Eugene Levy as Dory's dad.

As a comic side gag, Hader brought up the subject of the Pixar's lucky charm, begging for another role in a Pixar film, and fans were delighted when Pixar's real lucky charm John Ratzenberger came on stage with Disneyland's marching band. Confetti cut in the shape of hearts, moons, stars and clover flew into the audience as part of the celebration. 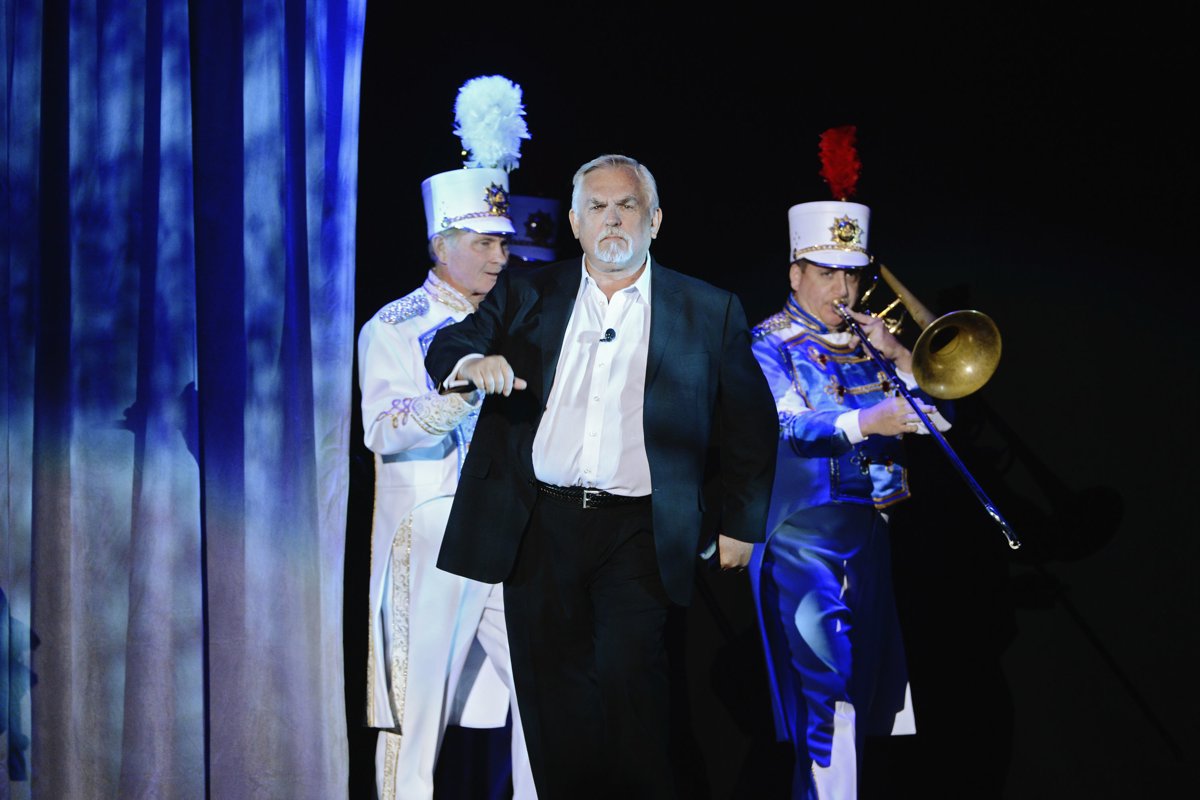 For 2016, Walt Disney Animation Studios has a comedy adventure feature with the working title of "Zootopia." Director Byron Howard ("Tangled") and writer Jared Bush were on stage to talk about this feature which imagines what a world would be like if animals built cities to suit themselves. Yes, this is one of those animated features where the animals not only talk, they dress in clothes. In a city divided into neighborhoods according to habitats such as a polar bear friendly Tundratown or a camel hotspot Sahara Square, a rabbit and a fox are forced to team up and solve a crime that the fox has been framed for.

After looking into the future, Disney also remembered the past, honoring Burny Mattinson who has been with Walt Disney Animation Studios for 60 years. He began at 18 in 1953 with no formal art training, but became an in-betweener on "Lady and the Tramp" six months later. He was the senior story artist on the 2011 "Winnie the Pooh." The list of animated features he's worked in between are like pages from everyone's childhood scrapbook of memories. Mattison shared how he came to the studio without an appointment and got hired after showing his work to the security guard at the gate. It pays to be optimistic and polite and friendly to everyone.

As a special surprise, Idina Menzel ended the animation presentation as she belted out a new song, "Let It Go" sung by her character Elsa from the score of "Frozen." Scenes of her character were shown on the screen and more confetti fell like snow on the crowd. Exhilaration, hunger and fatigue mixed as I raced through the crowd to the nearest bathroom and then to find my husband before we attended the costume contest.