Within Polish post-war cinema, Andrzej Wajda (1926-2016) was a figure both towering and defining. His recent death at the age of 90 deprived world cinema of yet another of its masters in a year already cruel in that aspect. With a career spanning over 60 years and 40 feature films (as well as many other projects, both in film and theatre), there’s more than enough Wajda out there to keep being discovered and rediscovered. Below is a personal list of my favorites, listed alphabetically. Unless otherwise indicated, these movies are currently available on English-subtitled DVD, Blu-ray and/or through streaming services. 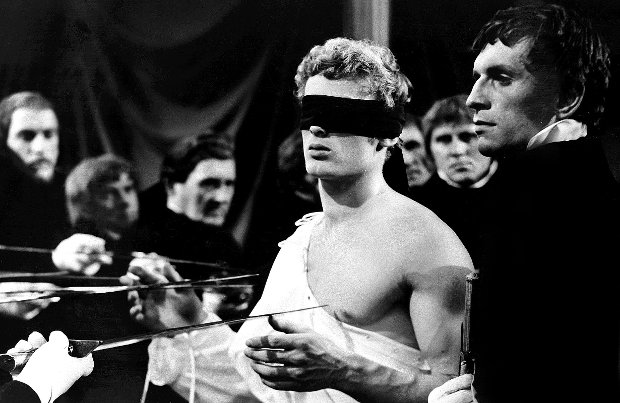 This four-hour historical epic, shot in gorgeous black-and-white CinemaScope, premiered in Main Competition at the 1966 Cannes Film Festival and remains unreleased on DVD in its recently restored version. Based on a sprawling novel by Stefan Żeromski and set in early 19th-century Poland of the Napoleonic period, the film portrays the then-partitioned country as simultaneously longing for independence and incapable of winning it. The most shattering sequence comes when Polish soldiers in Napoleon’s service partake in slaying black rebels on Santo Domingo—one small enslaved nation destroying another in service of big geopolitical players. The last shot of the film, portraying Buonaparte’s retreat from Moscow amidst endless fields of snow, is the finest anthitesis of Abel Gance’s heroic “Napoleon” to ever reach the screen. 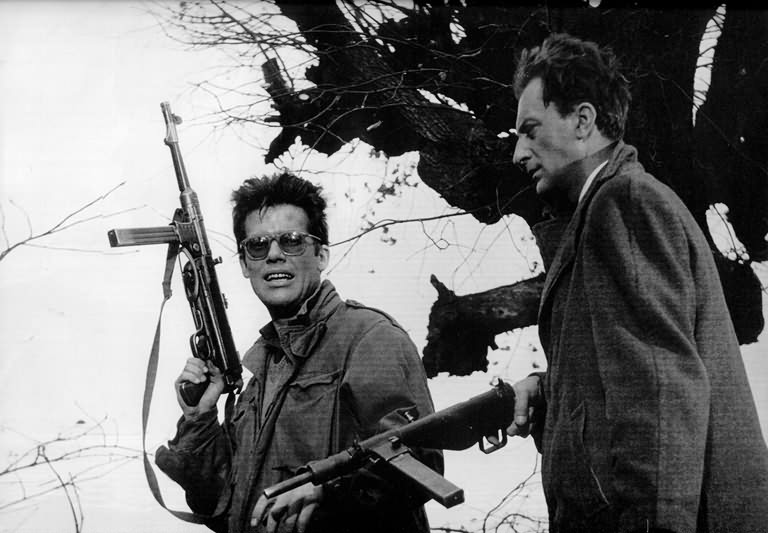 Wajda’s key masterpiece and the defining work of Polish Film School: a movement that sprung from behind the Iron Curtain and immediately established Poland as an important spot on the film map of Europe. Based on a pro-communist novella by Jerzy Andrzejewski, Wajda’s film managed to subvert its own source’s ideological slant, making the viewers sympathize with the anti-communist soldier, experiencing second thoughts over continuing his struggle after WWII ends (and Polish liberty remains marred by Soviet domination). Featuring an iconic performance by bespectacled Zbigniew Cybulski in a James Dean mode of contorted anguish, the film includes such indelible images as the bombed-out church with an upside-down crucifix hanging in the middle and Cybulski reminiscing about his dead wartime friends over a string of vodka shots (set ablaze to commemorate their lost souls). Martin Scorsese’s “Bringing Out the Dead” owes a lot to this film visually, and Greek master Theo Angelopoulos pointed to it as one of ten defining masterpieces of world cinema. 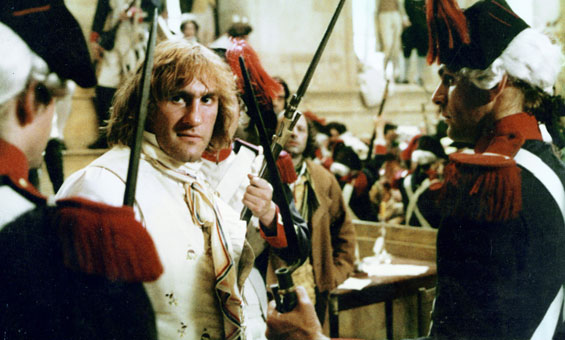 Shot in France with a (mostly) French cast, this political drama of ideas uses historical costume of the French Revolution to discuss the rampant political change that started in Poland in late 1970s with the Solidarity movement and ended with the brutal martial law of 1981. Featuring a fierce performance by Gerard Depardieu and filled with massive amount of politically-minded talk that makes it the finest philosophical film this side of “A Man of All Seasons," “Danton” is Wajda’s masterwork, second only to “Ashes and Diamonds." 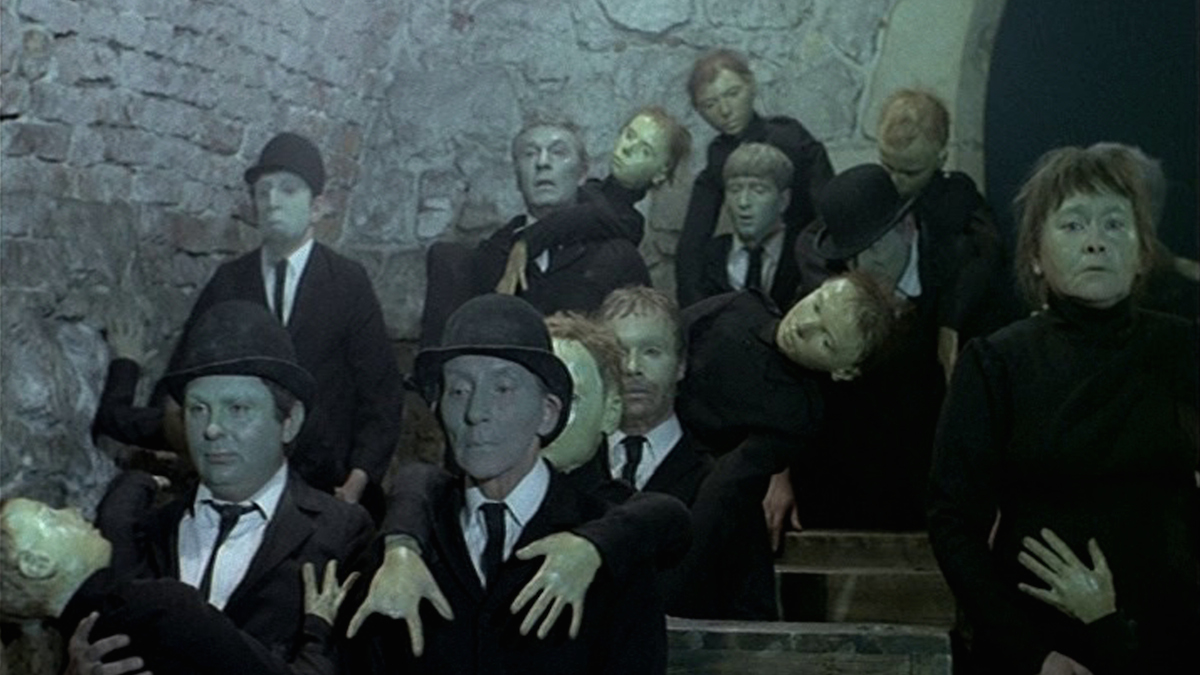 This little-seen documentary footage of Tadeusz Kantor’s seminal work of modern theatre respects the entirety of the original stage production, as well as testifies to Andrzej Wajda’s devotion to theatre as a medium. A group of seemingly deranged, elderly people dressed in rags populate a school room and start spouting repetitive dialogue, heavily redolent of baby talk mixed with half-remembered phrases from childhood education. Kantor’s idea of “theatre of death” receives full realization here: by the end, just like in Wajda’s 1972 “The Wedding," you may actually feel you just witnessed a conjuring of spirits of the pre-Holocaust Europe. [Currently unavailable on DVD] 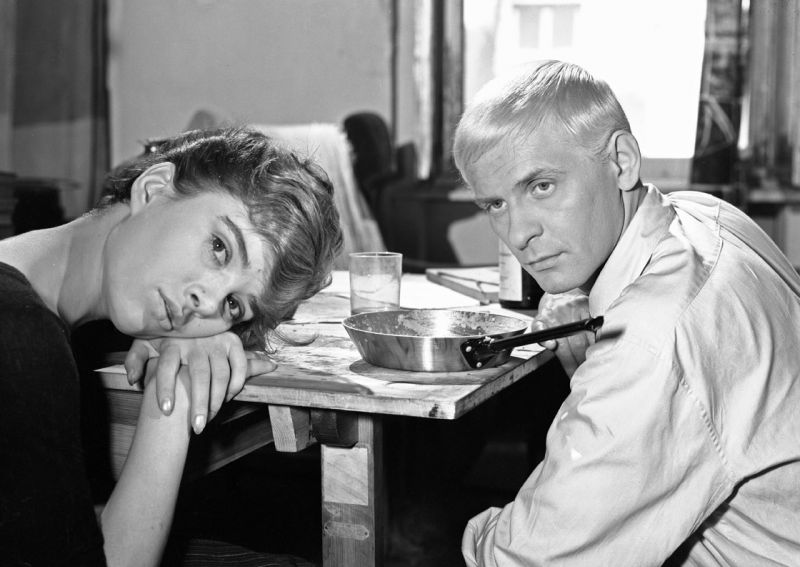 Co-scripted by yet another master of Polish cinema, Jerzy Skolimowski, this small-scale film marked something of a departure of Wajda, who for the first time in his career decided to deal with contemporary youth in a post-war setting. The film is basically a two-hander, with Tadeusz Łomnicki as the ultimate Warsaw proto-hipster and Krystyna Stypułkowska as a disillusioned girl he (sort of) philosophically flirts with. Dismissed by many at the time of its initial release for the alleged archness of its dialogue, the film has gained freshness with the passing years: take the same script and film it today in Williamsburg with Adam Driver and Greta Gerwig, and you will get an instant classic of independent quirkiness and angst. 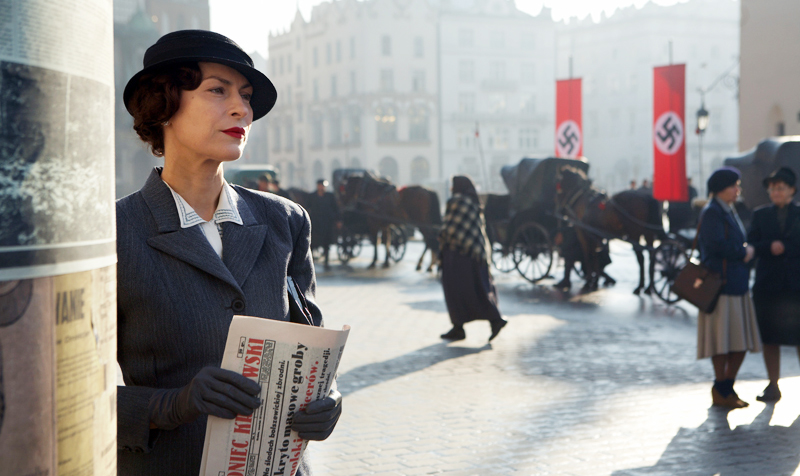 Wajda received an honorary Academy Award in 2000 from the hands of Jane Fonda herself, but in 2007 he was back amongst the nominees for Best Foreign Language Film with this anguished, seemingly dry historical recreation of the horrific 1940 Katyń forest massacre, in which the Soviets murdered about 10,000 Polish citizens (mostly officers and intellectuals) and threw their bodies into a mass pit. The film’s final minutes, focused on recreating the ghastly mechanics of the massacre itself, are all but unwatchable, but bravely testify to a crime that has been denied and lied about until 1989, when the truth could finally be told. 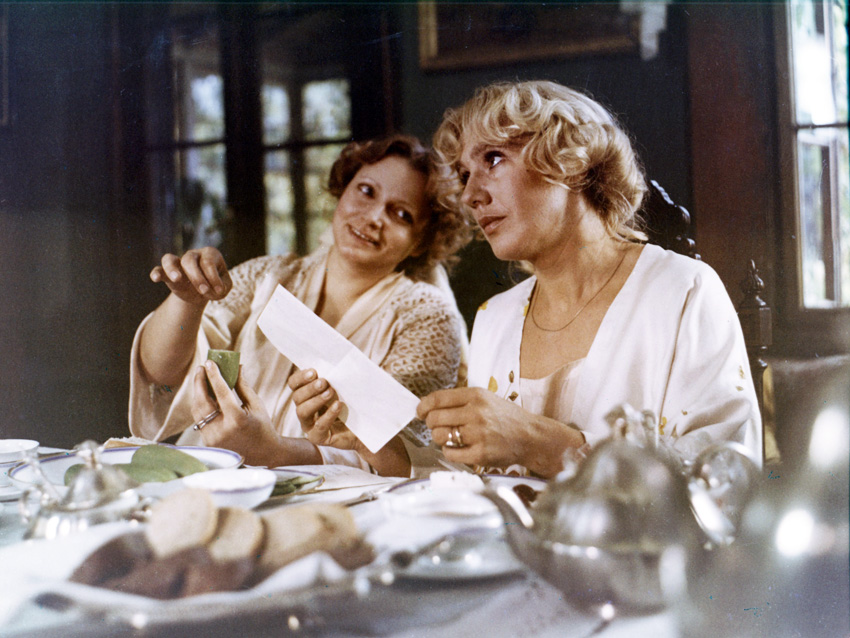 This adaptation of a short novella by Jarosław Iwaszkiewicz, Polish literature’s primary carrier of suppressed gay desire and universal melancholy, sports a brilliant turn by Daniel Olbrychski as the quiet bachelor Wiktor Ruben, who revisits the titular manor and finds all the women of his youth still there, seemingly unchanged and yet deeply scarred by time. No other Polish film in history had a better female cast, and the final scene of a joyous breakfast featuring Anna Seniuk and Maja Komorowska is a masterwork of unexpected feminine victory over one sad-sack of a guy’s narcissist brooding. The film’s look—at once honeyed and slightly decayed—testifies to the genius of DP Edward Kłosiński and the art direction by Allan Starski (later an Oscar winner for “Schindler’s List”). 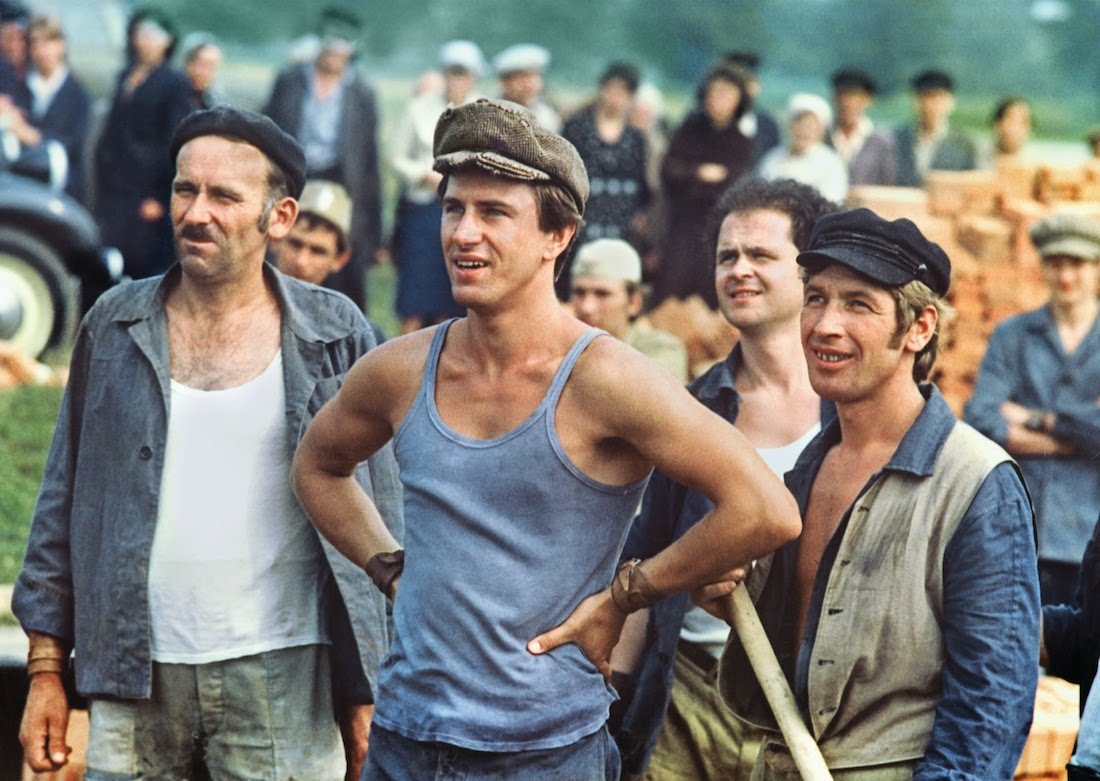 You know you are watching an exceptional film after the opening five minutes, in which a TV reporter named Agnieszka (played by Krystyna Janda, a 24-year-old debutante at the time) gets into a fight with her boss, defends her right to plunge into a story set in the then-untouched Stalinist 1950s, and travels through communist Warsaw to the fierce avant-garde beat of Andrzej Korzyński’s music sung by an all-female band called Alibabki (which could easily score a ballsy Blaxploitation film of the same era). The film, which dealt quite frankly with the crimes of Stalinism, caused much political unrest and is at least partly responsible for adding an extra spark into the nascent Solidarity movement—itself portrayed directly four years later in Wajda’s Palme d’Or-winning sequel, “Man of Iron” (1981). 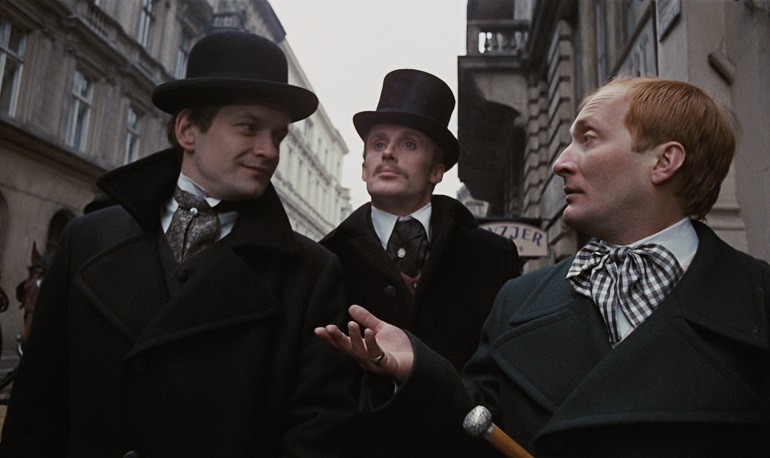 An Oscar nomination didn’t protect the film against some unjust accusation of alleged anti-Semitism on Wajda’s part (when, in fact, he righteously removed all anti-Semitic elements from Władysław Reymont’s source novel). Only now, thanks to a great DVD issued by British company Second Run, can the Western viewer see just how ambitious this epic of late-19th century capitalist excess in the multi-cultural city of Łódź really is. There are several cuts of the film, ranging from just-over-two to just-under-five hours, but the three-hour one can be seen as definitive. The film’s rich portrayal of 19th century class struggle and personal ambition ranks with Jan Troell’s “The Emigrants” and “The New Land” as the most accomplished screen realization of a world-defining era that took no prisoners and transformed our reality into the industry-reliant world of today. 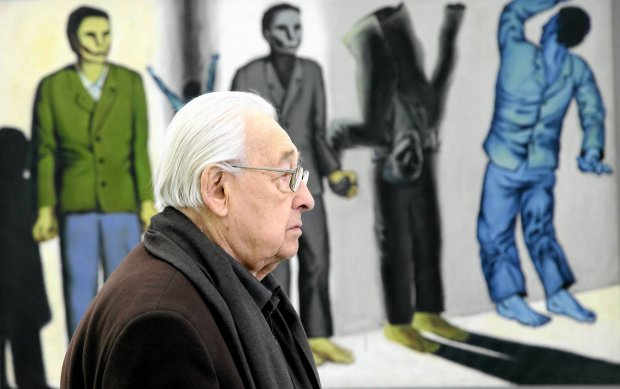 This one-hour documentary film, produced by Adam Mickiewicz Institute, may be a perverse choice to include here, but to anyone fortunate to track it down, it must count as Wajda’s most personal achievement. The film is a kind of illustrated lecture, in which Wajda revisits the paintings of his friend and artistic hero, Andrzej Wróblewski (1927-1957), whose paintings were so accomplished in dealing with immediate post-war trauma, Wajda could tell just by looking at them that he will never become a painter of comparable skill. It was when he first glimpsed Wróblewski’s "Mass Shootings," in which the mayhem of wartime executions of civilians is rendered with minimalist skill that verges on the surreal, that Wajda decided that he won’t become a painter, after all. Instead, he chose film. In a strange way, we have Wróblewski to thank for that turn of events—and this touching film shows us one artist paying a moving tribute to another. [Currently unavailable on DVD]