It took some time for me to notice Lily Tomlin. I first encountered her when I happened to watch “All of Me” (1984) on TV during the early 1990s. It was a dubbed version, so Tomlin, who played a haughty soul stuck in Steve Martin’s body in that hilarious comedy movie, felt less distinctive. Though I must say they did a fairly decent dubbing job as far as I can remember. She became gradually became more familiar to me especially after I watched “Nine to Five” (1980) on TV during the 2000s (It was not a dubbed version in that case). As getting to know more about this colorful actress’s distinguished career around TV, stage, and movie, I saw her in other films including Robert Altman’s “Nashville” (1975) and “Short Cuts” (1993). I still remember when she gave us a priceless Altman-esque moment along with Meryl Streep at the 2006 Academy Awards ceremony right before Altman went up to the stage to receive his Honorary Oscar. She and Streep touched me deeply with their lovely duet performance of “My Minnesota Home” when I watched Altman’s poignant swan song “A Prairie Home Companion” (2006) several months later.

At the current age of 76, Tomlin is still as active and robust as before, and the small independent film “Grandma” (2015) gives her a character she was born to play. While starting with a seemingly predictable premise, the movie works as a unique character drama packed with details and nuances to observe, and Tomlin is fabulous in her vibrant performance as effortlessly playing between humor, honesty, and humanity.

Tomlin plays Elle, an aging lesbian poet who has been recently unemployed. During the opening scene set in one early morning, we learn that she has been in the relationship with a much younger woman for four months, but now she decides to break up with Olivia (Judy Greer) because, as Olivia complains during their argument, their relationship seems to be going nowhere. Olivia clearly feels hurt by this, but Elle remains unmoved with her curt decision, which turns out to be pretty hard for herself.

Not long after this hurtful separation, Elle receives an unexpected visit from her teenage granddaughter Sage (Julia Garner), who needs financial help. After getting pregnant by her boyfriend, Sage decides to have an abortion, but needs $630 for her reserved operation at a clinic during late afternoon. The last person Sage wants to know about this is her mother Judy (Marcia Gay Harden).

Unfortunately, Elle is nearly broke after paying all the hospital bills for the medical treatments of her dead spouse Violet, who passed away about two years ago after more than 35 years of life with Elle. Furthermore, she does not have any available credit cards because she impulsively got rid of them to be financially free, nor are there many people around her who can immediately lend her $630.

As Elle drives her old Dodge Royal car around the town for any chance to solve her granddaughter’s problem, she and Sage encounter a number of different people, each individual moment mirroring Elle’s compelling life and personality. Acerbic, brash, and forthright, she is a force to be reckoned with to say the least, and she surely gives Sage’s boyfriend one hell of lesson when he is insolent to her and her granddaughter during their impromptu visit.

As we are amused by this and other humorous scenes, more serious moments in the film acclimate us to Elle’s personal history. At a local tattoo shop run by her transgender friend Deathy (Laverne Cox), we learn a bit about Elle’s relationship with Violet, and we cannot help but wonder about how Elle and Violet maintained their relationship for many years in spite of Elle’s abrasive personality. I guess Violet must have been an exceptional woman with her own personality to match Elle’s, though she is only glimpsed through a couple of brief shots showing her old photos.

The scene involved with Elle’s ex-husband Karl (Sam Elliott) is another good moment in the movie. When he is visited by Elle and Sage, it is apparent that there is still some affection left between him and Elle, but there are also other feelings to be aroused during their seemingly casual conversation. Sam Elliott, who has been known well for a distinctive screen presence as indelible as Tomlin’s, deftly handles this tricky emotional scene along with Tomlin, and we come to sense old personal wounds being exposed as their characters inevitably face their problematic past again. 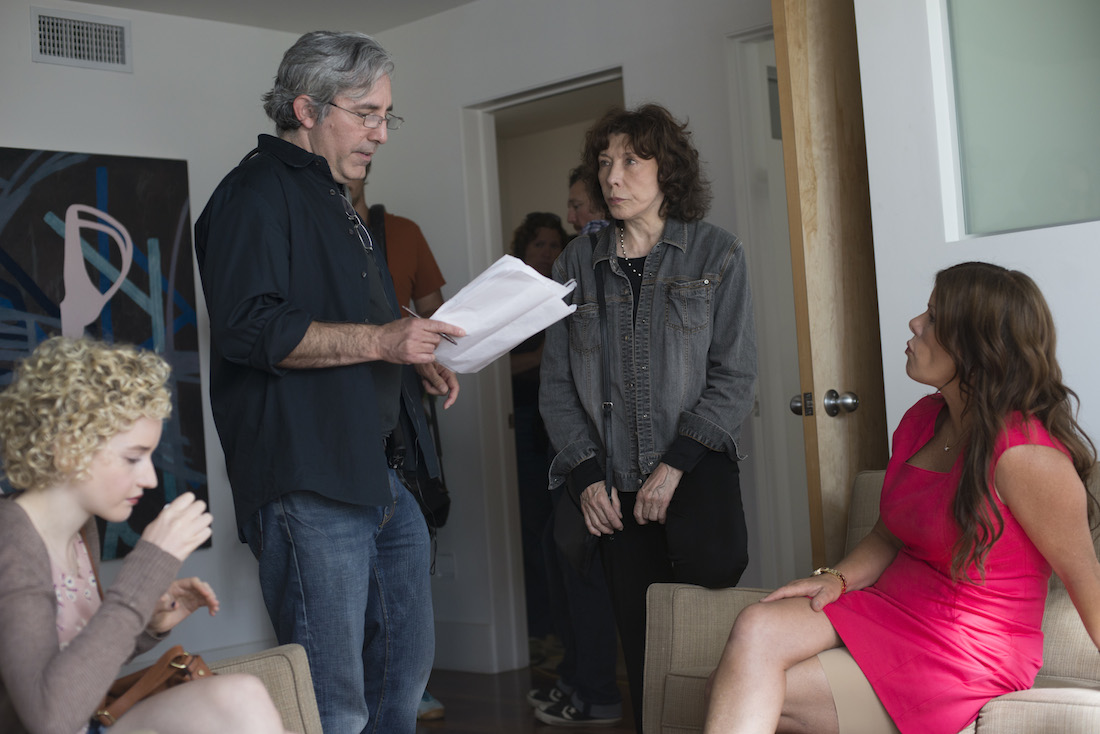 When he worked with Tomlin in his previous film “Admission” (2013), writer/director Paul Weitz saw that she was the perfect actress for a movie idea he had worked on for several years without much progress. Thanks to his succinct storytelling, the resulting indie is both lean and dense during its rather short running time. Weitz also does a smooth job of establishing the realistic background, although he and others in the production were limited by their small budget and tight shooting schedule. While the movie was shot for 19 days with $600,000, they often had to depend on their own resources in creative ways. For instance, Elle's car along belongs to Tomlin.

While its main subjects including feminism and abortion inherently draw our attention, the movie presents them with considerable frankness without spelling them out loud. Elle’s feminist activism is economically presented through a bunch of her old books including the first edition of Betty Friedan’s “The Feminine Mystique." When she talks about her relationship with Olivia, she does not hesitate to admit that she simply went for what excited and inspired her, and she is fine with that. In case of abortion, the movie maintains a thoughtful position to this sensitive subject as respecting Sage’s practical decision. Although she may be young and inexperienced, Sage knows what is best for a life as she wants, and Julia Garner has a nice scene when her character reveals more depth and intelligence than we expected.

Besides Elliot and Garner, the other substantial supporting performers in the film respectively fill their roles as holding each own small place around Tomlin. Judy Greer, an actress whom I fondly remember for her recurring supporting character in TV sitcom “Arrested Development," shows more of her serious side previously shown in “The Descendants” (2011), and Laverne Cox is warm and delightful. It is also poignant to see Elizabeth Peña in her last movie performance before her untimely death in 2014. As Sage’s workaholic mother, Marcia Gay Harden feels a little too exaggerated during her first scene, but then she has an introspective moment with Tomlin as her character and Elle come to reflect on how much they resemble each other as mother and daughter. Like her mother, Judy is a fighter who never steps back easily, and so will be her daughter, probably.

While they have mostly stayed in the mainstream since their big break through “American Pie” (1999) and their Oscar-nominated work “About a Boy” (2002), Paul Weitz and his brother Chris have occasionally tried different things at the fringe of Hollywood from time to time. Although he might have hit his lowest career point in “The Twilight Saga: New Moon” (2009), Chris Weitz subsequently surprised us with a modest but heartfelt immigrant drama “A Better Life” (2011), which garnered an Oscar nomination for lead actor Demián Bichir’s moving performance. Meanwhile, after being stuck with the unenviable job of directing “Little Fockers” (2010), Paul bounced back with “Being Flynn” (2012), a sincere little film that reminded us that Robert De Niro is still a great actor, despite numerous paycheck roles he took during recent years.

With “Grandma," Weitz did another precious thing to admire. Through its specific details, the movie makes us look into its unconventional heroine and her life with interest and curiosity, and then we come to discern human matters as more emphasizing with her. Elle is definitely not the nicest person in the world, but she is a fun, vivid character to remember thanks to Weitz and Tomlin. Along with Imperator Furiosa and others, Elle deserves to be mentioned as one of the strong female characters we saw in 2015. This thorny lady does not smile much, but, as you will see, it is really something special when she does.