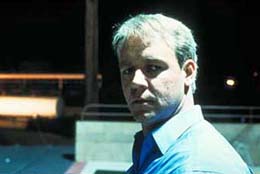 "The Insider" is one of Michael Mann's best films and it represents a departure from the usual themes. One constant in his other movies is the imposing, menacing but sympathetic villain figure. They may all be capable of great violence but the tragic side of their stories helps the audience identify. In contrast, "The Insider" gives us something completely different: a faceless and unsympathetic enemy that bends the will of those who get in its way without the need of doing anything particularly spectacular or even executing it on-screen: a villain aware that the fear of losing something like health insurance may be enough to shut its victims up. Its power comes from the income provided by the countless smokers unable to quit its product and its most important goal is to make sure that they never do.

"The Insider" (1999) is based on the true story of Jeffrey Wigand (Russell Crowe) who allegedly was fired from a vice-presidency at Brown & Williamson for his reluctance to join the company's efforts to maximize the addictiveness of cigarettes. He was put through the hell of losing is job and family before he could spill the beans on "60 Minutes." Only to later learn that the program and the CBS network were not willing to risk their futures to the threats imposed by the tobacco company and their unlimited legal budgets.

It is only through a complex web of connections in several media and legal outlets that the show's producer, Lowell Bergman (Al Pacino), was able to clear legal impediments and allow the story to air, in the process inflicting damage to the reputations of the network, the show and newscaster Mike Wallace (Christopher Plummer) whose biggest concern is the stain this will leave in his otherwise remarkable career. As he correctly states: "fame lasts 15 minutes, infamy lasts a little longer."

As previously discussed in my "Collateral" review, Michael Mann's movies display his great understanding of the world of crime and in "The Insider" he shows an equally effective comprehension of the media's complicated workings. His characters here, like his criminals, also gather in bars, phone booths and under bridges -- but instead of planning criminal hits they now tip each other on the stories that will help their own individual causes. In this sense, "The Insider" is most reminiscent of "All the President's Men" with one important difference: the Watergate dealings were complex to a point that Redford and Hoffman had to spend much of their screen time explaining what exactly was going-on. I felt it didn't didn't really need big name stars for such a purpose. For its part, "The Insider" not only succeeds in making its intricate dealings fascinating but they're actually somewhat secondary to the film's engrossing characters and their dilemmas. They represent the heart of the movie and are accurately referred to by Bergman as "ordinary people under extraordinary pressure".

Unlike "All the President's Men," the leading players in "The Insider" are crucial to the success of the movie: especially Crowe who convincingly played a clumsy, middle aged man in crisis. Amazingly, he did did it between his quite contrasting roles of "LA Confidential" and "Gladiator." His Jeffrey Wigand seems already paranoid at the beginning of the film, so it becomes hard for us to be certain if the physical threats to his family were indeed genuine.

Was the tobacco company responsible for the bullet in his mailbox, the e-mail death threats or the man following him while by playing golf? No charges were filed and as dramatically effective as they are to the film, there a sense of over-kill to them considering that B&W's legal means and alleged smear campaign had already managed to sink Wigand into great depths. He had dedicated his life to keeping his daughters and (very frail) wife happy at the cost of doing a job he hated but we spend most of the picture wishing he'd simply shut up as his previously unhappy situation seems like a bed of roses in comparison to his current family life. None of his problems can be solved by appearing in "60 Minutes" but at least there's a chance of gaining some of his self respect back. 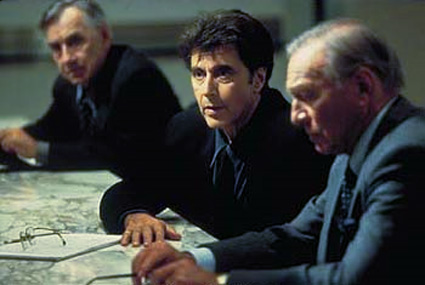 Al Pacino's plays the "60 Minutes" producer, whose job and livelihood depends one thing above all: always keeping his word. Bergman's relationship with Mike Wallace hinges on the kind of trust that, if broken, can never be fixed no matter how much the they may want to let bygones be bygones. It's difficult to imagine anybody playing a real life figure like Mike Wallace but Christopher Plummer manages to match the weight of his personality; a couple of the film's best scenes result when two minor characters get in his way, with one of them (Gina Gershon) getting steam-rollered in the process. It's curious that Bergman never becomes a target for Wallace's wrath; I believe this can be explained by the fact that, according to the film, he was the only one at CBS able to consistently stand on high ground. At any rate, Gershon's fate seems mild when comparing it to that of the "Big Tobacco" attorney who dares smirk at one of the prosecutors (Bruce McGill) in one of those great, cinema "wake you up" moments. 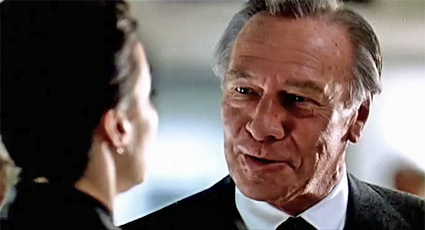 "The Insider" starts by showing us the intricate dealings behind the making of a "60 Minutes" Beirut segment that lasts no more than 10-15 minutes, with a topic that couldn't be more different than the main theme of Big Tobacco. My guess is that Mann included it here so that the audience could understand the kinds of situations a producer most encounter in order to get all the people involved in the project together and what his relationship with the show's newscaster is all about.

This story serves in better understanding Bergman's subsequent work on the Wigand story but the result of interviewing of a fictional Ayatollah is so fascinating, it becomes a temporary letdown as we realize we are moving on to a different story. But that's the way it had to be. "The Insider" at heart is not the story of "60 Minutes" but that of Lowell and Wigand. We'll never know the whole truth behind Wallace and Hewitt supposedly caving in to CBS Corporate's wishes of running an alternate, less dangerous version of the Wigand segment, or what their real motives were. But what makes this a great movie is the personal story of the whistle-blower who turned out to be the wrong person for a giant corporation to corner, especially since they were well aware they were correct to be afraid of him in the first place.

Despite appearing on national TV and ending up a hero, Wigand's return to his formerly, opulent lifestyle mostly impossible but that may have been for the best; by the end of the movie he finds the happiness of being able to share his knowledge in a simpler job and a simpler life without the wife who clearly was there only for the "good times" section of their marriage vows.

Much as "The Social Network" is a reflection of our current times, so does "The Insider" reflect those years. One of the CBS people here says, "no Fortune 500 company has ever had a whistle-blower!" That remained an accurate statement only for a couple of years, as the infamous Worldcom and Enron insider scandals were just around the corner. Big Tobacco may be this film's villain but let's not forget it did exactly the kinds of things corporations protecting their own best interest always seem to do. At the end of the day it was countless cigarette buyers who were the ones responsible for the creation of this particular monster.