As we commemorate four years without Roger's words, we wanted to know from our readers what memories of Roger mean the most to them. Below are just a few of the submissions that we received over social media and our comment section.

Commenter SDG was a young critic who received support and recognition from Roger, which he recalls fondly:

Along with his days doing Cinema Interruptus and teaching at the University of Chicago, Roger was known for being a positive influence throughout academia. As Gregory W. Beaubien (@GregBeaubien) shares:
Advertisement

Chicago film critic Sarah Knight Adamson shares a special interaction she had with Roger at a screening in 2012:

Commenter Richard Harney offered this experience of meeting Roger in 1979 at a screening of "The Wild Bunch" in Chicago: 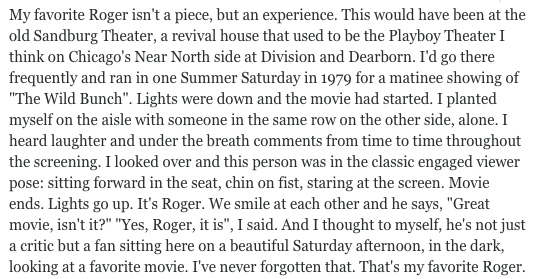 Matthew Passantino (@MattPassantino) expressed this memory of meeting Roger, which included a discussion of one of Roger's most popular reviews:

Commenter Ernesto has a fond memory of meeting Roger at Sundance in 2006: 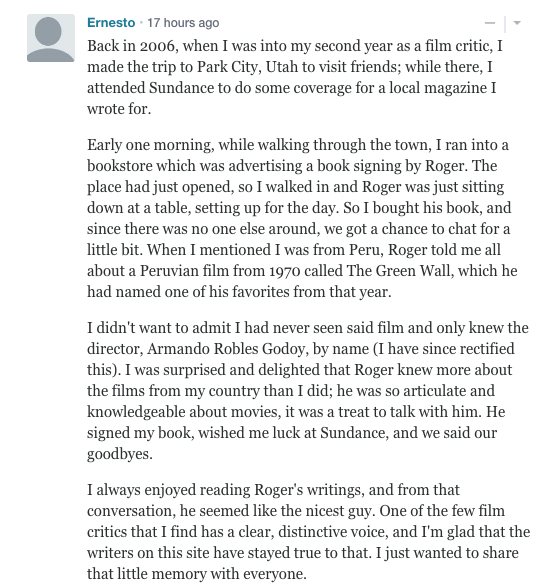 With such a presence, Roger was also known for bringing his influential criticism to the public, beyond writing reviews or sharing them on TV. Twitter user @bapatoff remembers this moment when Roger stood up for the filmmakers of "Better Luck Tomorrow" during a showing at Sundance:

Commenter citizenmilton celebrates Roger's speech at the National Press Club event in 1995, which includes one of his most comment film philosophies:

I have many favorite memories of Roger, but my favorite Roger right now is about his "leave of presence."

Specifically, I remember Ebertfest 2013. Roger had died just a few weeks earlier -- he'd been quite ill, but we'd all thought he'd be able to attend Ebertfest. Then, he wrote an article saying that he'd be taking a "leave of presence" -- what a wonderful phrase. And then he was gone.

His death, just a few weeks before Ebertfest, led me (and others) to approach the festival with a mix of need and trepidation -- need for healing, and peace, and for the comfort of being in the company of hundreds of others who loved him and valued him in the same way I did. But trepidation, too, about having to confront his absence and the reality that he was gone.

When we arrived at the historic Virginia Theatre, Chaz told the unusually somber crowd that Roger had programmed the festival before his death, selecting the films and the special guests himself. And as the films ran, It became clear that Roger had built the program knowing that he wouldn't be there to watch it with us -- that he knew we'd be watching the films after he was gone, and that this was a final gift that he had given all of us before his death.

The entire program was beautiful. (You can see the list of films -- as well as videos of the speakers -- online at ebertfest.com.)

But the experience of Pablo Berger's "Blancanieves" is what moves me to write today.

In introducing his film, Berger talked about how much it meant when Roger called him after Telluride (?) to tell him that he needed to show "Blancanieves" at Ebertfest. And the experience of seeing that film, in that place, at that moment, with that audience was extraordinary. A Spanish fairy tale -- a silent film, in black and white -- about love and dreams and life and death -- it was perfect. And in the film's final teardrop, all 1,500 people in the theatre saw the perfect message from Roger.

The crowd's reaction was unlike anything I've ever experienced -- a standing ovation, with tears and loud cheers, and whistles, and "bravo"s, as if we were at an opera!

And during the ovation, I cried and cried -- not only because Roger was gone (although that was certainly part of it) -- but also because he was there, so profoundly absent *and* present.

Roger's leave of presence was so real that day -- and it still is. I still think of Roger every day -- when I see a new movie by Werner Herzog or Martin Scorsese; when I read the work of young critics on RogerEbert.com when I see a new film by a great new woman director and imagine how Roger would have championed her (because you know Roger would've championed a great new woman director!).

And I think how lucky we are, to have had him when we did -- and lucky that he is still with us, talking to us through the movies, and in his leave of presence.