TWENTY-SIX years after his seminal masterwork, "Do the Right Thing," Spike Lee received an Honorary Oscar at this year's Governors Awards from the Academy of Motion Picture Arts and Sciences (AMPAS) on November 14th. The official AMPAS site dubs Lee a "champion of independent film and an inspiration to young filmmakers," while citing several highlights in his distinguished career, including such celebrated titles as "Mo' Better Blues," "Malcolm X," "He Got Game" and "The 25th Hour." Spike has amassed an impressive body of work over the years, and I am happy to see him recognized.

THREE key Lee collaborators—Denzel Washington, Samuel L. Jackson and Wesley Snipes—presented the filmmaker with his well-deserved accolade, while sharing some amusing memories. Snipes, speaking with a Nelson Mandela-like accent, recalled the ironic year when he and Lee accompanied Ruby Dee to the Oscars for her nomination, but were not allowed to enter the Governors Ball when they were not recognized by the ticket-takers at the door. Washington praised Lee for "putting more African-Americans to work in this business than anyone else," while Jackson affectionately likened Spike's politics to that of an "American anarchist." Jackson said that Spike made it viable for ethnic filmmakers to tell personal stories in their own way. 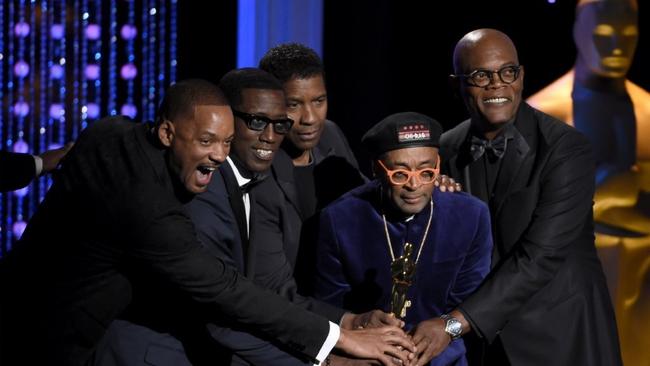 LEE'S SPEECH, posted in its entirety below, was full of gratitude. He spoke about being a third generation Morehouse College graduate; about his grandmother, the daughter of a slave, but also a college graduate, saving money for fifty years to send him to college and help him pay for his first film; about how film found him in the summer of 1977, and how NYU Film School overlooked his grades and considered his talent and passion in admitting him to its program where both his children now attend. Yet, his speech was also chockfull of the unapologetic convictions that have made him such an icon over the years. His speech was marked by an impassioned call for diversity, in which he claimed that "it's easier to be President of the United States as a black person than to be head of a studio or a network." He also said that the fact the film industry is so far behind the sports industry is "ridiculous."

“YOUR WORKFORCE should reflect what this country looks like,” Lee said. “Everybody in here probably voted for Obama, but when I go to offices, I don’t see no black folks, except for brother man who is the security guard who checks my name off the list as I go into the studio. So we can talk, you know, ‘yaba, yaba, yaba,’ but we need to have some serious discussion about diversity."

SPIKE LEE will be returning to Chicago this Sunday for the premiere of his widely anticipated film, "Chi-Raq." The film's title caused a big uproar with the Chicago City Council this summer who thought that it was far from complimentary to compare their city to a war zone. But this is my city too, and I love it dearly, however, from January 1, 2015 to November 19, 2015, 2,674 people have been the victims of gun violence in Chicago, eclipsing the 2014 number. I applaud Spike for calling attention to the growing crisis because something has to be done. And in the areas of the city where gun violence also results in death, we can’t afford to keeping losing this generation. Filmmaker Steve James directed a compelling documentary in 2011, "The Interrupters," shining a light on this issue.

FATHER PFLEGER, the revered priest who has been fighting for the community for years, consulted with Spike on this movie, so I expect there to be an authenticity about some of the details. There are also many neighborhood activists and philanthropists who give their time and money to be part of the solution. But there is a need for so much more in terms of education, jobs, increased parental supervision and community activities and improved relations with the police and our politicians. Our children need to feel that they have a tangible safety net, that people care about them, and that they have a stake in this city's future. They need something to look forward to.

IT WAS WRONG for the City Council to threaten Lee with the loss of tax credits if he didn’t change the name of his movie. I have seen the trailer, and I look forward to seeing the complete picture. Most of Spike Lee’s movies,  are interesting and have a social awareness that is uncommon among modern filmmakers. People are jumping to conclusions about whether his film is either too serious and too violent or not serious enough. The plot is based on the Greek play "Lysistrata" by Aristophanes, and details the strike launched by women as a result of gun violence, denying their men any sex until they end the cycle of gang warfare. One woman, April Lawson, has even begun a Change.org petition encouraging women in Chicago to make life imitate art.

IN A POWERFUL interview with CNN's Anderson Cooper, Lee quoted his wife, Tonya, who observed that "Chicago is the canary in the coal mine." "New York City has three times the population of Chicago, yet Chicago has more homicides," Lee noted. That sort of statistic gives our city a far worse reputation than any film or film title ever could.

For more info on "Chi-Raq," visit its official site.