Los Angeles, CA: Sundance Institute will remember and celebrate journalist and film critic Roger Ebert by honoring him with the Vanguard Leadership Award in Memoriam, in recognition of his advocacy of independent cinema. He was a frequent attendee of the Sundance Film Festival, where he discovered and supported films like Hoop Dreams, Man Push Cart, Come Early Morning, Longtime Companion, Metropolitan, The Brothers McMullen, Crumb, Picture Bride, American Movie, and The War Zone.  Sundance alumni who count him as an advocate include Steve James, Spike Lee, Kathryn Bigelow, Steven Soderbergh, Quentin Tarantino, Errol Morris and Werner Herzog. Beginning in 1967 with his film review column in the Chicago Sun Times, Ebert was a fierce and tireless champion of original storytelling. He is equally known for the television programs Sneak Previews, At the Movies, Siskel & Ebert, and Ebert & Roeper. Ebert will be the second recipient of the Vanguard Leadership Award. The first was presented this year to philanthropist and Sundance Institute Trustee George Gund.

Robert Redford, President and Founder of Sundance Institute, said, “Roger Ebert was one of the great champions of freedom of artistic expression. When the power of independent film was still unknown and few would support it, Roger was there for our artists. His personal passion for cinema was boundless, and that is sure to be his legacy for generations to come.” Redford will present the award to Ebert’s wife, Chaz.

Sundance Institute also announced filmmaker Ryan Coogler (Fruitvale Station) will be honored with the Vanguard Award, presented by Tiffany & Co. Actress Kerry Washington will present the award to Coogler at the third annual ‘Celebrate Sundance Institute’ benefit on June 5, 2013 in Los Angeles. Director Coogler’s first feature film, Fruitvale Station, was selected for Sundance Institute's Feature Film Program Screenwriters Lab and Artist Granting Fund and went on to win both the Grand Jury Prize and the Audience Award at the 2013 Sundance Film Festival. Fruitvale Station will screen in the "Un Certain Regard" section at Cannes this month and will be released by The Weinstein Company in July 2013.

Sundance Institute relies on the generosity of donors who share a commitment to nurturing new artists, supporting unique and diverse creative voices, and furthering the reach of independent feature and documentary films around the world. The event will raise crucial funds to offset the non-profit Institute’s year-round programs for artists, including Labs, grants and the Sundance Film Festival. For information on benefit event tickets and tables or sponsorship opportunities, visit the events site at http://www.sundance.org/labenefit. 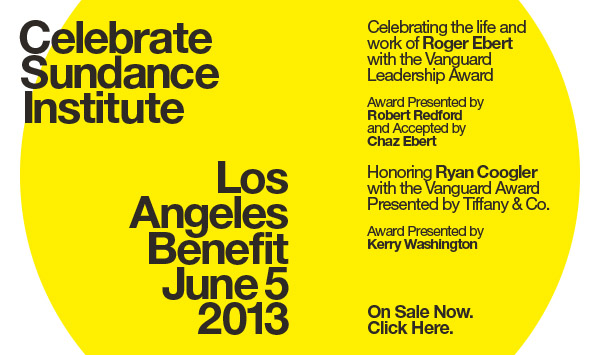