A Revolution of Love: Chicago Commemorates Empathy and Roger Ebert

On a cloudy but ever so lively Chicago Tuesday morning, a group of film enthusiasts, Chicago figures, charity leaders, and many others converged outside the Chicago Theatre. They were all united by being fans of film critic Roger Ebert, the man who has the only star outside that landmark of a building, where in 2005 Roger delivered his famous quote about movies functioning as machines that generate empathy. It’s a sentiment that I've heard countless people share, and it was brought back to the theater as a main event, as important as ever.

With the word “Empathy” filing all sides of the Chicago Theatre’s famous marquee, it was the occasion for a commemoration of the four years that have passed since Roger took his “leave of presence." It was also a moment to celebrate the good that has been done in the world during that time, just as Roger had preached. This was more than a day to celebrate a man who loved the movies and knew how to talk about them, it was, as Chaz Ebert put it, “About shining a light on the people who exhibit empathy and inspire it in others.”

Among the many Chicago figures that spoke, which included Rich Moskal, director of the Chicago Film Office and Christine Dudley, director of the Illinois Film Office, was Father Michael Pfleger of St. Sabina Church, who spoke about knowing Roger not as a film critic, but “as a person.” He remarked that Roger “never lost his commonness,” and that his criticism “allowed us to ask what movies mean to us and how they can make us better people.” He continued that through his work both as a critic and as a human being, “Roger taught us living, loving, and empathy.”

That spirit was being celebrated with Chaz awarding 21 grants from the Ebert Foundation to various charities and  arts organizations who celebrate the values of the day: “Empathy, Kindness, Compassion and Forgiveness.” Che “Rhymefest” Smith, the Grammy and Oscar-winning rapper who co-wrote "Glory," for the movie "Selma," was there in his capacity as creative director of the nonprofit, Donda’s House with his wife Donnie Nicole Smith. His position at Donda House enables him to support Chicago youth in their endeavors in the arts. He spoke outside the theater about the significance of Chaz and Rogers’ support for such organizations. Rhymefest admired the example they provided for other philanthropic couples. He noted that they represent how to be “of service, and not just self-serving.” Rhymefest added that they are “pillars in how to make things better, and how to rebuild cities.”

Another recipient of a grant from the Ebert Foundation was the Urban Prep Academy, an all-black male high school with a 100% graduation and college attendance rate. Tim King, president and CEO of Urban Prep Academies, was accompanied by two Urban Prep students who had already received acceptances from over twenty colleges. They received a big ovation from the crowd. King said that a gesture like giving goes beyond what a person thinks they’re initially doing, that we can’t see the full impact. “What they’re doing really does change the world,” King said.

Before the commemoration headed inside to the Gene Siskel Film Center of the School of the Art Institute for a luncheon, Chaz commented: "We’re not talking about movies today. The reason we talk about Roger four years later, the reason that I loved him so much, was because of his heart. Roger used the copyrighted phrase "Thumbs Up,' or "Two Thumbs Up' as a way to rate movies. But today we will give him a Thumbs Up for his empathy and caring for other people." Everyone responded by uniting in the two thumbs up gesture. 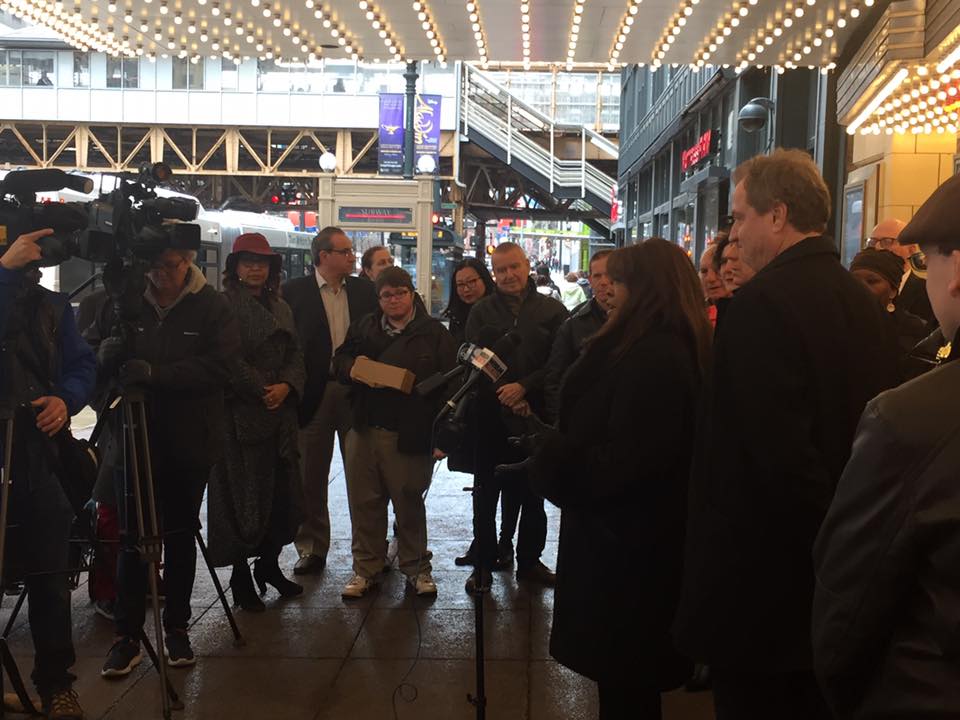 After a luncheon, the Commemoration Tribute continued with speeches at the Gene Siskel Film Center given by film industry stalwarts and leaders of charitable nonprofits chosen by Chaz for exemplifying the good works they do in the community. Before a list of incredible Chicagoans spoke about their organizations and how Roger’s values were the kind that motivated their selfless endeavors, Chaz spoke about the importance of kindness. She shared a story about what happened after Roger wrote a scathing review of “Deuce Bigalow: European Gigolo” and based the title of his next book “Your Movie Sucks” on that very review. Years later, the film's star Rob Schneider sent Roger a set of flowers with a beautiful note when he was in the hospital. Roger was touched. “We could laugh about that review," Chaz said, "But not that day and not today. There are so many things that are ugly or negative, and for at least one day I don’t want to be a part of that. Let's celebrate the good things that came out of that interaction."

A tribute video by director and editor Scott Dummler was shown with scenes of Roger walking along the streets and giving thumbs up to people like it was the peace sign. After the film, Chicago critic and president of the Chicago Film Critics Association, Dann Gire, spoke about spending endless hours in the dark and an illuminated screen with Ebert, and how Ebert “expanded the definition, the scope and the power of arts journalism.” Michael Phillips of the Chicago Tribune spoke about the good that Ebert did, and how Tuesday’s occasion was “A day where you can remember just how much good one person can do.”

One of the next people to speak was filmmaker Steve James, who not only created one of Roger’s favorite documentaries, “Hoop Dreams,” but as a director of the documentary "Life Itself," crafted lasting images of Ebert.  Having known Roger when filming him for the documentary before the critic’s passing, James spoke about Roger’s ability as a critic and as a force. “He was so generous and knew how to use his power for good.”

That generosity and that power continued today with the grants that were rewarded to 21 different charities and institutions, many of which had a representative there to speak about how their efforts are supported by those who share the values Roger loved in cinema. Tamar Manasseh, founder of Mothers Against Senseless Killings (MASK), spoke about how empathy was why she started the organization that seeks to protect Chicago’s children and provide them communities that are safe from violence. Manasseh said, “We’re in this together. If you don’t speak up for me, who is going to speak up for you when it’s your turn?”

Other institutions, including Mercy Home for Boys and Girls (which helps children escape abuse, poverty and neglect) and 21st Century Dads (which improves the lives of children by raising awareness of resources for greater father involvement), also talked about the way in which their organizations are fueled by empathy. Che “Rhymefest” Smith called today's commemoration “a revolution of love,” while talking about the importance of building a community when receiving your own success. “The only way to increase our bounty is to increase what we give,” he said. “It’s all a part of a village—who pours it back?” He said to Chaz, “What you’ve been doing, you’re still pouring. You’ve been doing this with your husband for decades.” 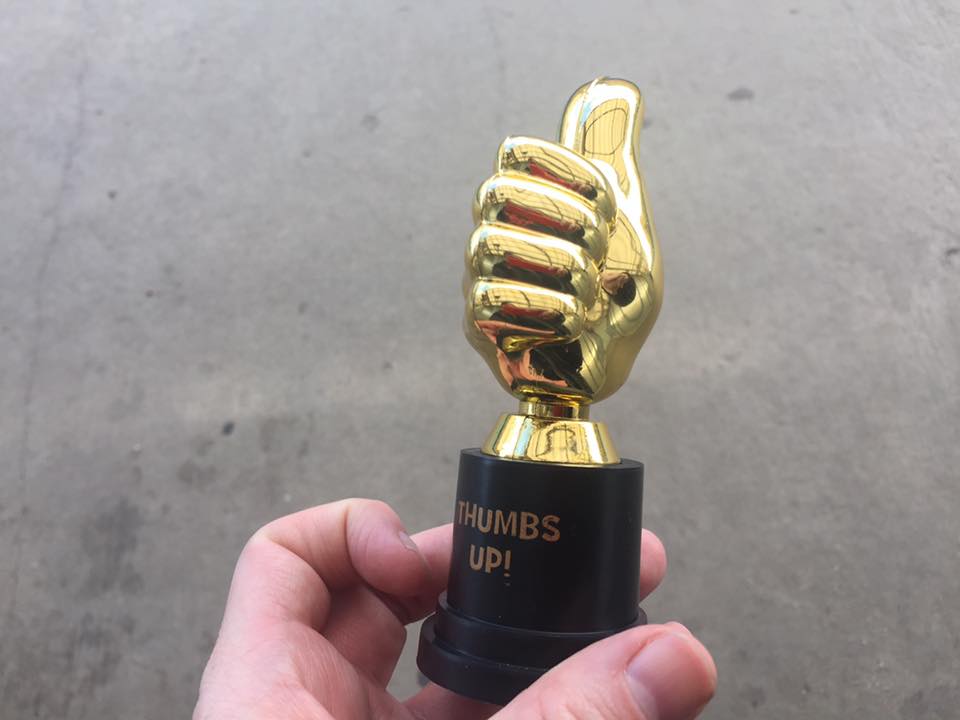 Current students from Crane Medical Preparatory High School were also in attendance, representing a school that is Chaz’s alma mater, but at one time faced closure. With members of Chaz’s own graduating class in the audience, Chaz told of how the school was saved from closing by a rally of  the community and her class of 1969. They helped provide scholarships to the students and even took them on a trip to Springfield to the Abraham Lincoln Presidential Library. Prior to that trip, some of the students had never left Chicago.

After a wealth of inspirational speeches and examples of empathy throughout Chicago, Quentin Love of the Love Foundation, which feeds and clothes the needy every week at his West Humboldt Park restaurant, united everyone in a random act of love. He asked the entire room of attendees, many of which had known Roger personally or spent years with his words and his values, to look the person next to them in the eye and tell them, “Hey, I love you.” With the room united, Love then said, “Chicago is all about the random act of love.” Attendees, including myself, smiled and took the opportunity to give a few more hugs to more than just one neighbor and to smile just a little bit bigger when telling a stranger that they loved them. It was a random act, and one that might have something to do with the sun emerging once we all left the event. But we know that such an act doesn’t have to be so random, especially with the presence of so much empathy around us.