"Deuce Bigalow: European Gigolo" makes a living cleaning fish tanks and occasionally prostituting himself. How much he charges I'm not sure, but the price is worth it if it keeps him off the streets and out of another movie. "Deuce Bigalow" is aggressively bad, as if it wants to cause suffering to the audience. The best thing about it is that it runs for only 75 minutes.

Rob Schneider is back, playing a male prostitute (or, as the movie reminds us dozens of times, a "man whore"). He is not a gay hustler, but specializes in pleasuring women, although the movie's closest thing to a sex scene is when he wears diapers on orders from a giantess. Oh, and he goes to dinner with a woman with a laryngectomy, who sprays wine on him through her neck vent.

The plot: Deuce visits his friend T.J. Hicks (Eddie Griffin) in Amsterdam, where T.J. is a pimp specializing in man-whores. Business is bad, because a serial killer is murdering male prostitutes, and so Deuce acts as a decoy to entrap the killer. In his investigation he encounters a woman with a penis for a nose. You don't want to know what happens when she sneezes.

Does this sound like a movie you want to see? It sounds to me like a movie that Columbia Pictures and the film's producers (Glenn S. Gainor, Jack Giarraputo, Tom McNulty, Nathan Talbert Reimann, Adam Sandler and John Schneider) should be discussing in long, sad conversations with their inner child.

The movie created a spot of controversy last February. According to a story by Larry Carroll of MTV News, Rob Schneider took offense when Patrick Goldstein of the Los Angeles Times listed this year's Best Picture Nominees and wrote that they were "ignored, unloved and turned down flat by most of the same studios that ... bankroll hundreds of sequels, including a follow-up to 'Deuce Bigalow: Male Gigolo,' a film that was sadly overlooked at Oscar time because apparently nobody had the foresight to invent a category for Best Running Penis Joke Delivered by a Third-Rate Comic."

Schneider retaliated by attacking Goldstein in full-page ads in Daily Variety and the Hollywood Reporter. In an open letter to Goldstein, Schneider wrote: "Well, Mr. Goldstein, I decided to do some research to find out what awards you have won. I went online and found that you have won nothing. Absolutely nothing. No journalistic awards of any kind ... Maybe you didn't win a Pulitzer Prize because they haven't invented a category for Best Third-Rate, Unfunny Pompous Reporter Who's Never Been Acknowledged by His Peers."

Reading this, I was about to observe that Schneider can dish it out but he can't take it. Then I found he's not so good at dishing it out, either. I went online and found that Patrick Goldstein has won a National Headliner Award, a Los Angeles Press Club Award, a RockCritics.com award, and the Publicists' Guild award for lifetime achievement.

Schneider was nominated for a 2000 Razzie Award for Worst Supporting Actor, but lost to Jar-Jar Binks.

But Schneider is correct, and Patrick Goldstein has not yet won a Pulitzer Prize. Therefore, Goldstein is not qualified to complain that Columbia financed "Deuce Bigalow: European Gigolo" while passing on the opportunity to participate in "Million Dollar Baby," "Ray," "The Aviator," "Sideways" and "Finding Neverland." As chance would have it, I have won the Pulitzer Prize, and so I am qualified. Speaking in my official capacity as a Pulitzer Prize winner, Mr. Schneider, your movie sucks. 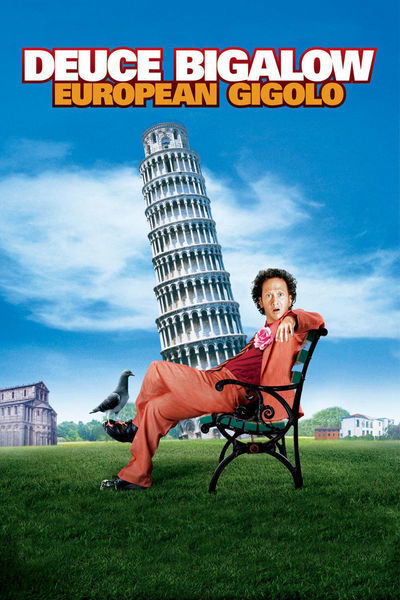 Til Schweiger as Heinz Hummer