Who will win the Palme d'Or?

Who will win the Palme D'Or? I expect top prizes for Michael Haneke for his film, "Amour," with Jean-Louis Trintignant and Emmanuelle Riva, but I am terrible at the awards-guessing game. I think "Amour" is one of the very best films in the festival with its harrowing portrait of the mental and physical deterioration of an esteemed piano teacher after a series of strokes, and the husband who must bear witness to this as he takes cares of her.

Haneke's film is so mature and well done that its emotional impact builds quietly, from the core. You marvel at how he layers the scenes of a marriage so naturally that you know the couple has been together for decades in a relationship that is comfortable and emotionally enriching. And so when they make their choices you are right there with them emotionally until the bitter end, and there is no judgment about the choices made.

The film opens with the couple enjoying a piano concert of one of her former students. They come home to find someone has tried to take a screw driver to their door, but he tells her not to worry, and reminds her instead of how beautiful she looks. He awakens in the middle of the night to find her sitting up in bed staring into space, and the next day at the breakfast table she again goes blank and loses track of time.

It turns out that she has a blocked carotid artery that requires surgery, but the surgery is not successful and she eventually has a stroke. She was once a great piano teacher but now the stroke has paralyzed her right side. Her husband is solicitous and goes out of his way to help her, but she eschews any extra help and reminds him that she doesn't want to be fussed over. She wants to retain her independence and her dignity.

Unfortunately this is the beginning rather than the end of their woes. They go from bad to worse, but before they do you see them sitting at the dinner table eating a nice meal. He helps her cut her food, but otherwise she feeds herself. He helps her get out of her wheelchair and on to the toilet, but only partially. She can still do a lot with the left side of her body and she doesn't want to be a burden to him or their relationship.

Over the newspaper at breakfast she jokingly tells him that he can be a monster, but that is only to hide his tenderness underneath. You can see the love, and respect and devotion they have for each other. He buys her books and she can still sit in bed and hold the book on her lap and turn the pages with her good hand. They listen to music, entertain a former piano student of hers, and look content in a way that is earned by years of sharing experiences, both the quiet moments and the big ones, and of liking each other.

This is really an exquisite film but Haneke won the Golden Palm two years ago for his film "The White Ribbon," and so it may be too soon to give him the prize again. 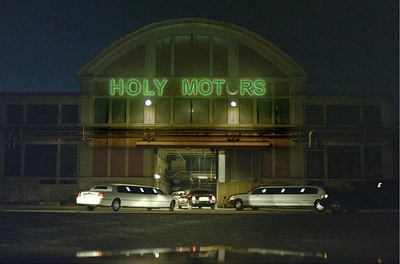 There is much talk of an upset by Leos Carax with his far out film "Holy Motors." Carax had the first film that garnered both enthusiastic boos and applause after its showing. It also generated a lot of buzz on the internet amongst a dedicated cult of fans waiting for the follow-up to his equally puzzling "Pola X" over ten years ago. "Holy Motors" is more assured filmmaking by Carax, helped along by the performance of Denis Lavant, who plays a man being driven around in a white limo equipped with a dressing room for him to get into makeup and wardrobe for "the Agency." He plays various roles from that of a rich banker, then a beggar woman on the streets, and a motion-capture action figure, and a reprise of the dwarfed creature from "Pola X." But who is this actor exactly and who are his clients? There are no cameras around to record his actions so for whom is he acting? And why is there an ape in the movie?

Days after this lightly thought-provoking, and beautifully photographed non-linear film was projected I found people still pondering its meaning. Was it meant to be a cinematic treatise on filmmaking itself, or was it a deeper exploration of our stages of life through the eons, with metaphors for reincarnation and karma and the relationships that are really important to get right. I enjoyed it and was glad to see it included in Competition.

I am looking at the schedule of the rerun of the twenty-two Competition films to be shown this Sunday, May 27, and I gasp as I notice for the first time the line-up of the 4 films to be shown in Debussy Hall. Debussy is the second largest theater after the Lumiere and they usually show films for which they expect larger audiences there. I think this line-up was established before the start of the festival, but it meant nothing to me when I arrived two weeks ago. 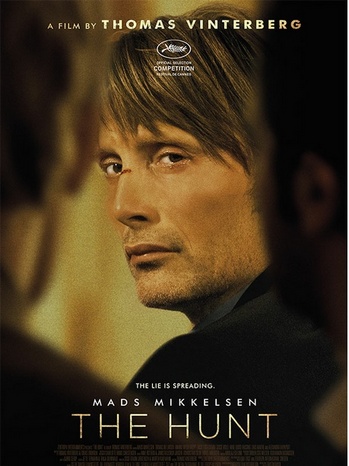 Now I see the films are: Ken Loach's "The Angel's Share," Leos Carax's "Holy Motors," Michael Haneke's, " Amour," and Thomas Vinterberg's "The Hunt" ("Jagten"). Were these the four the festival expected to have the largest following? Could this be a tip to the names that will be called later today at the Closing Ceremony? Or is this line-up coincidental and meaningless? Actually the festival has no way of knowing who the jury will vote for. Each year the jury brings its own personalities, but the festival gives them some sort of direction. One of the directives, as I understand it, is not to give one film or one country too many prizes, but spread them around.

Certainly the Danish filmmaker Vinterberg's film has received high critical praise during the festival. I am catching up with his film later today, but its plot is reminiscent of "Children's Hour" when a teacher is falsely accused of sexual abuse against a student. I hear that Mads Mikkelsen's performance is masterful.

But I don't want to speculate too wildly because actually there is a very good line-up of films in Competition, and the outcome is anyone's guess. For instance Alain Resnais is 90 years old and his film (with the English translation) "You Haven't Seen Anything Yet," has a stellar cast of veteran French actors like Michel Piccoli, Sabine Azema, Lambert Wilson, Anne Consigny, Mathieu Amalric, Hippolyte Girardot among them. They are called back to the villa of a deceased director to hear the reading of his will and asked their opinion on the reprise of his play of Eurydice. During the showing of the film of the new production they begin to reenact their previous roles. It is an interesting film, but not given high odds of winning the Golden Palm. So who knows?