It's with pleasure and excitement that I welcome Tom Shales, a good friend, as a blogger on this site. Tom, the nation's best-known television critic, won the Pulitzer Prize while writing for The Washington Post from 1972 to 2010. His blog will focus on TV and whatever else he feels moved to write about. -- RE 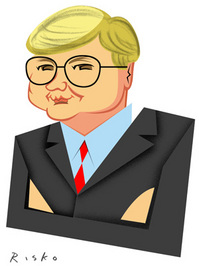 Apparently a new bylaw at "Saturday Night Live," which began its 38th season this weekend, is "The worse the host, the more sketches in which he'll appear." So it was with big let-down Seth MacFarlane, multimillionaire comedy tycoon who hosted the season premiere. Once he arrived on the show's tiny (and, yes, "iconic") stage, he was punishingly omnipresent for the whole 90 minutes.

We can be grateful he didn't grab a cow bell and crash the musical act.

With the exception of MacFarlane - a man who has gone farther with less than perhaps even Tyler Perry -- the series seemed to be in tip-top ship-shape shape, especially considering that it begins a new year minus two of its greatest cast assets: Andy Samberg, off to make more movies, and the incomparably versatile Kristen Wiig, the funniest woman in television since Tina Fey. Or maybe since Gilda Radner. Or maybe since Carol Burnett. Or maybe since, dare we say it, Lucille Ball?

Or Gale Storm. No, I didn't mean that; just a test-mention for Baby Boomers.

In a touching moment during the obligatory "cold open" (prior to the credits), Fred Armisen handed the Barack Obama baton off to Jay Pharoah, who's shown a real gift for impressions since joining the cast two seasons ago. Pharoah did a great job as Obama and since he's likely to improve after his first outing, regular appearances are something to look forward to.

Likewise Jason Sudeikis, who was suitably bumblesome as Mitt Romney, making a ham-handed personal appearance and metaphorically crashing into as many trees as George of the Jungle. Obama conceded in the sketch that he had disappointed his followers but said he wasn't worried about re-election because his campaign had one great secret weapon -- Guess Who.

Then came MacFarlane's self-indulgent and self-celebratory monologue, some lame musical material in which he lamented in less-than-hilarious terms that the many cartoon voices he has created (for "Family Guy" and other smutty shows) keep popping into his brain. You don't say! This bit was probably best appreciated -- well, by MacFarlane himself, but after that, by persons under 20, and the farther, the better. Kids into potty humor. MacFarlane was fastidious about mentioning his credits in the monologue, including the summer movie comedy "Ted," about a foul-mouthed stuffed bear.

New or promoted cast members include Vanessa Bayer, who leans toward daffy types; Nassim Pedrad, who leans toward a more diverse range of characters; a cute chubby girl named Aidy Bryant, who was only glimpsed on the premiere and got to do very little leaning; a dopey-looking guy named Tim Robinson who definitely has possibilities; plus Kate McKinnon, blonde (these terms used for visual identification purposes only) and Cecily Strong, brunette. Pedrad was funny in a sketch about two people (one of them, of course, the inescapable MacFarlane) making new-style banter in a restaurant, every sentence beginning "I'm all -" this or "I'm like" that. When the cold open is the best sketch of the night, the show is not on very solid ground -- and this was the case Saturday -- and yet the overall level of the sketches and jokes was, um, not low. It was more like a rousing "satisfactory" or a passionate "adequate." Anyway, the first show of the season is never the best show of the season (so why review it? Tradition!).

The relative lack of political satire only weeks before the election, however, was a bad sign -- a sign that, among other things, executive producer Lorne Michaels is saving the hot political stuff for the show's pre-election Thursday-night prime-time specials, another desperation programming move by the master of that genre, NBC. "SNL" in prime time is supposed to bolster very weak hold-over sitcoms from last season. It's a heavy and essentially thankless burden to bear.

One major disappointment this season is that Seth Meyers, he of the demonic grin and shouted delivery, still has domain over "Weekend Update," theoretically the show's best reason for hanging in there after midnight. Michaels must have figured it was better to stay with a proven commodity (the studio audiences seem to like him) than try something new, so Meyers has returned for all or part of the season. Even "Update" included an obnoxious appearance from MacFarlane, who was shunted in to do a mean-spirited impression of Olympic swimming champ Ryan Lochte, depicted as a simple-minded stooge. This is a man that should be picked on, and by a smug twerp like MacFarlane? There's no justice, no. MacFarlane also starred in a funny sketch about a stuttering Army drill instructor, and as the teacher of a class in puppetry (in a deftly offbeat sketch) and a salesman at a hat store called "Lids." That last one was hugely brightened by an appearance from the lovably nutty Korean superstar Psy (IS that his name?) whose dancing style is triumphantly and infectiously loopy. And spreading like West Nile Virus thanks to the coolest network in cable, M-Net ("where Asian Pop lives").

Returning performers like the ever-reliable Kenan Thompson, the ever-improving Bobby Moynihan and the hard-to-peg Taran Killam were all in there pitching, or catching, or both. The show runs like the proverbial well-lubed machine; in spite of the tired naysayers who deride its not being essential viewing any more, or some other such baloney, it never stoops to terrible. But it also has to be conceded that it doesn't often stretch to brilliancy, either. When it does, though, then waiting around through lukewarm sketches proves worth it.

MacFarlane's outing will probably prove a popular one with the young demographic to which even "SNL" largely kowtows. We can hope the comedy will become more adult as the election draws nearer. Michaels promised (or came close), during a brief chat on Friday, that a mock soap-opera called "The Californians," which debuted last season, will be back again this year, despite the absence of Wiig, one of its cast members. Armisen, still happily around, is probably more important to that one anyway. In the traditional good-nights at the close, MacFarlane thanked the usual suspects with one odd exception; everybody thanks Lorne Michaels, but MacFarlane didn't mention him. Maybe he's jealous of anyone more talented (and richer). But that takes in a lot of territory. Oh you're thinking maybe I'm jealous too -- of MacFarlane? Ridiculous! True, but ridiculous.