There was the tense sensation that actual news might break out at any moment -- but we knew it would be just as well if it didn't. The Second Inaugural of President Barack Obama, which occupied most of Monday on broadcast networks and cable channels, was actually rather compelling for an event which had little reason to exist.

In fact, the President had already taken the oath the day before; he was president again and didn't need any twenty-one gun salutes to prove it. But some traditions, even seemingly wasteful or pointless ones, persist. "I Love a Parade" is now a very old song, but apparently parades still have their fans. Include me out.

The major purpose of such an occasion as the big party seems obvious: to thank those who donated money to Obama's campaign, rewarding them with an excuse to make merry and boisterous, and solemn and sober, in the nation's magnificently telegenic capital. Part of the tradition, of course, is for TV reporters to squander the visual splendor by trying to upstage it with words, words and, just for the hell of it, more words.

Spirits are so high at times like these that even an easily peeved viewer is inclined to be forgiving. Reporters and anchors want to say something to enhance the experience somehow, and the observations observed at this year's big affair ranged from citing resemblances between Obama's Second Inaugural and Abraham Lincoln's to the fact that guests who ate everything served them at the celebratory luncheon consumed no fewer than 3,000 calories.

Yes, it was a day for fat cats to get even fatter.

Obama, naturally enough, handled his role with finesse, although he didn't seem to be aiming at any kind of emotional impact. That remained mainly for spectators to supply, even if we heard about it second-hand; a correspondent on one of the networks said she saw a rapt spectator listening to the President's speech with "tears literally running down her face." Literally, mind you! No flimsy figurative tears on a day like this! 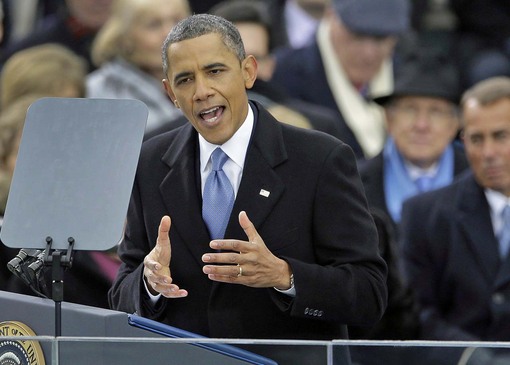 Commentators rushed in at the conclusion of Obama's brilliantly brief speech to analyze its significance and import, if any. He was calling for a less divisive, more harmonious government, they said. But they said that four years ago when Obama was inaugurated for the first time. To me, listening between the lines as usual, it sounded like Obama was really saying, "Come on, you guys, give me a break! I can't do it all myself." Democrats and Republicans will have to pitch in and help out during this second term, he seemed to say, because frankly, he's pooped.

There are many other ways to interpret the speech, of course. It could be seen as, depending on your political position, Obama's personal, refreshing or scarifying, Declaration of Independence. He's got the job for four more years, he doesn't have to worry about running for re-election, and he therefore doesn't have to tip-toe around the fragile feelings of, for one, obstreperous John Boehner, a nearly Dickensian villain who seems blindly devoted to preventing any kind of progress from happening in a Democratic administration. Especially, for whatever dark reasons, this Democrat's.

Obama spoke with what seemed heightened candor about securing equal opportunities for men and women, a venerable topic by now, but also between the straight and the gay, words which we're still unaccustomed to hearing from a president. He even mentioned climate change and global warming, perhaps partly because many observers noted these arguably monumental environmental issues didn't come up once during Obama's presidential debates with what's-his-name, that smiley-faced billionaire who ran against him.

Of course the speech contained de rigeur nods to history and social significance. This was, after all, the day set aside for the nation to honor the memory of Dr. Martin Luther King Jr. Obama addressed this with dignity and a degree of eloquence although, again, without much tangible emotional investment. It's just not his style. On those rare occasions when, as President, he has shown emotion, the emotion has usually been anger, as when he impressively defended UN ambassador Susan E. Rice against a Republican assault.

That was a kind of "you want a fight? I'll give you a fight" moment that was electrifying to witness.

And lest we seem to be saying Obama is Mr. Icewater Veins, it must be acknowledged that there've been times when he was clearly and openly touched by something that happened or was said. It's just not his nature to be overly, or even moderately, demonstrative, maybe in part because he doesn't want to be known as a cry-baby the way arch-nemesis Boehner is (if their mutual animosity keeps up, they could turn into Superman and Lex Luthor, or Sherlock Holmes and Moriarty). I think that at the Second Inaugural, Obama may have erred on the side of stoicism, but many people would find that unerring. They'd much rather have a straight-faced president than, say, a nut like Nixon bouncing off the walls. 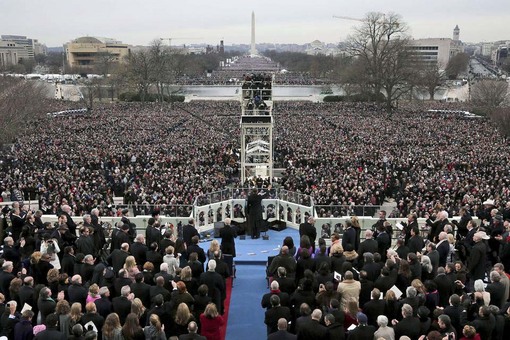 Diane Sawyer and the gang at ABC News revealed a moving moment to viewers that occurred just after the speech ended. Before leaving the platform constructed for the swearing-in and poem-reading and the other stuff, Obama stopped, turned back, and looked out at the huge crowd assembled at the Capitol. Turned back -- and just took it all in for a moment.

One never knows, but it seems unlikely anyone will suggest Sawyer acted "drunk" on this occasion, as one or two commentators claimed she did after her coverage (with George Stephanopoulos) of previous big-time events. She does have a peculiar cadence sometimes, plus a sense that she starts a sentence having no clear idea how it's going to end -- or if it ever will. It's hard to know if this is some affectation calculated to be compelling or if it's just the borderline wacky way she talks. Her emphasis and syntax can seem strangely erratic; over a wide shot of the room full of decorated tables and chairs, as the guests were filing in and taking their seats, Sawyer told viewers, "This is the traditional -- luncheon?!?"

The traditional -- "Luncheon?!?" What was she -- implying?!? Was she being in some way sardonic, as if to say calling this lavish affair a "luncheon" was reckless understatement? Or did she even know she had made "luncheon" into a stupefied one-word -- question?!? We may never -- know?!? Some reporters did Herculean jobs of scavenging for news amidst the hoopla and folderol. Martha Raddatz, looking mercifully at ease for a change, was making pleasant partygoer palaver with Secretary of Defense Leon Panetta when she suddenly asked him, "How do you see us using drones in the future?" Panetta looked a bit surprised but took the question in stride. Raddatz asked a few more substantive questions in a sort of impromptu follow-up to a major sit-down they had on Jan. 18. 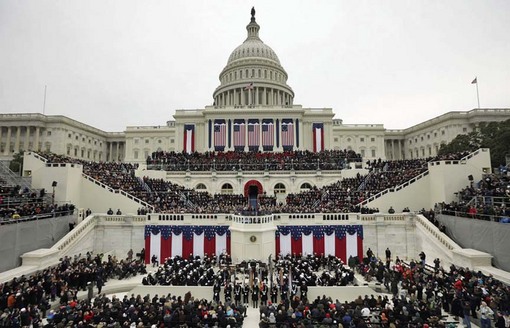 The ceremonial aspects went off smoothly enough, with no gaffes by Chief Justice John Roberts to equal his bumbling around with the Oath of Office four years ago. Beyonce sang a bombastic version of the National Anthem, but then "bombs" are mentioned in it, aren't they? More militaristic -- and arguably growing more inappropriate with each passing year -- is the "Battle Hymn of the Republic," sung by a big choir and band. What exactly is the charm of this overblown antique that keeps it such an inescapable part of the pomp repertoire? What?

Does our lovely republic really need a "battle hymn"? Do we expect Jesus to lead the troops when the next war comes along? Before you rush to the keyboard and fire off a furious note of rebuke for such impudence, think about the lyrics to sway-backed old war-horse -- "God is marching on." God marches? Where -- at the head of the U.S. Army? Is this really sound 21st-Century thinking?

"In the beauty of the lilies, Christ was born across the sea, with a glory in his bosom that transfigures you and me." Now wait a minute. Do lilies really bloom in that arid land where Christ was born? No irreverence is meant toward any religion whatsoever -- only toward that song. There are so many less abrasive, less pretentious and less pious alternatives. Besides, if you can't get the Mormon Tabernacle Choir to come in and sing it, then the heck with it.

One more tiny misgiving about the Second Inaugural and its panoply of pomp: Am I the only one who's a tad suspicious of Lamar Alexander's opening remarks, especially the quote from "Roots" author Alex Haley (not around to defend himself) and his alleged six words to live by: "Find the good and praise it." Was there some disingenuous subterfuge going on there? Was Alexander saying in effect that when it is difficult to find "the good" in an individual (such as Obama?), keep looking and maybe it'll pop out somehow?

Frankly, I hope that Alexander was completely on-the-level and had no sneaky agenda. But I wouldn't put money on it. Not a trillion-dollar-coin, and not a quarter, either. They still make quarters, don't they?