“You’re the Worst” Remains One of TV’s Best Shows

The story of Jimmy Shive-Overly (Chris Geere) and Gretchen Cutler (Aya Cash) continues tomorrow night, August 31st, on FXX as we welcome back one of television’s smartest, funniest and all-around best comedies, “You’re the Worst.” Created by Stephen Falk, “YTW” transcended its solid first season to become something much deeper and more impressive in season two, a year that focused not just on the unique blend of cynicism and devotion common in modern twentysomethings but expanded its themes to present one of the most realistic and moving depictions of depression in television history. Instead of merely being satisfied with the “young people behaving badly” which often defines the genre—and which this cast still does very well—the writers of “You’re the Worst” took creative risks, making the characters feel more genuine and emotionally resonant. The second season of “You’re the Worst” was alternately laugh-out-loud hysterical and tear-producing emotional, without ever feeling false in the former or manipulative in the latter. Everything here comes from the characters, well-defined and brilliantly portrayed. It’s a tough act to follow. Where do they go in season three? 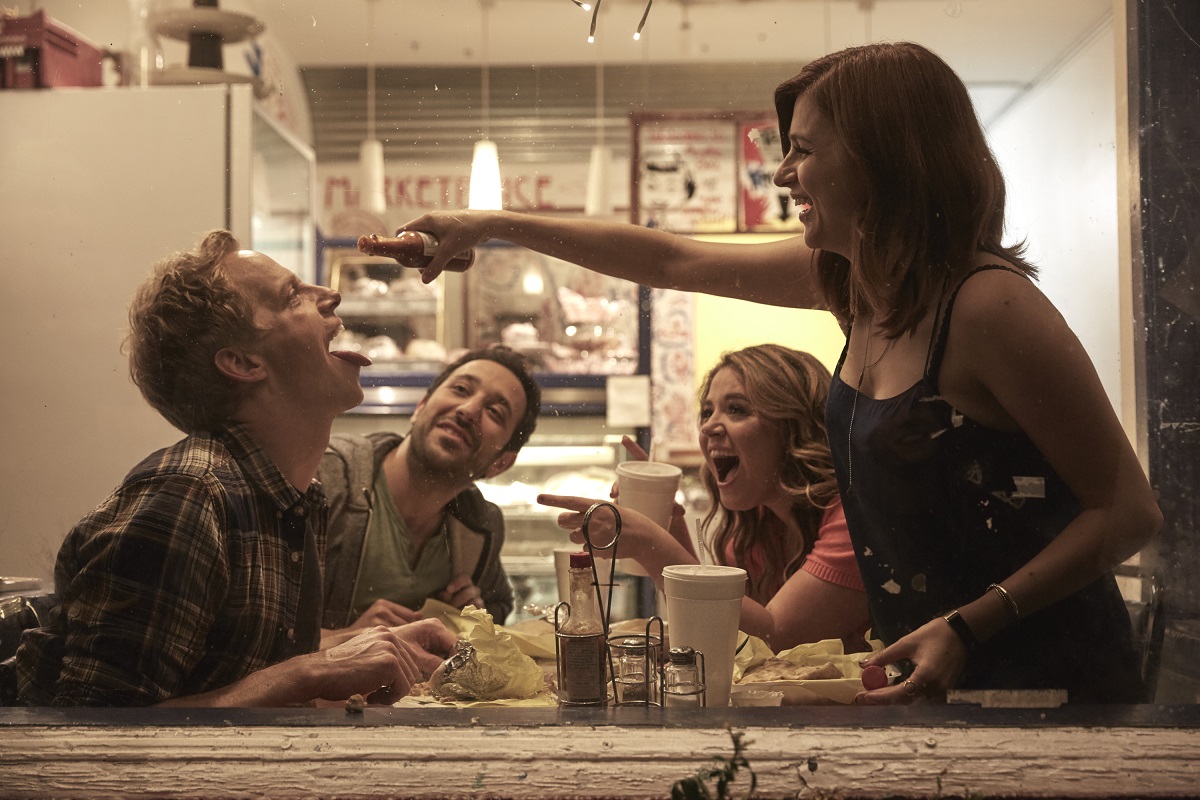 Narratively, the key development at the end of season two was that Jimmy finally told Gretchen that he loves her, although he denies being sober enough in that moment for it to matter at the start of season three. From the beginning, Jimmy has been one of those young men who claims that he doesn’t believe in love and will never express it, and yet he clearly has fallen deeply in love with Gretchen. The start of season three is about Jimmy and Gretchen learning more about each other—those little quirks and background details that often come after a couple falls in love. For example, Gretchen doesn’t wash her legs in the shower (which, yes, is greeted quizzically by Jimmy) and has never eaten a blueberry. She even went to Bible Camp, and speaks Spanish. Meanwhile, Edgar (Desmin Borges) faces issues of impotence related to new medication while Lindsay (Kether Donohue) stares directly into the face of domesticity and, well, panics a bit.

All of the people are, like so many of us, trying to figure out who they are both as individuals and as a couple. Can Lindsay still be herself and meet the societal expectations of a wife and partner to her husband, whom she’s only really with because of a surprise pregnancy? Can Edgar keep Dorothy (Collette Wolfe) happy and himself stable at the same time? Ultimately, this is the grand, brilliant theme of “You’re the Worst”—these people are trying to discern how much of themselves they have to give up to be a partner instead of just a solo act, and they’re the kind of people overly protective of their flaws and hesitant to change the patterns of their lives. Like so many people, they’re afraid. Gretchen was afraid all of last year that Jimmy would leave if he knew about the depths of her depression. This year, she’s forced into therapy with hysterical and insightful results (with a great guest turn from Samira Wiley of “Orange is the New Black”). And I expect that Jimmy will have to deal with some identity issues this season, especially after the action of the final moments of the second episode sent for review.

Some have suggested recently that this current phase of the “Peak TV Era” is being defined more by the risk-taking comedies than the dramas of the mid-‘10s. At first, I dismissed the idea. But then I thought a little deeper about the shows that have really surprised and impressed me lately and when you take out the limited series like “The Night Of” and “The People vs. OJ Simpson,” many of them are comedies, including HBO’s “Veep” and “Silicon Valley,” ABC’s “Black-ish,” Netflix’s “Bojack Horseman” & “Master of None” and FX’s upcoming “Atlanta.” These are shows taking creative risks and finding something deeper about the human experience than the anti-hero arc we’ve seen so often in drama. And compared to those comedies, “You’re the Worst” is one of the best.