“The Tick” Returns to a New World on Amazon

When the adaptation of the hit comic book “The Tick” became something of a cult phenomenon on FOX in the early ‘00s, with Patrick Warburton in the lead role, we were in a very different era of not only superheroes but comedies. Superhero culture was nowhere near the entertainment machine that it is today, and television was not often as self-referential or quirky as “The Tick.” “Friends” was still on the air and we weren’t that far off “Batman and Robin.” Fifteen years later, meta-comedy is a brand and superheroes are everywhere. The biggest problem for “The Tick” is how often superhero culture mocks itself, whether it’s in more serious fare like “Super” or in blockbusters like “Guardians of the Galaxy.” So a TV show that hinges on how anyone who puts on tights and fights crime (or creates it) is probably a little crazy doesn’t feel as fresh as it once did. There are elements of Amazon’s reboot that work—particularly Peter Serafinowicz’s performance, nicely filling the rather big shoes of Warburton—but there’s something just a tad bit off in this “Tick.” The show is fine, and works as a series of moments, but I’m not sure if it’s the familiarity or the execution that stops it from being more than satisfactory.

Arthur (Griffin Newman) is a lonely accountant, the kind of guy kicked around at the office and left relatively by himself in the rest of the world. He does have a sister named Dot (Valorie Curry) who supports him, but she worries that he’s going to have another mental breakdown. And it looks like he may have when he starts seeing a giant blue superhero named The Tick, played with sarcastic aplomb by Serafinowicz. The Tick is the kind of egocentric moron that Troy McClure would play in a feature film, a fellow who’s more innocent than malevolent, and often fights crime by accident as much as on purpose. He balances stupidity with fearlessness, and both can help him save the day.

The Tick comes to Arthur because the latter is the only person who believes that the vanquished supervillain named The Terror (Jackie Earle Haley), with whom Arthur has a dark history, is still alive. While the danger of The Terror lurks in the background, we’re also introduced to Ms. Lint (Yara Martinez), a one-eyed baddie who can control static electricity. Arthur avoids being drawn into the world of superheroes but his continual encounters with The Tick lead him to believe he’s got a role to play if The Terror and Ms. Lint are going to be stopped. 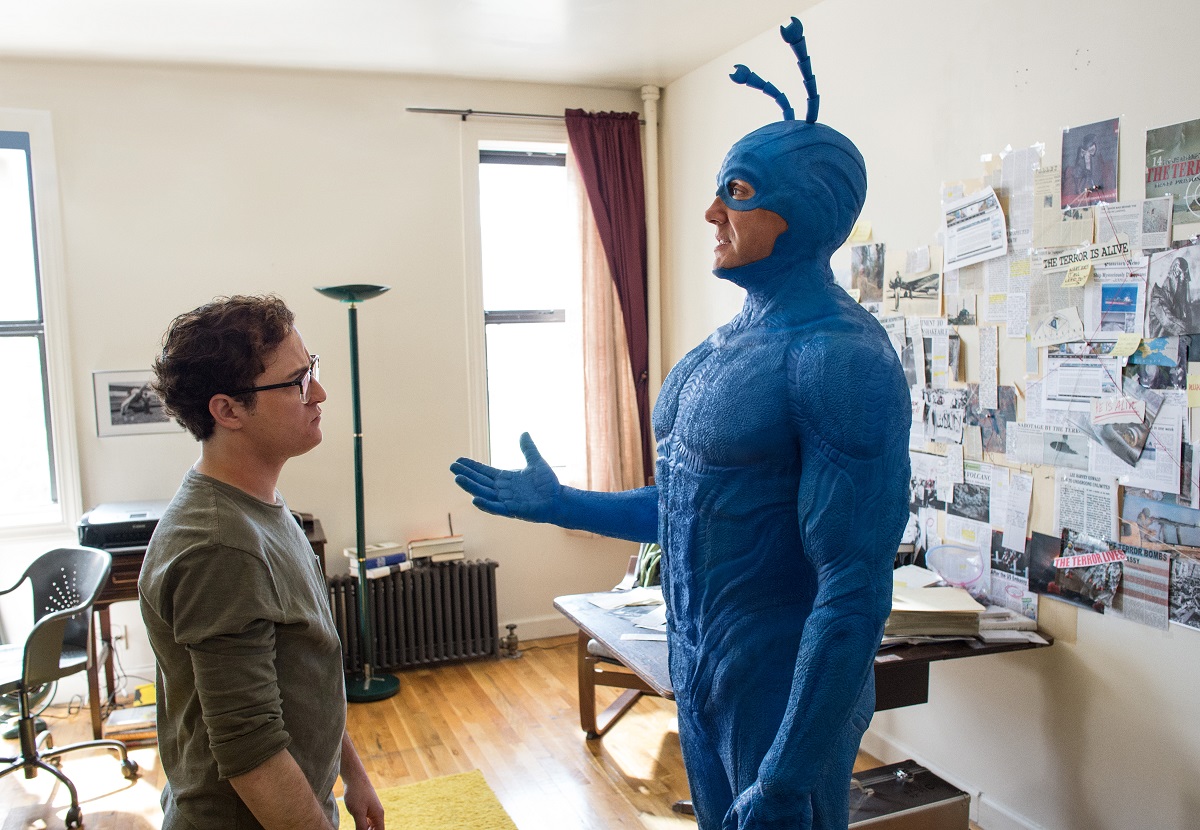 Of course, most of this is played for laughs in that broad, exaggerated way that works half as satire and half as actual superhero story. Think of “Mystery Men” or, in the show’s less successful beats, NBC’s failed “Powerless.” Ben Edlund, who created the character and both previous TV iterations (there was an animated one before the Warburton one), is behind this reboot as well, which gives the show a sense of creative legitimacy. It’s not merely back to play off nostalgia or the trend of superhero films and TV shows. Edlund clearly adores his so-dumb-he’s-heroic creation, and the best elements of the show are when he and Serafinowicz are very clearly on the same page. I also like how often “The Tick” is staged in the real world—The Tick comes to Arthur’s father’s birthday party and fights often happen in lackluster, everyday locations. In a sense, “The Tick” recognizes that superheroes are literally everywhere now.

“The Tick” is never boring, and viewers young enough to not remember the other iterations may find it fresher than I did. I just wanted something a bit sharper and funnier, something that felt as new as the original live-action TV show. Although maybe that’s impossible when superheroes are involved in 2017.