The Audacious "Something Wild" Comes to Criterion Blu-ray

When Jack Garfein's “Something Wild” was released in 1961, it was mostly savaged by critics, roundly ignored by audiences and quickly slipped into obscurity. It didn’t turn up in revival houses, mentions in reference books were scarce at best and if the title did happen to come up somehow, most people probably mistook it for the 1986 Jonathan Demme movie of the same name.

Now, in its highest-profile move since its original release (and probably even higher than that), “Something Wild” has been accorded the honor of joining the Criterion Collection with a special-edition Blu-ray featuring a new transfer and a slew of bonus features offering additional background to the film and its unusual history. As a result, a new generation of viewers will have the opportunity to see it for themselves and realize what fans of the film have known for years—not only was “Something Wild” one of the most audacious and formally radical American movies of the 1960s, it still feels startlingly ahead of its time even more than a half-century since it first came out.

That very audaciousness comes right at the start with an extended opening sequence that is striking both for its content and the manner in which it has been presented. College student Mary Ann Robinson (Carroll Baker) is walking to her home in the Bronx one night when she is accosted and brutally raped by an attacker whose face we never see. When she wakes up afterwards, she does not respond in any of the ways that we are conditioned to believe that someone in that position should react—she doesn’t scream or cry or report the crime to the police. Instead, she quietly goes to the home that she shares with her status-conscious mother (Mildred Dunnock) and distant stepfather (Charles Watts)—sneaking in as though she were a criminal herself in the hopes of avoiding detection—takes a long bath, methodically cuts up the clothing she was wearing into tiny pieces, flushes them down the toilet and crawls into bed. The next morning, she wakes up, gets dressed and heads off to school. At no point, however, does she utter a single word about what happened to her to anyone.

For audiences in 1961, this sequence—which runs maybe 15 minutes or so—must have been like a bomb going off. For starters, any forthright depiction of sexual assault in an American film was a rarity indeed and to kick a movie off with such a scene—before viewers have had a chance to get their bearings or be introduced to the characters—was pretty much unheard of. Although the presentation of the attack is not as graphic as, say, Paul Verheoven's “Elle,” it offers a series of brief but indelible images—a pedant of a cross cast into the dirt, a rock poking painfully into her skin—that stress the violence and utter violation of the moment. As for her refusal to react in the expected manner or to even tell anyone about what happened, it is easy today to recognize that Mary Ann has been deeply traumatized by the attack, a notion that simply wasn’t on the radar of many people back then and which demonstrates just how ahead of its time the film really was. 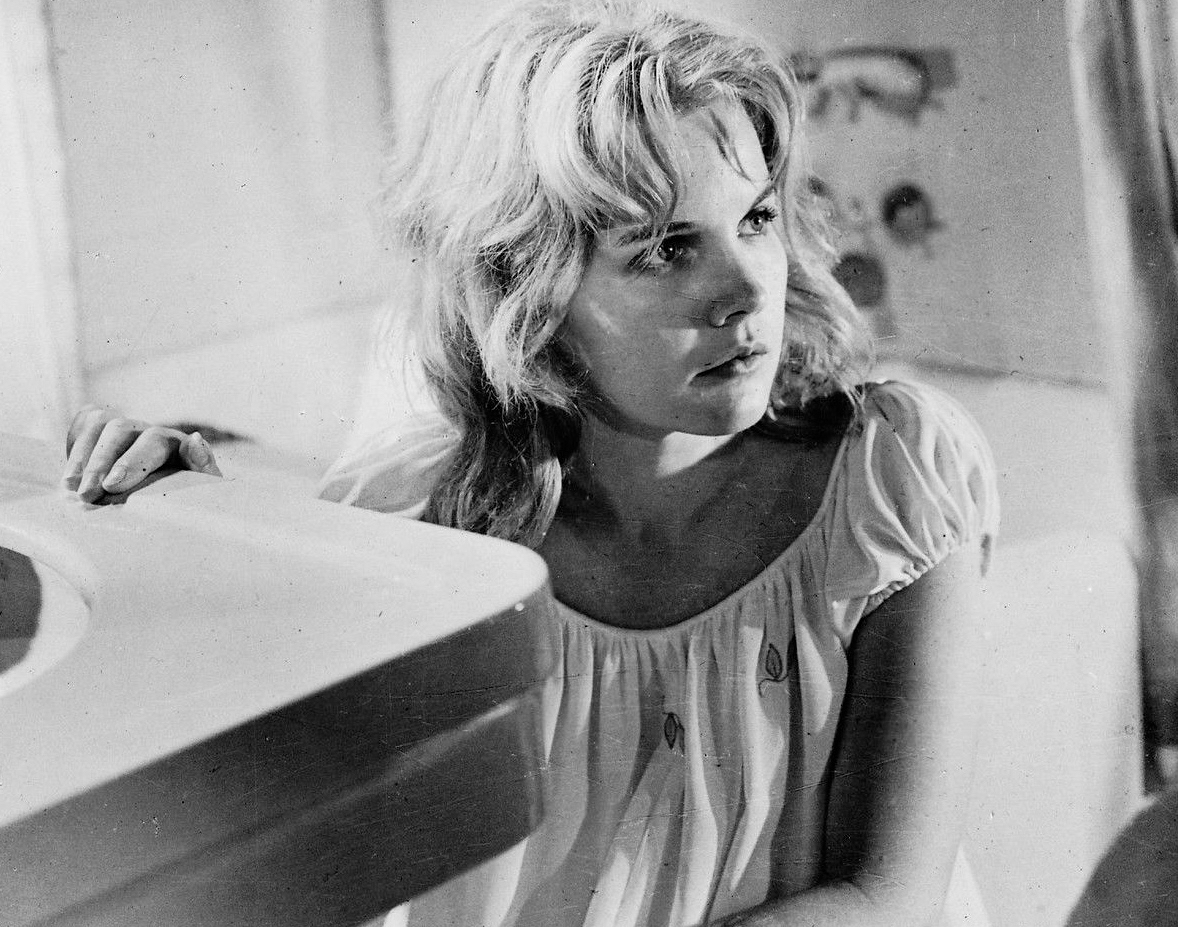 Although we have not gotten a chance to know Mary Ann at all before her assault, it is soon abundantly clear that she has been changed in some key fundamental way as the result of it. She tries to go back to school that next morning but is overwhelmed by the mobs of people cramming into the subway—any one of whom could theoretically be her rapist—and she winds up fainting on the platform. A cop escorts her home but her mother is more appalled by the fact that her neighbors saw her getting out of a police car than concerned about the health of her daughter. Later, her mother starts talking aimlessly about how respectable the neighborhood used to be and how safe the streets were before “the dirty people” started moving in. “Everyone is dirty,” Mary Ann, who has probably never talked back to anyone before in her life and knows exactly how dangerous the streets really are, coldly snaps in return. One day, again without offering a word of explanation to anyone, she leaves her house, drops her school books on a park bench and just starts walking away, eventually winding up on the Lower East Side, where she rents a crummy room and gets a low-level job as a cashier at a five-and-dime store.

In an ordinary movie, this abrupt shift might lead to a triumphant story showing Mary Ann finding the strength to persevere. But as you have probably guessed by now, this is not an ordinary movie. Even in her new existence, Mary Ann is unable to find any sense of peace—her landlord (Martin Kosleck, an actor probably best remembered for the number of Nazi roles that he played throughout his career), her neighbor (Jean Stapleton in an early role) is kind of obnoxious and her coworkers (including future sitcom veteran Doris Roberts) mistake her aloofness for being unfriendly and treat her cruelly in response. Eventually, Mary Ann finds herself at the end of her rope and makes her way to the Manhattan Bridge, intending to jump and end it all. Just before she makes the leap, however, she is literally pulled back from the brink by Mike (Ralph Meeker), a mechanic who just happened to be passing by. Recognizing her distress, he takes her home to his basement apartment and offers to let her rest there for as long as she wants. 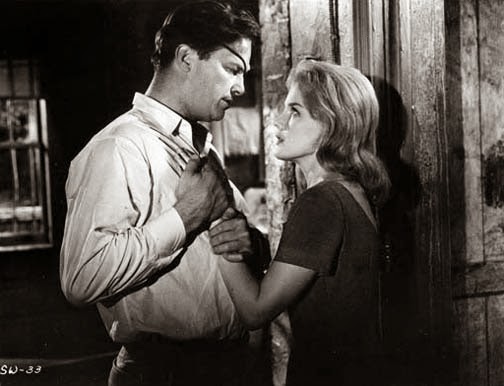 Once again, what seems like a setup for a typical Hollywood ending takes another dark turn. After a few awkwardly endearing stabs at domesticity, Mike goes out one night and when he returns later on, he drunkenly tries to attack Mary Ann himself. This time, however, she fights back and kicks him in the eye before he passes out on the floor. When he wakes up the next morning, he has no memory of what happened—he assumes he got into a bar fight of some kind—but the injury is severe enough that he winds up losing the eye. However, he now refuses to let Mary Ann leave the apartment—he keeps telling her that he likes how she looks there and when she is especially insistent, he reminds her that she has no right to complain because he saved her life and whines about how “you are my last chance.” How the story resolves itself from this point is something I leave for you to discover. But suffice it to say, "Something Wild" ventures into dramatic areas as unexpected as everything that preceded it.

The film was directed by Jack Garfein, who had been a member of the Actor’s Studio and directed a number of critically acclaimed plays on Broadway before branching off, first into television and later into film with his controversial 1957 screen debut “The Strange One.” For his second (and last) feature film, he chose to adapt the novel Mary Ann by author Alex Karmel (with whom he would co-write the screenplay) as a vehicle for his wife, fellow Actor’s Studio member Carroll Baker. I have not seen “The Strange One” but based solely on his work here, he had a genuine gift for filmmaking that goes far beyond his willingness to ignore the usual Hollywood conventions. Like a lot of theater directors who make the leap to cinema, he knows how to work with actors. But unlike a lot of them, he knows how to make a visually interesting one as well.

For the first half of the film, he shot on location in New York City—a rarity at the time—a decision that gives a documentary feel that makes the darker moments seem all the more harsh and disturbing, because they take place in easily recognizable areas and show how even the most benign of areas can take on a sinister patina in a traumatized mind. As for the second half, it is set almost entirely on a set representing Mike’s basement apartment but it is no less visually interesting thanks to the endlessly inventive work of Eugen Schufftan, the German-born cinematographer who helped develop a special effects process deployed by Fritz Lang for “Metropolis” and would win the Oscar for his work on “The Hustler.” Garfein also made expert use of the offerings from a couple of other surprisingly high-level contributors—a striking live-action title sequence created by the legendary Saul Bass and a powerful score from the celebrated composer Aaron Copland, who would go on to reuse some themes for his later work “Music for a Great City.” 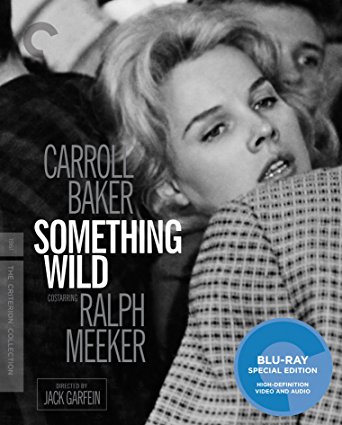 Baker was so committed to the part that she and Garfein helped to finance the production independently. The role of Mary Ann was meant to show the world that the woman who had become an international sex symbol playing the sexually-repressed Southern bride in the highly controversial screen version of Tennessee Williams’ “Baby Doll” was a serious actress as well. Her work here is simply incredible, especially in the way that she conveys so many complex and contradictory emotions and ideas, oftentimes without a word. It may not be easy to fully understand Mary Ann or why she does the things that she does but through Baker’s soulful work, we can at least empathize with her throughout. She also more than holds her own in the second half in her scenes up against Ralph Meeker (his character Mike Hammer's portrait of toxic masculinity gone awry is both frightening and pathetic) and she manages to even sell the odd and risky ending that could have easily fallen apart in the wrong hands. After watching her in this movie, it is impossible to not think for a moment about what might have happened with her career if more people had seen this film and realized what she could do. Instead, she spent a few more years playing the same old sexpot roles in junk like “The Carpetbaggers” (1964) and “Harlow” (1965) before departing for Europe, where she appeared in a number of weird Eurosleaze genre films, and eventually taking the lead in the bizarre cult classic “Andy Warhol’s Bad” (1977). It would only be in 1987, when she played the wife abandoned by Jack Nicholson in “Ironweed,” that her genuine gifts as an actress would finally be acknowledged.

I first heard about “Something Wild” a couple of decades ago when I read an interview with an actress who mentioned it as a personal favorite. I kept looking for it, but it was only a few years ago that it appeared on TCM and I was finally able to see it. Normally, when one waits a long time to see a movie, the actual film rarely if ever lives up to the expectations created during that wait. In this particular case, I was completely bowled over by every aspect of it and willingly became a member of the cult praising it. Watching it again on the new Blu-ray, which includes such bonus features as new interviews with Baker and Garfein, an interview with scholar Foster Hirsch about the history of the Actor’s Studio, audio excerpts from a 2014 master class on acting taught by Garfein and an essay by critic (and RogerEbert.com contributor) Sheila O’Malley, I was equally amazed to discover that it has lost none of its considerable power to provoke. “Something Wild” is one of the great and groundbreaking American films of the Sixties and hopefully this long-overdue Blu-ray will allow others to realize this at long last.

To order your own copy of "Something Wild" on Criterion Blu-ray, click here.