Netflix’s Admirable “Dear White People” is Rough Around the Edges

Justin Simien’s 2014 debut feature “Dear White People” was a film of the moment upon release. The college campus satire arrived at a time when conversations about identity politics were bubbling up to the mainstream, despite occurring in dorm rooms, households, and diverse social gatherings for time immemorial. “Dear White People” took a sledgehammer to the myth of a post-racial America and articulated the various positions of modern black identity, appropriately treating it as malleable as opposed to fixed or monolithic. Nevertheless, Simien’s film was a flawed enterprise; it essentially tried to incorporate too many complex ideas across too much space in too little time, rendering most of it a scattershot collection of moments rather than a cohesive gut-punch. Though its charged content necessarily communicated many “academic” concepts—systemic racism, white privilege, and microaggressions to name a few, which are now beginning to be broadly accepted as sociocultural truths by many non-ivory tower folks—Simien’s formal organization often belied these efforts and obscured the genuine points he was trying to make.

So, credit where it’s due: Simien admirably corrects this in his “Dear White People” Netflix series. He doesn’t just rework all of the film’s ideas into a different structural mode, allowing them to successfully breathe and develop across ten episodes, but also goes further than the source material, conveying the trials and tribulations people of color face in a predominantly white environment. Though Simien’s series ostensibly focuses on collegiate activism, it’s more about the fluid, performative nature of identity, and how it’s frequently complicated by new stimulus and personal experience. It argues that people naturally gravitate towards self-defining labels, and yet those labels are inherently unable to cover the breadth of a person’s individual identity, especially when the people in question are abused and targeted by society. 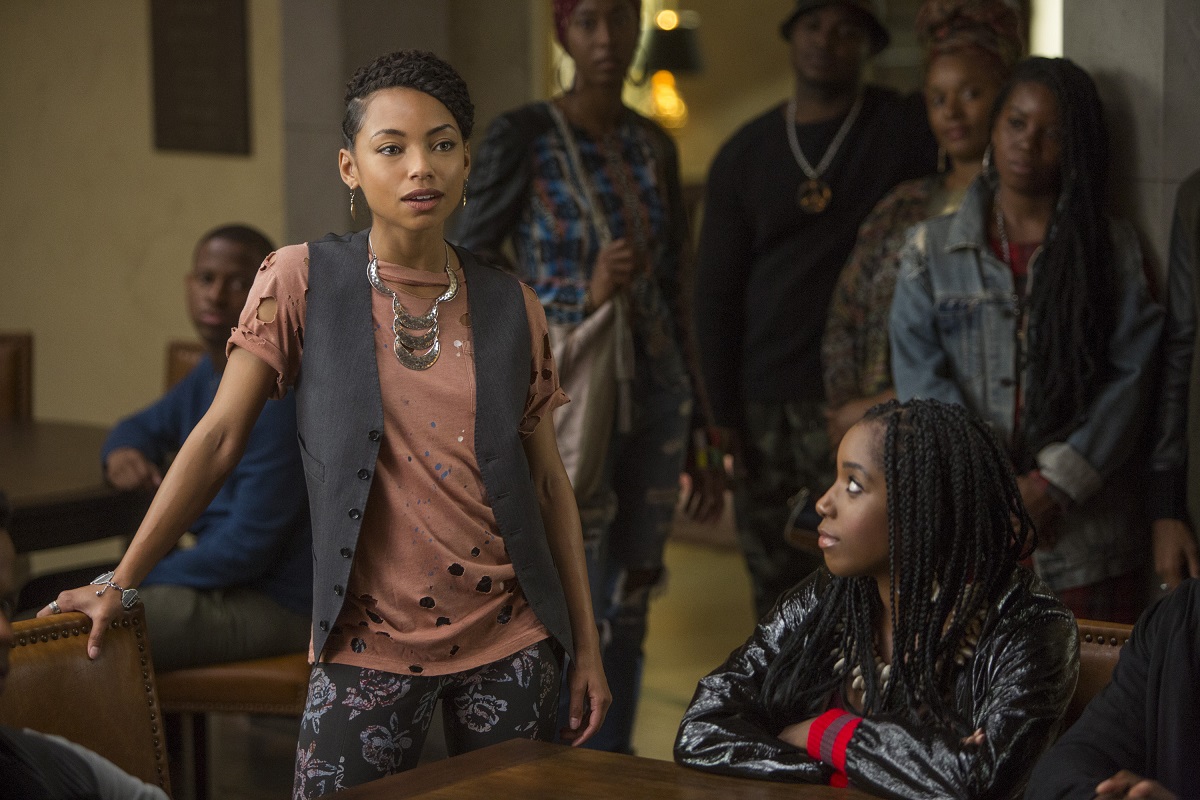 “Dear White People” follows an ensemble cast of characters who attend the fictional, prestigious Winchester University, an Ivy League-type institution, as they navigate the college’s social climate in the immediate aftermath of a “blackface” party on campus. Samantha White (Logan Browning) takes to her radio show (“Dear White People”) to express her righteous frustration at the students and the administration’s lack of understanding about POC concerns. She and her fellow Black Student Union comrades—her best friend Joelle (Ashley Blaine Featherson) and her partner-in-activism Reggie (Marque Richardson, reprising his role from the film) among others—are in the throes of protesting the campus’ ills, but, on the side, she’s dealing with her relationship with her white “Gosling-eyed” T.A. Gabe (John Patrick Amedori). Meanwhile, BMOC Troy Fairbanks (Brandon P. Bell, also reprising his film role) and social climber Coco Conners (Antoinette Robertson) struggle with maneuvering between the world of the elite and their own student communities. All the while, the nebbishy, semi-closeted journalist Lionel (DeRon Horton) reports the many ideological and literal battles as he’s trying to find a voice of his own.

Generally speaking, the series excels when it simply documents the characters’ lives while they negotiate different identity conflicts, embracing contradictions within perspectives and allowing them to be wrong in the moment as opposed to infallible mouthpieces. Simien and company take a panoramic view to Winchester life, an approach supported by the binge-conducive Netflix model; they follow a different character each episode as they contend with a campus-wide crisis or embark on their own adventure. The diffuse focus begets the writers’ ability to tackle multiple different topics and organically cultivate each character’s point of view, regularly leaving the season-long narrative in the background. In fact, the best thing about “Dear White People” is that it adopts the loose, varied feel of college life, filled with the highs, lows, fierce arguments, and ephemeral joys that come with it. College is often the only environment where extended intellectual gamesmanship can take place, and Simien illustrates that oftentimes the most serious skirmishes happen outside of the classroom—at keggers, dorm rooms, and clubhouses.
Advertisement 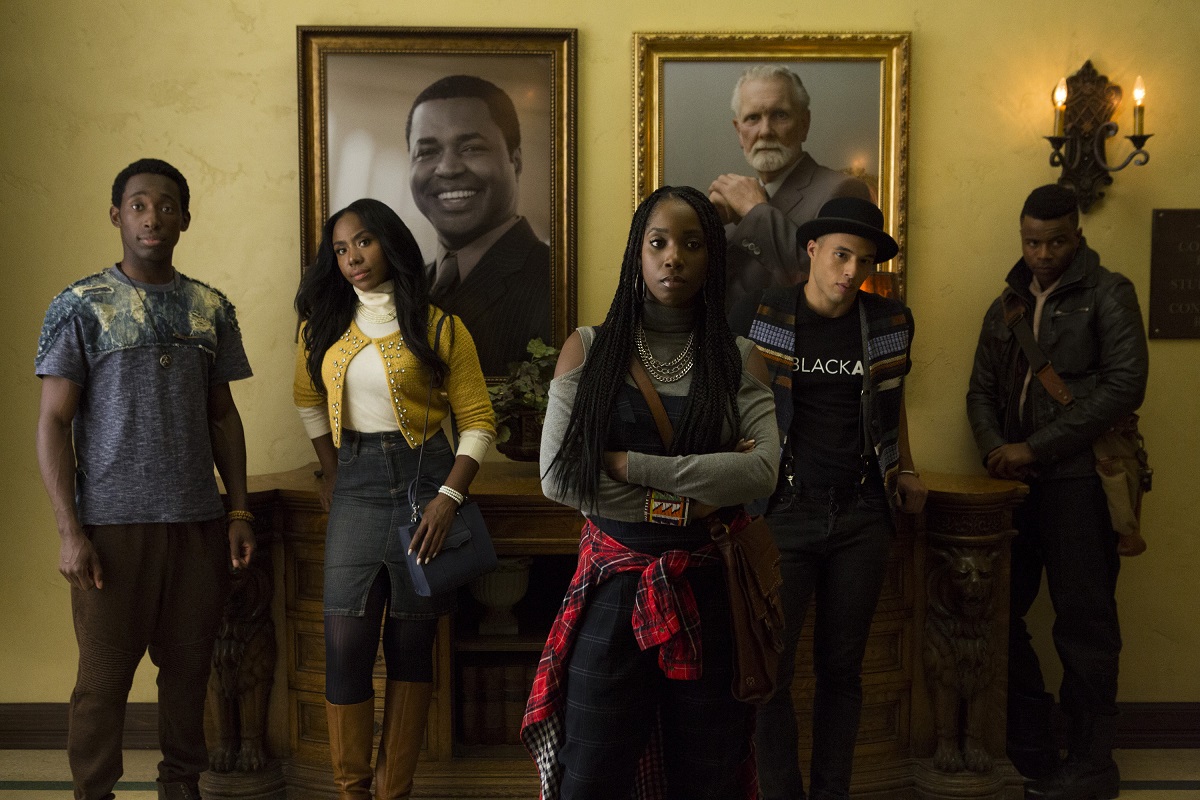 Despite the sweeping structure and empathetic character development, “Dear White People” feels too rough around the edges, and not in a good way. The performances range from excellent to middling, with certain actors noticeably carrying scenes as others in the frame struggle to keep up. The writing often feels forced, frequently employing buzzwords and catch-all phrases, albeit sometimes for satirical purposes, that scans like Millennial Speak written by non-Millennials. Moreover, the series’ didactic style repeatedly leaves the confrontational realm for more blunt territory, an unnecessary move considering the laid groundwork demands a tender touch rather than a heavy hand. Formally speaking, the show acquits itself well, with the Barry Jenkins-helmed episode standing high above the rest, but it mostly just gets out of the writing’s way rather than supporting or serving it. Finally, the macro narrative leaves something to be desired; it effectively starts and stops at the service of the character stories, but certain plot moves in the homestretch feel tacked on, and the seams in the writing begin to show as the loose ends are tied up.

It should be said that your willingness to forgive these flaws largely depends on your favorability towards Simien’s general approach. If you were a fan of the film, there’s a better-than-decent chance that you will be a fan of the series, especially if you vibe with it from the get-go. However, for those who were mixed on the original, the series frustrates, considering that it far surpasses the original in some respects and lags behind in others. To be fair, a show explicitly about identity will inevitably be thorny, just like any actual conversation about identity, but the series on the whole feels like something of a letdown. Though it’s playing in a compelling sandbox, its earnest tactics often scan as too safe considering the series’ stakes. “The paradox of education is that as one begins to become conscious one begins to examine the society in which he is being educated,” reads the James Baldwin quote that opens the series. “Dear White People” might be woke but that doesn’t mean it goes for the jugular.