The great “Outcast,” debuting this Friday, June 3rd on Cinemax, grapples with questions that religion and fiction have been asking for centuries. Why do we consider it so essential to define the forces of good and evil? Do we blame tragedy on the devil and good fortune on a higher power because we’re unable to accept the idea that either could be arbitrary? What exactly did innocent people do to “let the Devil in”? And how do we put true evil, especially when it shaped our childhood, behind us? Finally, how do we reconcile our feelings about what’s right and wrong in a world that doesn’t often dispense justice in appropriate ways?

Clearly, this is not simplistic genre programming. Adapted from his book by Robert Kirkman (“The Walking Dead”), and with film-caliber production values from top to bottom, “Outcast” is complex, daring television, reminiscent of shows like “Buffy the Vampire Slayer” and “The X-Files” in one beat (there’s even an “I Want to Believe” poster like the one Mulder had in the hero’s bedroom) and then echoing dramas about redemption and tragedy like Sundance’s “Rectify” in another. The team behind “Outcast” sometimes fumble a bit in terms of presentation and pacing, but that’s rare enough to be forgiven—and likely something that gets worked out over time. “Outcast” uses a structure often employed by horror fiction and filmmaking to examine the nature and purpose of evil, and its role in a world of genuinely good people. 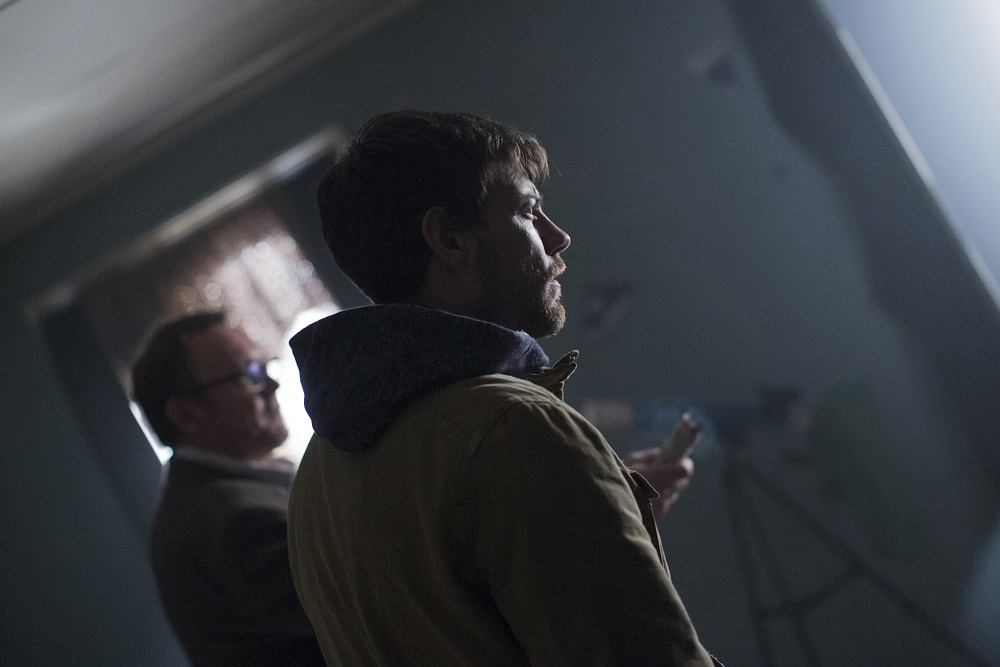 Its central good person is Kyle Barnes (the fantastic Patrick Fugit), a man who has seen the face of evil up close. Kyle is not like you and me. When he was a child, his abusive mother would lock him in a closet and beat him. And it happened overnight. She was fine one day; she was a monster the next. It turns out she was possessed by evil, and Kyle, who will later be referred to by another possessed man as “The Outcast,” had the power to drive the devil from his mother, leaving her in a vegetative state. Later, something similar happened with Kyle’s wife (Kate Lyn Sheil) and daughter, forcing him to be apart from his family, and turning him into a loner. Only his sister Megan (Wrenn Schimdt) supports Kyle, doing what she can to keep him sane.

In the premiere, deftly directed by Adam Wingard, Kyle joins forces with a local religious leader named Reverend Anderson (Philip Glenister). The good preacher, played with a perfect degree of world-weariness and religious fervor by the “Life on Mars” star, knows that the story of a local boy named Joshua is not a typical one. The devil is inside that boy, and Kyle has the power to free him. While Kyle and the Reverend essentially become a demon-fighting duo, Megan’s husband Mark (David Denman), a local policeman, notices himself that something is afoot at the Circle K, even if his superior (the fantastic Reg E. Cathey) tries to keep him in the dark.

“Outcast” is about two men who have lost their families to evil. While Anderson devoted his life to fighting the devil, Kyle has been dragged into his position—and the relationship occasionally reminds one of Buffy and Giles, albeit with much higher stakes. Much of the reason that “Outcast” works can be traced to the soulful performance by Fugit, who grounds the insanity of it all in something that feels real, and he’s balanced on that side of the ledger by great work from Schmidt, especially in later episodes when her dark past is revealed. The whole cast is strong, especially guest turns by Brent Spiner, Grace Zabriskie, Lee Tergesen, and others in later episodes.

The production values are also notable. Atticus Ross (“The Social Network”), Leopold Ross & Claudia Sarne contribute a score that is among the best on TV, setting a tone from the remarkable opening credits, which almost play like an overture for the world-skewing insanity to come each week. Cinematographer David Tattersall’s (“The Green Mile,” the “Star Wars” prequels) contributions can’t be underestimated too. The show has a visual language that is missing from too much TV—even that we call “Peak TV”—that both sets it apart and makes it feel part of a legacy.

“Outcast” isn’t telling a new story so much as telling an ancient one in a new way. When Anderson notes that the pain and heartache that Jesus relieves, he does so by suffering himself, it can really be considered the theme of both the adapted book and the show. How much suffering can one take when they're the only one who can take it? “Outcast” is a Cinemax drama about possession, sacrifice, cruelty and Jesus. In other words, it’s not your typical summer show, but it’s one you really shouldn’t miss.