Brad Anderson’s “Session 9”: The Little Leap From Comedy to Killing

Since its limited theatrical release in 2001, Brad Anderson’s “Session 9” has slowly gained prominence among film fans as one of the great American horror films of the 21st century. With an impressive ensemble cast, unnerving soundtrack and unforgettable use of location, the film not only set the stage for the modern renaissance in independent horror films, it also established Anderson as one of the better genre directors of our time. Subsequent films like “The Machinist” (2004) and “Transsiberian” (2008) have only cemented Anderson’s reputation as the heir apparent to Alfred Hitchcock in all on-screen matters related to guilt and paranoia. Now, thanks to a brand new Blu-ray release by the folks at Shout! Factory, people who slept on “Session 9” the first time around can finally experience it in a premium format.

Of course, as much as Anderson’s name may now be synonymous with psychological thrillers and atmospheric horror films, there was a time early in his career when he seemed more likely to become the next Steven Soderbergh than the next great genre director. Anderson’s first film, a micro-budgeted drama about turning thirty called “The Darien Gap,” played at the 1996 Sundance Film Festival and was nominated for the Grand Jury Prize. But it wasn’t until two years later that Anderson burst onto the scene with the romantic comedy “Next Stop Wonderland.” Despite a budget of only about a million dollars, audience enthusiasm for the film sparked a furious bidding war at the 1998 Sundance Film Festival, leading Miramax Films to pay more than six million dollars for the rights to distribute the film. According to The Boston Globe, then-Miramax president Harvey Weinstein and five of his staff locked themselves in a hotel room with producer Mitchell Robbins and refused to let him leave until a deal was done. In addition to the money, Miramax also agreed to distribute Anderson’s next two films, an arrangement that would fall through after “Next Stop Wonderland” failed to win Miramax back its initial investment at the box office.

Had Anderson continued to focus on the type of films that played big at the Sundance Film Festival, it’s possible that he could have supplanted David O. Russell as one of the more notable studio auteurs of the decade. Instead, Anderson’s next film set the stage for a very different focus as a director. A surface reading of “Happy Accidents” (which premiered at Sundance in 2000) places it a lot closer to “Next Stop Wonderland” than “Session 9” (released August 2001) in Anderson’s oeuvre. In "Happy Accidents," Marisa Tomei plays Ruby Weaver, a New Yorker struggling to overcome a painful dating history and her own tendency toward emotional co-dependence. Ruby’s most recent unhealthy relationship is with Sam Deed (Vincent D’Onofrio), a hospice worker who claims his increasingly erratic behavior is a result of his recent travel backward in time. Despite her better judgment, Ruby begins to treat Sam’s delusions as a kind of private game between the two of them, causing their relationship to blossom despite the warnings of Ruby’s therapist not to enable Sam’s potentially destructive behavior. Before long, Ruby realizes that her own happy accident was falling in love with an honest and caring man. 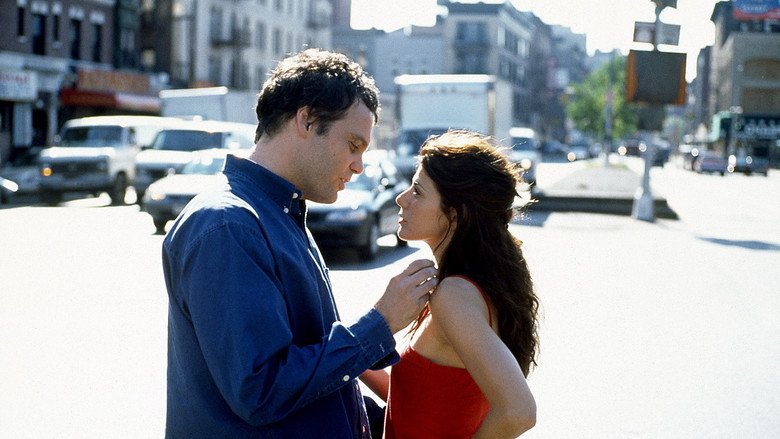 The plot of “Happy Accidents” promises its fair share of independent film whimsy, and Anderson and his cast provide plenty of thirtysomething soul-searching along the way. But whereas “Next Stop Wonderland” is focused on the challenge of finding love in modern society, “Happy Accidents” has its finger on something decidedly darker. Anderson, in his twin roles as both writer and director, does not try to sweep both Ruby and Sam’s unhealthy behavior under the rug. Ruby speaks openly with her friends about the possibility that Sam may be suffering from a mental illness. Meanwhile, despite her ongoing therapy, Ruby is unable to come to terms with the self-destructive nature of her own behavior. Each character hits their nadir in a moment of violence. For Sam, it is an unprovoked assault on a random taxi driver that he thinks may accidentally hurt Ruby at some point in the future; Ruby is shocked to find that she has given Sam a black eye during a particularly bad fight.

And just as we become certain that “Happy Accidents” is headed toward tragedy—where Sam’s spiraling psychosis and Ruby’s manic-depressive behavior put one or both of their lives at risk—Anderson gently steers the movie back to safe ground. “Happy Accidents” favors science-fiction over domestic abuse in its final act. Sam really has traveled back in time from the future to save Ruby from a horrible accident. Ruby, for her part, is saved only because her co-dependent behavior allowed her to stick with Sam long after the point where most people would have walked away. Anderson’s script veers dangerously close to territory normally reserved for psychological thrillers, but Ruby and Sam get their happily ever after, and video clerks around the world shelved “Happy Accidents” in the drama or comedy section, blissfully unaware of how close the film came to being Anderson’s first true horror movie.

And then came “Session 9.” Anderson has always emphasized the importance of having multiple projects on the back burner in case one of them fell through; for years, this included various permutations of horror movie remakes and original psychological thrillers. Anderson described “Session 9” to Back Stage magazine as his response to the “vagaries of the industry,” a movie that he could shoot quickly and for a relatively low cost. With his eye on the abandoned Danvers State Hospital in Danvers, Massachusetts, Anderson and his writing partner Stephen Gevedon set out to make their character-driven take on the classic haunted house movie. Anderson had become obsessed with the facility during his time in Massachusetts and wanted to make a movie that would make the most of its rotting interiors. In telling the story of a hazmat crew rushing to remove deadly toxins from a national landmark, Anderson and Gevedon stumbled on the perfect parallel between story and location.

The title refers to nine recordings, a series of interviews between a Danvers psychiatrist and a woman named Mary Hobbes, discovered by a staff member of a crew run by new father and small business owner Gordon Fleming (Peter Mullan). In her youth, Mary had murdered her family in their sleep and retreated between a series of alternate personalities who prevent her from facing the truth. The more the Danvers team picks at Mary’s buried memories, the closer Gordon gets to remembering his own tragedy. Gordon is not going crazy so much as he has already gone crazy, hurting his family in a moment of blind fear and rage. In a special feature on the new Blu-ray, Anderson and Gevedon describe the real-life inspiration for Fleming as a Boston insurance agent who murdered his family in a fit of rage and then continued going to work as if nothing had happened.

This places the protagonists of “Happy Accidents” and “Session 9” on opposite sides of the same coin. Paradoxically, both leading men are doing their best to prevent a future that already exists in their past. Sam says things that frighten those around him but is in his heart a well-meaning person; Gordon is the face of calm despite the fact that he is rotting from the inside out. Both men are driven to extremes by the woman he loves, and both men are left to carry the guilt of their actions—or inactions—throughout the course of the film. With “Happy Accidents” and “Next Stop Wonderland,” Anderson had spent his previous films exploring the power of love as a motivating force. That power is turned inward in “Session 9,” giving us a twisted, dark lead who, as Truman Capote might say, stepped out the back door just as Sam stepped out the front.

In hindsight, perhaps the screenplay for “Happy Accidents” even tipped Anderson’s hand as to how close he was to making the leap into horror. In one scene, Sam demonstrates the paradox of time travel by running his hand from Ruby’s waist to her foot. Since time flows in only one direction, Sam explains, it breaks all the fundamental laws of physics to reverse the flow of time and head back up to the top of the leg. “But what if time isn’t a rigid line?” Sam asks, bending her leg and placing her heel up against her inner thigh. “What if you could bend space and time so that the present lays side by side with the past? Then you really wouldn’t have to go back at all. You’d just have to make a little leap.” Screenwriting may not be the same as time travel, but the logic seems mostly the same: by bending his male characters so that love, guilt and obsession all swirl together, Anderson did not need to make a huge splash to move nimbly between comedy and horror. He only needed to make a little leap.

So there you have it: a career written in reverse. While many filmmakers choose to establish themselves within the relatively low stakes of the horror genre, Anderson instead built his reputation on one of Hollywood’s biggest stages before shifting his focus ever-so-slightly to the side of madness. “Session 9” was given a limited release by IFC Films on August 10, 2001; as luck would have it, “Happy Accidents” was finally picked up for distribution around the same time, hitting theaters a mere two weeks after “Session 9”’s theatrical release. “If people see both,” Anderson told The New York Times in August 2001, “they’ll think I’m schizophrenic.” As it turns out, history has been far kinder to the filmmaker than he originally anticipated.

"Session 9" is now out on Blu-ray via Shout! Factory. Click here to get your copy.
Advertisement