You're gonna make it after all: Mary Tyler Moore and the women of "Mad Men"

Don Draper, still placed on leave from his ad firm, calls in for an update from his former secretary, Dawn, who has recently been promoted to office manager. Knowing full well about her new position, he still demands she get him some typewriter ribbon and makes clear that he’d prefer she deliver it to his home herself. (She sends a messenger anyway.) When he shows up at the office later in the episode, he repeatedly demands coffee from her and hands her his coat like it’s somehow her problem.

Meanwhile, Don returns a call from wife Megan’s agent—a man, obviously—who wants help managing what he depicts as her hysterics over some failed auditions. (After one, she tracked down the director and found him at lunch with Rod Serling to plead for another shot.) The agent claims he’s calling Don because Don’s the closest thing she has to a manager, but the message is clear, and a telling parallel to an early episode in which Don discusses then-wife Betty’s mental condition with her therapist. The men are in charge. Or, particularly in this more recent case, they think they are. 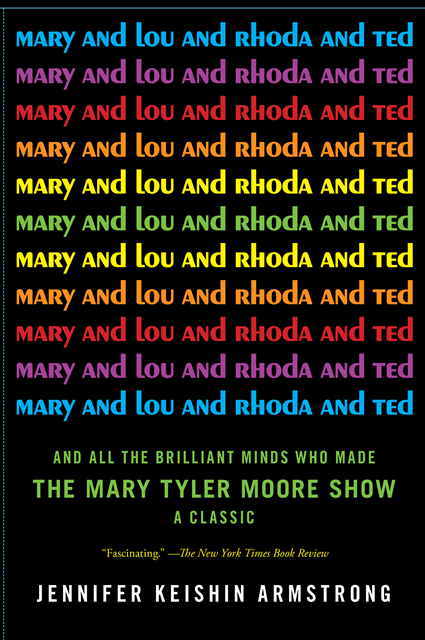 Now that "Mad Men," in its final season, has entered 1969, its female characters are facing a lot of the same problems—all under the heading of “sexism, 1970s-style”—as another group of fighting spirits I’ve tracked particularly closely: the women who wrote for "The Mary Tyler Moore Show." I tell many of their stories in my book about the show, "Mary and Lou and Rhoda and Ted." In fact, their journeys through sexism and the rise of Women’s Lib, all while working on a show that would become a feminist touchstone, inspired the book. And a few episodes into this season of "Mad Men," signs already point to its women embarking on a similar trajectory.

Like "Mad Men"’s Peggy and Joan, most of the women who worked on "Mary Tyler Moore" began as secretaries, contributing enough that they were eventually promoted to the writing staff, breaking in through sheer persistence, undeniable contributions, cheap labor, or a combination thereof. (To be clear, I have no stories about anyone sleeping with a client to get into the upper ranks, a la Joan, but we all know Joan deserves her partner status and was running the joint far before that unfortunate episode.) "Mary Tyler Moore" writer Pat Nardo got her first job in the business for producer David Susskind in New York, and “got to” essentially serve the same function as a junior producer, despite her secretarial title. “The reason David hired women to do all those jobs was he didn’t have to pay them what he paid men,” Nardo says, “and then he didn’t have to compete with other men.” When she got to "The Mary Tyler Moore Show," she knew what she was doing enough to jump from secretary to writer by contributing jokes as she typed up scripts and notes for her bosses.

The men who ran "The Mary Tyler Moore Show," luckily, were no Don Draper and Roger Sterling. They were, instead, the more evolved James L. Brooks and Allan Burns, sticklers for realism and quality who saw the value in hiring and mentoring some female writers, even if those writers were less experienced than a lot of men in town. This way, Brooks and Burns could benefit from real, live women’s perspectives when writing their groundbreaking show about a single, working woman over 30. It makes only too much sense, though its high percentage of female writers—at one point, a third of its freelancers were women—would stand out as much in modern times as it did then. “They wanted us to deliver what we knew of our world,” says Marilyn Suzanne Miller. “They wanted the truth out of us girls. ‘Let’s get some girls together and see what they think and do and say’—that’s the premise of The Mary Tyler Moore Show.”

"The Mary Tyler Moore Show"’s inroads helped the women it actually hired, who used that shiny resume line to start production companies, write for other shows like "Saturday Night Live" and "The Golden Girls," and work in TV management at places like Comedy Central. But we’re still far behind on gender parity behind the scenes, even now, four decades after "Mary Tyler Moore." (According to the Writers’ Guild of America’s most recent report, 30 percent of TV staff jobs are held by women, which means the industry overall is now in precisely the same spot Mary Tyler Moore’s writers were in the ‘70s.) Interestingly enough, "Mad Men" has a majority-female staff, no doubt a major factor in its complicated, realistic female characters. And "Mad Men"’s woman-centric storylines are already a touch more progressive than the reality behind "The Mary Tyler Moore Show," with Dawn, who’s black, starting to figure more prominently. Then, as now, women of color (except those named Shonda Rhimes) are nearly absent from writing jobs. 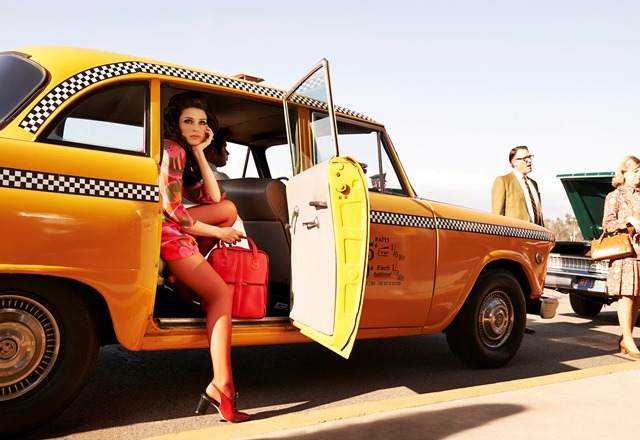 We’re seeing the smaller indignities of being female in a male-dominated workplace come into starker relief on "Mad Men"—a major theme of the Mary Tyler Moore years. Yes, "Mad Men" is famous for its first years, during which it depicted the laughably blatant sexism of the early ‘60s: the ass-slapping, honey-you-won’t-understand-this treatment of women, who were almost all stuck in the secretarial pool. Seeing that play out on television every week, however, had something of a reverse effect. That is, it was all too easy for modern men to watch and say, “See, we know not to act like that anymore, so we’re good.” But there’s something equally insidious, and more difficult to root out, about the little moments of chauvinism—this season, for instance, when that obnoxious new creative chief, Lou, shoots down Peggy’s ideas with a “Who put a knot in your pantyhose?” That’s not so far from anything a guy in the office might think is “just kidding around” even today, so watching the women deal with such knocks could be far more illuminating.

The women of "Mary Tyler Moore" know these moments all too well. During Treva Silverman’s pre-"Mary Tyler Moore" years in Hollywood, for instance, she and her then-writing partner, Peter Meyerson, took a meeting with a high-level producer by his pool. “Oh, I thought Treva was a man’s name,” the producer said dismissively. “So, what is it? Treva writes the story and, Peter, you write the jokes?” Surely a woman couldn’t be funny. Others recall similar meetings, but worse—male producers often assumed the women in partnerships were there just for their typing skills.

Even the women of "The Mary Tyler Moore Show," with a cushier job situation than most women faced at the time, had the same love-life problems we’re seeing the women of "Mad Men" face. The only solid couple left among the core characters, seemingly going strong and unaffected by gender issues, is Betty and Henry, and wouldn’t you know it, this season she mentioned to a friend that she’s “just old-fashioned” about wanting to remain a housewife. As for the rest of the women: Joan is a single mom who appears to have long ago given up on love. (Surely baby daddy Roger Sterling, who can barely show up at work, much less for his kid, is no prize at this point.) Megan and Don have many problems, most to do with Don’s deceptions, but their biggest is unsolvable: He won’t move to the West Coast for her Hollywood career, even though his own career is on the skids. Peggy had a quintessential neurotic-single-girl moment when she commandeered her secretary’s Valentine’s Day roses, thinking they were for her, then dressed her down for not telling her immediately—and, seemingly, just for having a fiancé who sent her flowers. 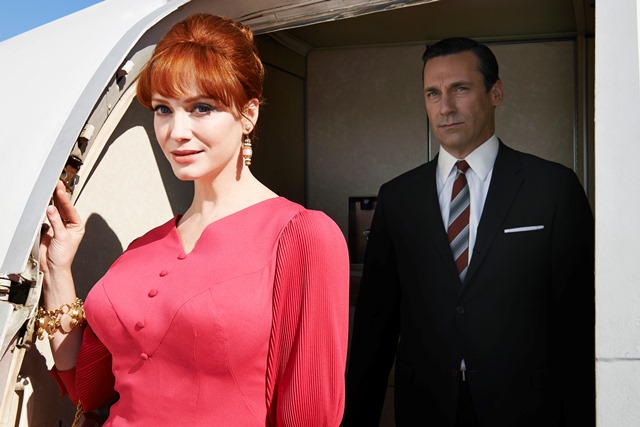 One could argue that Peggy veered toward the pathetic-single-woman stereotype so prevalent in the decades between then and now, but it was a telling, and truthful, incident. "The Mary Tyler Moore Show" writers faced a tough road when it came to romance once they gave up the Betty path for showbiz. Most never married, many didn’t have children, and some married many, many times. A lot of their relationships faltered under the women’s professional success. This isn’t a statement on how women “can’t have it all” as much as it is one that men didn’t want to let them. Marilyn Suzanne Miller, who went on to write for "Saturday Night Live," recalls: “You’d have a million boyfriends. You were always living with someone. But you were making a fortune and winning Emmys. I was dating guys in their 30s and surpassing them, and that made things rough. I dated a guy who was a press secretary, and he said to me one night, in the midst of a very loving moment, ‘There’ll only be one career in my house.’”

Perhaps the biggest similarity between the women of "Mad Men" and their real-life counterparts behind "The Mary Tyler Moore Show" is, surprisingly enough, the most heartening. Despite all of the trials they face just for being female, they have found the men willing to see their potential, and to use their masculine privilege to help them break through the patriarchy. As I mentioned, this might not always be for the most heartwarming of reasons— female managers came cheaper and often worked harder to prove themselves. But "The Mary Tyler Moore Show" producers understood the value of female perspectives and gave women a chance, and that helped us inch toward progress, even if it’s come a lot slower than we may have hoped.

Even Don Draper, with his coffee-demanding, condescending ways, couldn’t help but see Peggy’s talent far before a time when it was cool to hire women. And if there’s hope for Don Draper, there’s still hope for us all.