A Satire, Serious Melodrama, Rock Musical, Comedy, Violent Exploitation Picture, Skin Flick and Moralistic Expose: On "Beyond the Valley of the Dolls"

“When I’m with you, pussycat, who needs grass?” “Porter, you have an unending capacity for counterfeit astonishment.” “Come into my den, said the spider, et cetera.” “This is my happening, and it freaks me out!”

If nothing else, Russ Meyer’s 1970 exploitation epic "Beyond the Valley of the Dolls," about a trio of young female rock-and-rollers who move to Los Angeles and get embroiled in romance, drugs and a fight over a will, is a treasure trove of quotable lines, most of them courtesy of this site’s founder, Roger Ebert. It’s out on Criterion Blu-ray this week in a disc loaded with extras, including an essay by RogerEbert.com contributor Glenn Kenny, a 2003 audio commentary by Ebert from the regular-resolution disc, a set of five documentaries about the making of the movie, and a 1988 episode of "The Incredibly Strange Film Show" about the career of Russ Meyer.

Ebert wrote the screenplay for "Beyond the Valley of the Dolls" at the request of Meyer, a mammary-obsessed filmmaker he’d gotten to know personally. Ebert was just 27 when he finished the script. It was a tricky assignment because he had to devise something in the spirit of the original "Valley of the Dolls" (which not-coincidentally is being released simultaneously on Blu-ray by Criterion, with extras that include a video essay by RogerEbert.com contributor Kim Morgan).

The original is an alternately scuzzy, solemn and ridiculous trash-fest based on Jacqueline Susann’s bestselling novel. The original adaptation of the book made a mint; the film’s releasing studio, Twentieth Century Fox, wanted a sequel, and had the rights to make one whether or not Susann had a source novel to base it on, and regardless of whether she approved of the story. Like a lot of the major studios at that time, Fox was hemorrhaging money and pinned its survival to the youth market. The surprise success of “Easy Rider,” an independent film that grossed 30 times its production cost, sent Fox and its competitors scrambling to find the newest hippie-flattering exploitation flick. Of course, most of the studios’ efforts were tone-deaf and did not connect with their intended viewers; but that didn’t stop them from greenlighting more projects in that vein. 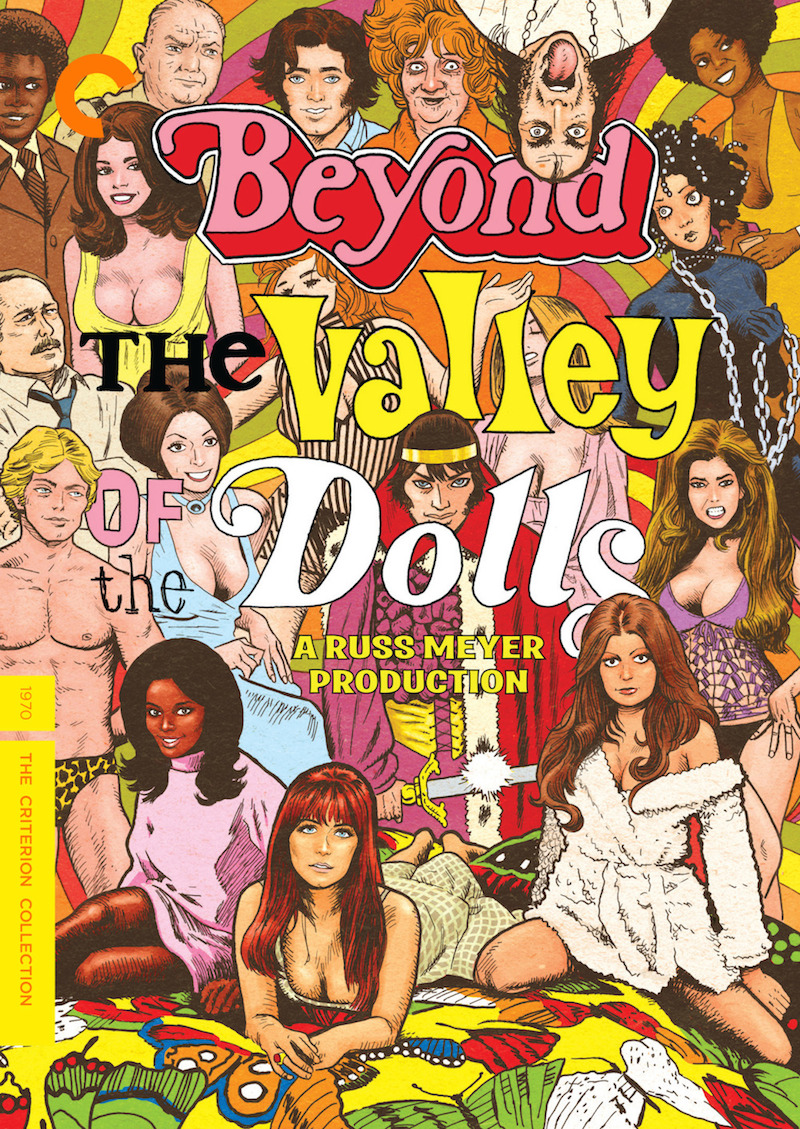 The biggest was "Beyond the Valley of the Dolls," a CinemaScope spectacular filmed on a series of huge sets and stocked with gyrating actresses, models, agents, managers, musicians and uncategorizable oddballs. The lapels are wide, the skirts short, the pneumatic breasts enormous. Meyer and Ebert screened the 1967 film of "Valley of the Dolls" as preparation but without reading the novel; their mandate was to work with the same formula and tell a new-ish story about three young women (in this case, rock musicians played by Dolly Read, Cynthia Myers and Marcia McBroom) who go to Hollywood and are plunged into a world of decadence. There are a few characters from "Beyond the Valley of the Dolls" who are essentially "Valley of the Dolls" characters with names and key details changed, but for the most part the milieu is original—and the tone definitely is. The dialogue’s super-arch, "All About Eve"-like tone, coupled with the story’s knowing blend of cruelty and innocence, is more reminiscent of Meyer’s "Faster, Pussycat! Kill! Kill!" than anything Susann wrote.

Ebert said Meyer wanted a movie that could “simultaneously be a satire, a serious melodrama, a rock musical, a comedy, a violent exploitation picture, a skin flick and a moralistic expose.” No lack of ambition there. The result stays dirty but essentially light right up to the end, a ghastly-brutal home invasion improvised during production and modeled on the Manson murders that happened shortly before production began, in locations not to far from where "Beyond the Valley of the Dolls" was shot. Susann was not amused. After "Beyond the Valley of the Dolls" hit screens, she sued and won a settlement, arguing (improbably, given the spectacular nastiness of her own fiction) that Ebert and Meyer’s sequel had ruined the integrity of her brand.

Despite period details that were already behind-the-curve when the movie came out (Hollywood is always late to the party when it panders to youth culture) and a certain moralistic undertone characteristic of Meyer, "Beyond the Valley of the Dolls" is still a gas, thanks mainly to its heedless energy and its “are they kidding or not?” tone. According to Ebert, Meyer instructed the actors to deliver the script’s outrageous dialogue with a straight face, and apparently succeeded in convincing them that he was trying to make a serious statement about something or other. As Roger Ebert wrote in a 1980 appreciation of the movie published on its tenth anniversary:

Meyer directed his actors with a poker face, solemnly, discussing the motivations behind each scene. Some of the actors asked me whether their dialogue wasn't supposed to be humorous, but Meyer discussed it so seriously with them that they hesitated to risk offending him by voicing such a suggestion. The result is that "BVD" has a curious tone all of its own. There have been movies in which the actors played straight knowing they were in satires, and movies that were unintentionally funny because they were so bad or camp. But the tone of "BVD" comes from actors directed at right angles to the material.

The right angles proved to be the right angle. The peculiar, slightly baffling tone means that the movie works even when it isn’t working—and there are many elements that shouldn’t work in any environment save a David Lynch film, in particular the bloody finale and a related, totally unmotivated twist which reveals that a character you thought was a man was actually a woman. It helps that this is a terrifically well-made piece of trash. "Beyond the Valley of the Doll'"s light-speed editing (some of which was meant to cover up bad performances) feels shockingly modern. Ebert’s knowingly unnatural dialogue lodges in the brain like song lyrics from a satirical musical. The whole contraption knows what it is—an experience, not a statement—and what pop cultural vein it’s operating in (Ebert’s screenwriting credit appears over a shot of a big-breasted woman with a gun in her mouth).

The characters manage to be excitingly weird even when the performances are hit-and-miss. Some of them are conceived at right angles to reality. Ebert and Meyer based many of the key personages, including the rock band’s manager, Ronnie "Z-Man" Barzell (John LaZar) and heavyweight champ Randy Black (James Ingelhart) on major celebrities (Phil Spector and Muhammad Ali respectively) without ever meeting them; it was more a loopy notion of send-up than an attempt at substantive commentary. (Z-Man speaks in iambic pentameter that mashes up at least a dozen Shakespeare plays.) A certain bruised innocence comes through even when the movie is at its most facetious. It’s as if Meyer is in denial that there’s a Pollyanna buried underneath the layers of raunch that he wore as protective armor; in odd, fleeting moments, this movie let us see it.

To purchase your Criterion Collection Blu-ray or DVD of "Beyond the Valley of the Dolls," click here.