A Look At “Twin Peaks: The Return”

When I first heard that David Lynch, along with partner Mark Frost, was going to do the seemingly impossible and revive his landmark 1990-1991 television series “Twin Peaks” for the Showtime cable network, I, presumably like many others, was filled with equal parts excitement and trepidation. On the one hand, to see Lynch bring back the show without the restrictions placed upon it by the standards of network television was undeniably intriguing and he was able to round up an impressive cast that included many veterans of the original series as well newcomers to the fold such as Monica Bellucci, Naomi Watts, Laura Dern, Amanda Seyfried, Robert Forster and Michael Cera, to name just a few. Most impressively, Lynch was not only directing and co-writing (with Frost) the entire thing but he was approaching it not as a television series but as a single 18-hour movie that was only being presented in hour-long chunks. On the other hand, considering that the original series was enshrined as one of the greatest and most groundbreaking works in the history of the medium—a position that not even audience apathy towards its later episodes and the underrated 1992 big screen spinoff “Fire Walk with Me” could shake—was it possible that it would live up to the impossibly high expectations?

Based on a viewing of the first four hours of “Twin Peaks: The Return,” it sure seems as if Lynch has pulled off the task of creating something just as audacious and fascinating as its predecessor. Of course, trying to judge a film based solely on roughly 22% of the complete work is always a dangerous thing and trying to break it all down only minutes after watching them—Lynch and Showtime did not make any parts of it available for the press in order to help preserve its secrets—seems kind of crazy. A Lynch film needs time to marinate in the mind and is not especially suited for the immediate hot take. While I cannot say how it all plays to someone with no prior working knowledge of “Twin Peaks,” as a fan from way back, I can attest that the combination of crime drama with elements of surrealism, weirdo humor, supernatural horror and soap opera kitsch is as potent as ever. If the whole thing lives up to the promise of the initial four hours, this should go down as a major work from Lynch, who hasn’t made a movie since 2006’s “Inland Empire,” and one of the major TV events of 2017. 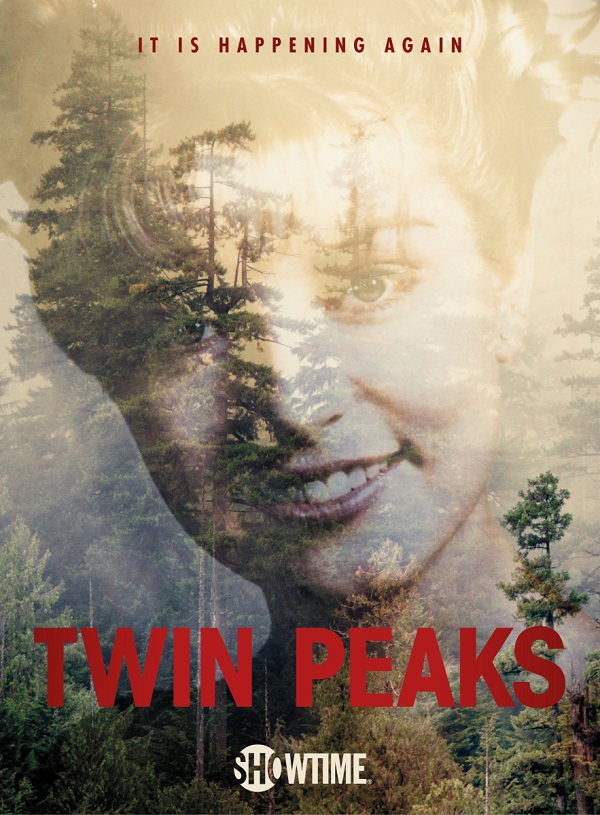 When the previous series ended, straight arrow FBI agent Dale Cooper (Kyle MacLachlan), who was sent to the small Pacific Northwest town to investigate the murder of teen queen Laura Palmer (Sheryl Lee), found himself trapped in the Black Lodge, a red-curtained adjunct to the netherworld while a monstrous double took his place in the real world. When the new series begins, 25 years have passed and Cooper is still stuck in limbo while his evil twin is out there leaving a trail of carnage wherever he goes. For Cooper to be able to leave the Black Lodge at long last, the bad Cooper must return to the fold and the latter is decidedly not on board with that idea. To complicate matters even further, there appears to be another doppelganger of Cooper out there, a family man with an apparent dark side by the name of Dougie Jones, and when Cooper makes his leap out of the Black Lodge, it is him that he inadvertently winds up replacing.

While all of this is going on, other events are transpiring in other locales. In New York City, a young man is employed to sit in a heavily guarded building and watch a large glass box to document what might happen inside it. Spoiler Alert—something does and makes messy work of both him and his girlfriend. In Buckhorn, South Dakota, a severed head and a headless body have been joined together in a grisly tableau and when it is determined that his fingerprints are all over the place, a local high school principal (Matthew Lillard) is arrested for the crime. As for Twin Peaks, the denizens are as strange as ever. Deputy Hawk (Michael Horse) receives clues to a potential mystery over the phone by the woman known as the Log Lady (the late Catherine Coulson), while Deputy Andy (Harry Goaz) and his wife Lucy (Kimmy Robertson) are as daffy as ever—the latter cannot quite grasp the concept of cell phones and thereby freaks out when she speaks to Sheriff Truman—his brother Frank (Robert Forster), who has stepped in to help his ailing brother Harry—on the phone and he appears in the building seconds later. Ben Horne (Richard Beymer) is still running the hotel while ne’er do well brother Jerry (David Patrick Kelly) has become a success selling cannabis derivatives. 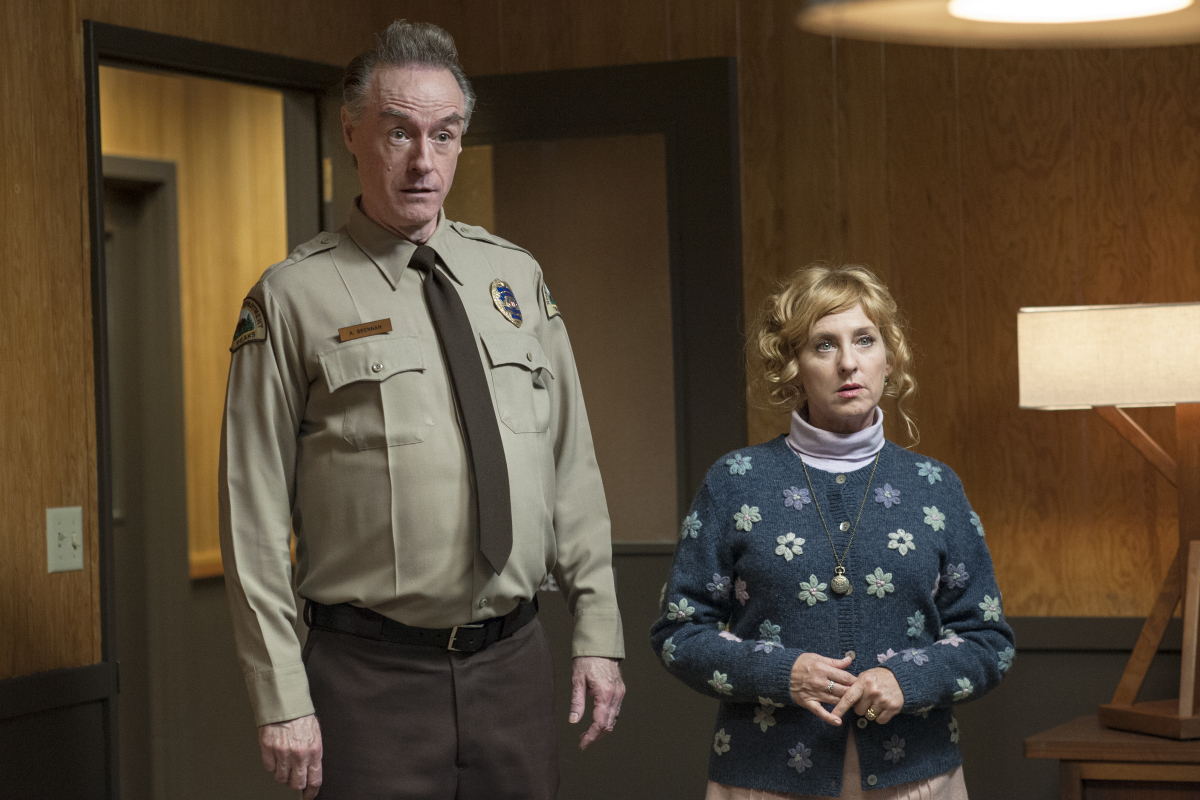 It is impossible to judge “Twin Peaks: The Return” on the basis of its story at this point as the various narrative strands are still being introduced and have yet to come together in any coherent matter. As a collection of individual scenes, however, they do an excellent job of reestablishing the unique tone of the old series without merely copying it. There are moments of pure surrealism, such as Cooper’s various wanderings through the Black Lodge. There are moments of grand hilarity, the funniest of which is probably the revelation of Andy and Lucy’s son, a moment that I wouldn’t dream of revealing. Horror lurks around every corner as well, both in the various depravations of the evil Cooper that we witness and the bit where the guy who is charged with keeping an eye on that glass box picks the wrong time to start making out with his girlfriend. And yes, there are even moments of swoony romance as well, the best of which comes when Shelly (Madchen Amick) and James (James Marshall) spot each other from across a crowded bar.

Any worries about Lynch being a bit rusty after going more than a decade without directing a major film will be relieved to know that his work is just as beautifully bizarre as ever. Freed from the shackles of directing according to the rules of episodic television, in which every episode has to build to some kind of climax. Here, he establishes a deliberately slow and meditative pace that may baffle newer viewers but which is tonally right for the material. He juggles the scenes in such a way that you literally can never tell what is coming next. His ability to conjure strange and haunting visual moments is as strong as ever—the scenes inside the Black Lodge, which include the sight of Laura Palmer removing her face and revealing a bright light behind the facade and something known as “the arm” are as bizarre as anything that he has ever offered up before. Lynch also gets a lot of help from his technical team as well. Cinematographer Peter Deming, who shot “Mulholland Drive,” has done the honors here and I can almost guarantee that you will not see a better-looking TV show (or possibly even a movie). Composer Angelo Badalamenti has returned as well and contributes a score that kicks off with the pure nostalgia of the iconic “Twin Peaks” theme before going off in new and memorable directions that evoke the past without becoming a slave to it. (Speaking of music, I also like how the various episodes, for lack of a better word, are concluding in the Bang Bang Bar with a different band delivering a full performance of a song.) 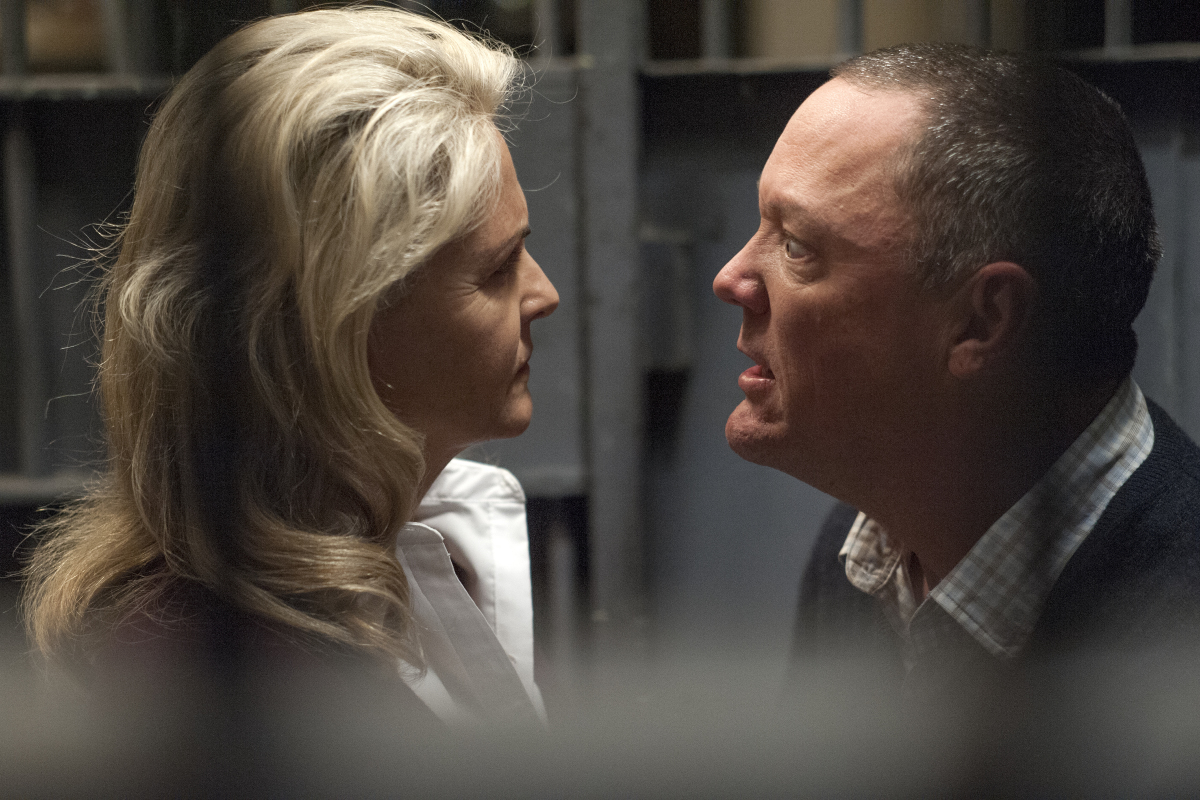 As we are still relatively early in the proceedings, most of the characters, new and old alike, are still being established and many of them, chiefly Sherilyn Fenn’s Audrey, have not yet made an appearance at all. Nevertheless, they are all uniformly good—the veterans slip back into their old characters with such seeming effortlessness that it feels as if they never let them slip away in the past quarter-century while the newcomers do a good job of fitting in with the tone of the material. Kyle MacLachlan gets the most on-screen time here so far and his performance is quite striking in the way that he conjures up his three variations of Cooper—the noble one trapped in the Black Lodge, the evil one capable of killing virtually anyone he encounters just for the heck of it and the one who inhabits the body of Dougie Jones but seems unsure of how to work the controls, much to the exasperation of Dougie’s wife (Naomi Watts) and the amusement of his child. Of the newcomers, the most memorable performance comes from, of all people, Matthew Lillard, who is really kind of great as an outwardly nice and normal man who is accused of committing a horrible crime that he has absolutely no memory of—his extended interrogation scene is especially powerful and gripping thanks in large part to his powerful and wrenching work.

Look, I am fully aware that “Twin Peaks: The Return” could still turn out to be a bust and strand the large cast in a screenplay that never comes together in any meaningful way and which just devolves into weirdness for weirdness’s sake. That said, David Lynch is one of those filmmakers with a track record strong enough to earn him the benefit of the doubt and these first four hours are as pure and unadulterated in their Lynchness as one could possibly hope them to be. The show may not dominate the cultural conversation as the original series did during its groundbreaking first season but based on the laughs, thrills, chills and “WTF?” moments that have already been deployed, but I can’t wait for more.