Great directors and their stampeding fans 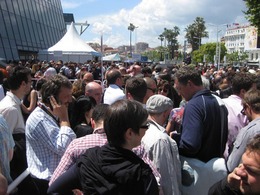 My first movie at Cannes will hopefully end up being my worst movie at Cannes. I chose to see "William Vincent," directed by Jay Anaia. James Franco starred and produced, as it was his production company Rabbit Bandini Productions that made the film.

I love James Franco and think he is a great actor. I was interested in finding out the types of films he would make if given more control. Unfortunately, the result was disappointing.

"William Vincent" was definitely an art film. One would be able to easily pull hidden meaning from the choice in lighting, editing and mise-en-scene, but not in an enjoyable way, or a way that supported the story. The stylistic elements felt forced. It felt like a film that was putting more focus on making sure it was "artsy" rather than telling a truly fascinating story.

The premise focuses on the character of Joseph who decides at the last minute not to get on a plane that ends up crashing and all those on board are instantly incinerated. Then, instead of going home and telling his family he is alive, he changes his name to William and not too long after, gets twisted in with this group of drug-traffickers. I have to say however, that people were constantly in and out of the small theater throughout the film, and it was pretty distracting. Apart from my group of people, I think the movie ended with an entirely different audience than it began with. 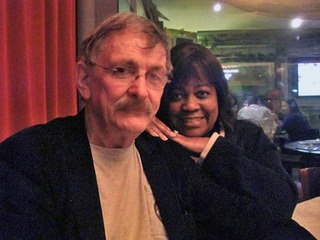 Having dinner with Paul again the following night. It was even more wonderful because Chaz Ebert came too!

I might also have been a bit distracted because of what I was doing later on that evening. I was having dinner with Paul Cox. Paul was born in Holland but moved to Australia many years ago, and has been making movies ever since. He is my favorite director -- all of his movies are about the human condition, truth and beauty, but in their most raw sense of the meanings. The films are spectacular and each one tells its own very personal story.

He has made films about a wide array of unique human beings, from Vincent Van Gogh, ("Vincent," 1987) to Russian ballet dancer Vaslav Nijinsky, ("The Diaries of Vaslav Nijinsky," 2001) to the recently canonized Father Damien, ("Molokai: The Story of Father Damien," 1999). His films, like "Nijinsky" for example, don't fall into genres or categories, they surpass them. It isn't a documentary film, or a dramatic film, or a comedic film, it is all of those and none of those at the same time. His films are whatever the audience needs them to be at that specific time in their life. When watched again at a later point they transform into something totally different. The films are there for you when you need them. "Innocence," which is at the local video store back in Athens Ga., is one of my favorites, and is probably one of his better-known films. 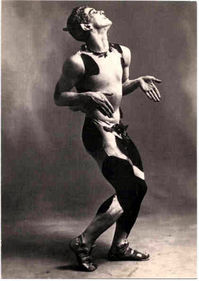 I have known Paul since I was about eight years old but usually only see him once a year in France. Last year he was very sick and needed a liver transplant. Remarkably, he received one this past Christmas. I think his presence at the Cannes Film Festival only months after he received the transplant speaks for how well he is recovering. But anyone who knows him wouldn't expect anything less.

I felt so lucky to be able to see him again, and so happy that the world didn't lose one of its most important filmmakers. I have no doubt that many films will be seen from Paul soon enough and they will come to us with a new-found perspective on life. It is rather rare to have been so close to death for such an extended amount of time and then to be given an opportunity to live well again. I cannot think of another person more needed in the world of directing and filmmaking, or a more caring and sensitive human being than Paul, whose full name is Paulus Henriqus Benedictus Cox. 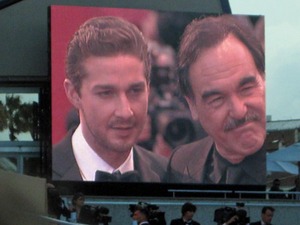 Shia LaBeouf and Oliver Stone on the Palais' jumbotron.

May 14th -- Today I felt like I was in a zoo with a bunch of really rich, well-dressed animals. More specifically, stampeding animals. Animals who aren't running away from anything but running toward anything film related. Whether it be a celebrity, the rumor of a celebrity, a meeting or an actual film, people were, dare I say, vicious. I am honestly surprised that I didn't get hit by one of the "Cannes Festival Official" cars, which drive people the two-minute walk from the hotel to the red carpet. But I am getting ahead of myself. I started off the day with the film "Chatroom," directed by Hideo Nakata, who also directed "Ringu." 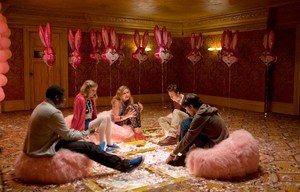 I arrived about forty-five minutes early and could not even reach my designated line outside of the theater. It was blocked by too many people standing in the line in front of it, so I walked around to the other side and stood on the sidewalk, which seemed to have turned into a line of its own. The guards began scanning press badges first, as they are top priority. It seemed as if they were going to fill the 1,068 seat theater all by themselves, but then they opened all other lines and as long as you had a badge, it became a free for all.

The orchestra was already full so people were rushing up the stairs to the balcony. The tension was palpable. Everyone knew their were too many people and too little of the comfy, soft, red seats. After going into one section of the balcony and realizing it was totally full, I spotted a patch of seats farther down that were still available. The problem was that I spotted them at the same time as the other thirty or so people who had also come sprinting into the wrong section. So it became a race, and thankfully I wasn't wearing heels! I made it to a seat and not one of the seats that are too far over, causing a speaker to block part of the screen, but a seat that satisfied all of my movie-going requirements. But on to the actual movie: the film, which is about Internet chatrooms and all of the things that can take place within them, was told in a unique fashion, that after a while, I began to enjoy. They were filmed as real rooms, with the characters face-to-face, and each room was decorated with the personality of its maker, like an Internet page that has personal settings. And although the film didn't relax me after my adventure to my seat, I was glad I saw it. 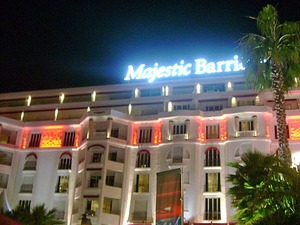 I also saw the red carpet for the screening of Oliver Stone's "Wall Street: Money Never Sleeps." Shia LaBeouf, Carey Mulligan, and Michael Douglas star in the film and were all walking the carpet. Martin Scorsese, George Lucas and Salma Hayek, also showed up for the screening. Prior to the carpet I was at the Majestic Hotel getting the daily magazines, outside of it is where most of the craziness with crowds occurred, and I spotted actress Camilla Belle, who everyone now knows as ex-girlfriend of Joe Jonas. If you are currently in Cannes and enjoy seeing various celebrities, one of the best places to hang out is the lobby of the Majestic about an hour before the big premiere begins. However, if you are prone to panic attacks or claustrophobia in any way, I would recommend avoiding this spot during this specific time at all costs. And now many hours later, I am back in the cozy town of Juan Les Pins. I am here along with 26 University of Georgia students who are all on a study abroad program. They see as many films as possible during the festival and then spend the following two weeks work-shopping the film reviews they write during the festival. Many of them saw the film "Howl" today, which is directed by Rob Epstein, and enjoyed it, so I will definitely try to catch the next screening. But for now, it is time for some sleep!