Coming down from those 6-hour dinners... 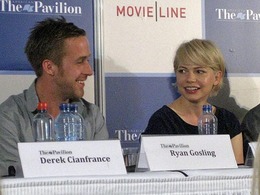 May 22 -- The past three days have been a whirlwind of films, panel discussions and French-style dining (meaning 6-hour dinners that start at 8 pm at the earliest). All of this has resulted in minimal sleep or in some extreme cases, no sleep at all. On Wednesday, after a solid week into the festival and with less than a week to go, the atmosphere becomes more restless than usual. People can feel the end approaching and a repressed feeling of panic can emerge.

I had planned to see "Blue Valentine," directed by Derek Cianfrance in the Bazin theater and then directly after hop into the long line that would have formed during that screening, for Lee Chang-Dong's "Poetry." The first part of this plan was successful. "Blue Valentine," which stars Ryan Gosling as Dean and Michelle Williams as Cindy (in photo above), takes its audience on a gut-wrenching roller coaster of laughter and tears as it follows their relationship from inception to destruction. It is easy to fall in love with the characters' strengths and flaws and this happens almost instantaneously. This of course, makes it all the more difficult to watch the miscommunications and struggles that they both face with each other and with themselves. And even though it was far from the "feel good" movie of the year, it showed a glimmer of truth in relationships that is often hard to portray on film.

When I exited the theater, I expected to see a couple hundred people anxiously awaiting the next screening, but instead I only saw a couple of guards. One of them told me the screening had been canceled and when I tried to figure out why he just kept repeating the word "canceled," in several different languages. Instead of dwelling on it any longer I headed over to the Salle du Soixantième to see "Tamara Drewe," directed by Stephen Frears. 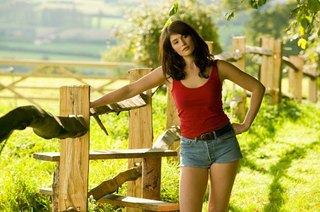 I had no idea what I was walking in to see, and when I walked out I still wasn't exactly sure. The film had its funny moments, but it also had some comedic parts that I don't think Frears intended to be amusing. The film, which had exaggerated characters and a satirical plot, didn't exaggerate them quite enough. I was not sure if it was intended and the characters were in on the joke, or if it was just poorly acted. Either way, I was relieved to have gotten into a theater that wasn't "complet" or "canceled."

The film got out at out around 11:45pm, or 23:45pm for all in Europe, and so we ran to catch the last train to Juan Les Pins, which leaves at midnight each night. Of course when we got there, it was canceled. Instead, the bus system had taken over. We bought our ticket at the train station and loaded onto the bus that was right outside.

The bus ride, which took significantly longer than the train, was entertaining. A French man with a guitar began singing very popular American songs, and soon enough the whole bus, including the driver, joined in. As I listened to everyone belting out songs from "Stand By Me," to "I Will Survive," I was taken back to my high school field trip days. I'm sure the majority of the people had no idea was they were singing and had just memorized the words to the well-known songs. I have fallen guilty to this special way of learning lyrics, especially when it comes to French rap.

The following day Australian film director Paul Cox, who I blogged about in a previous post, gave his annual talk to the University of Georgia students who are here experiencing Cannes for the first time. Paul always provides a well-needed, fresh perspective on filmmaking. The students get to hear from a nice range of people -- producers, editors, critics, directors -- from various points on the creative spectrum. Some are more conservative and mainstream and others, like Paul, offer other perspectives that can really enlighten a want-to-be filmmaker. 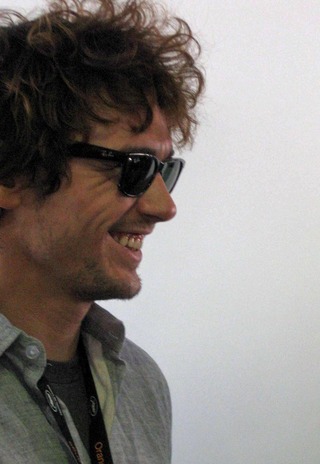 This picture was taken by University of Georgia Cannes Program coordinator Anna Beaver, as I was too busy staring to catch a photo.

After the talk I headed into Cannes to go to the American Pavilion who was putting on panels all throughout the day. I wanted to go to the "Blue Valentine" panel, which would feature the director, producers and actors, and I wanted a guaranteed seat so I arrived a little over two hours early. And I guess it was a little too early because people were still in line for the "American Short Filmmakers in Cannes" panel, taking place before the one I was attending.

I wandered inside the pavilion and got onto a computer to check my e-mail. When I looked up James Franco was walking right past me. He was there to speak on the panel for his short film "A Clerk's Tale." He gave a friendly "hey," as he passed by and I just stared and smiled. Some students were there and they snapped as many pictures of the beautiful Mr. Franco as they could.

I got severely sunburned waiting in the front of the line for the "Industry in Focus - Blue Valentine" panel, but it was all worth it. Cianfrance explained how the project had been in the making for the past 12 years with many false starts and producer Lynette Howell added that "when you have an unwavering passion for the script, and when you feel that way as a producer, you have to get the project made." Gosling and Williams spoke about the pre production process, which included the two of them living together for a month "to get to know the way each other moved."

"We spent time together grocery shopping with the budget we were given for the week; we painted the dog house; we made the home movies and we had a 'fighting day,'" Williams said. Both agreed that they had never done any kind of pre-production like what they did to prepare for "Blue Valentine." Williams added that it was "the way I've dreamed of working since I was a little kid." 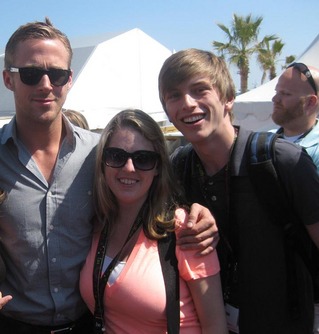 The moderator of the panel was Steve Zeitchik of the LA Times and he opened up the panel for questions for the last 20 minutes or so. One of the last questions was about the message of film, as it was left open-ended. Cianfrance responded by saying that he did not make the film to give a message and said that, "the film is there to inspire and instigate questions."

The short film corner, which is set up in the basement of the Palais, was having its daily "happy hour," just in time for me to attend after the panel. It is a great place to mingle and meet people, especially younger filmmakers who are in Cannes with their short movies, many of whom hope to expand their projects into features.

On Friday it was not hard to feel the change in the dynamic of the festival. There were significantly less people and pavilions were taking down their decorations while the market was being dismantled. I was excited about the day however, because Chicago-Tribune critic Michael Phillips was speaking to us. He gave advice to the students, who have to write a good number of film reviews while they are here in Cannes. 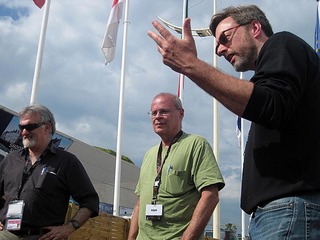 Phillips focused on how to take notes during the film, how to do research before writing the review and how to actually start the review, which many say is the hardest part. He explained ten or so important rules for writing a review and three points originally suggested by Goethe. Phillips made them extremely relatable for film reviewing. Number one: What is the filmmaker trying to accomplish? Number two: How well was it accomplished? And number three: Was it worth accomplishing?

Towards the end of the talk Gary Meyer, director of the Telluride film festival, happened to walk by and joined in on the discussion. He suggested that some student apply to the student program that Telluride puts on during their festival. Phillips ended the lecture by advising the students to "start each of their remaining reviews differently," giving examples like "making one an appreciation essay on a specific performance and another that focuses on visual style." The talk was so helpful and engaging, and inspired confidence in everyone. Phillips said he has four words that stare at him when he writes reviews at his desk at home -- "Be specific. Be brave."

Tomorrow is the last day of the festival and all of the in competition films are replaying. I am planning on seeing three or four films and then tuning into the closing ceremony on television. It will be a bittersweet day, filled with films and a quiet Cannes. 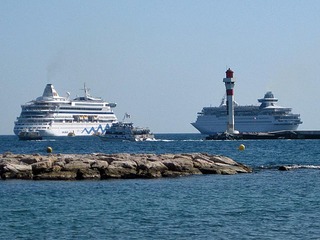 - Lindsay Lohan was seen on Thursday. She was spotted getting into her white Mercedes over by the yachts. The warrant is still out for her arrest but she is reported to have headed back to LA today.

- The "Palm Dog" award, which goes out to the best canine in a film here at Cannes, was given to the dog, Boss, in the film "Tamara Drewe."

- The jury award for the Un Certain Regard category was given out today to "Octubre," by Daniel and Diego Vega.