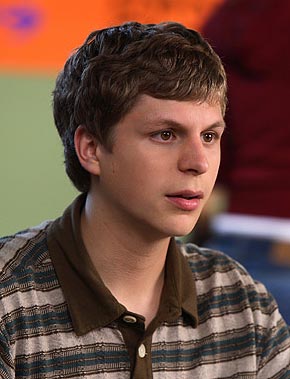 Superbad-position: I don't know what this photo has to do with this post. I just think Michael Cera is a genius and his face is hilarious.

Excerpts from two pieces I've read recently that to me (of course) get at the essence of movies, and how we perceive them: First, a paragraph from Jonah Lehrer's introduction to his book "Proust Was a Neuroscientist" (look for the madeleine on the cover!), a most enjoyable volume dedicated to the proposition that the arts understood science long before science did. (Lehrer, the 26-year-old author, is described in the jacket blurb as a Columbia grad and Rhodes Scholar who "has worked in the lab of Nobel Prize-winning neuroscientist Erik Kandel and in the kitchens of Le Cirque 2000 and Le Bernardin." His book includes chapters on Walt Whitman, George Eliot, Auguste Escoffier, Marcel Proust, Paul Cezanne, Igor Stravinsky, Gertrude Stein, and Virginia Woolf.)

Unfortunately, our current culture subscribes to a very narrow definition of truth. If something can't be quantified or calculated, then it can't be true. Because this strict scientific approach has explained so much, we assume that it can explain everything. But every method, even the experimental method, has limits. Take the human mind. Scientists describe our brain in terms of its physical details; they say we are nothing but a loom of electrical cells and synaptic spaces. What science forgets is that this isn't how we experience the world. (We feel like the ghost, not like the machine.) It is ironic but true: the one reality science cannot reduce is the only reality we will ever know. This is why we need art. By expressing our actual experience, the artist reminds us that our science is incomplete, that no map of the matter will ever explain the immateriality of our consciousness.

On the other hand, the mind is what the brain does. We just have no way of knowing how or why. But this paragraph speaks directly to experience of all kinds, including vicarious or representational ones -- and to my conviction that valid criticism of any kind needs to be both empirical (drawing on specific examples) and aesthetic (a subjective attempt to explain how something feels). Blanket terms like "beautiful" or "ugly" can only be defined/refined in this context. I think of it this way: A dog's butt doesn't smell "bad" to a dog. And poop doesn't offend a dog's sensibilities. Canine responsiveness to scent is roughly 40 times greater than ours, so perhaps you could say that dogs can smell "past" the limitations of our olfactory abilities to detect something more fully dimensional (the way some people savor the flavor of stinky cheese, perhaps). Or, they just like stink, in which case we may consider them to have bad taste. Or, maybe, admire them as perverse primitivist punk rebels who enjoy wallowing in filth for the sheer animalistic pleasure of it. Or would that be anthropomorphizing them? If only dogs could explain what and how they see and smell and hear and feel...

From a recent Scientific American article about physicist Hugh Everett, who introduced the "many worlds" interpretation of quantum mechanics, which posits the existence of countless alternative universes:

In the quantum world, an elementary particle, or a collection of such particles, can exist in a superposition of two or more possible states of being. An electron, for example, can be in a superposition of different locations, velocities and orientations of its spin. Yet anytime scientists measure one of these properties with precision, they see a definite result -- just one of the elements of the superposition, not a combination of them. Nor do we ever see macroscopic objects in superpositions. The measurement problem boils down to this question: How and why does the unique world of our experience emerge from the multiplicities of alternatives available in the superposed quantum world?

No, I don't pretend to understand the first thing about quantum physics. I just like metaphors (see above). And what is a metaphor but something that is one thing and another at the same time? I think this is the most compelling argument for "dancing about architecture" that I've ever seen. Substitute "movie" for "superposed quantum world" in that last sentence, and that's the kind of question movie critics should be asking every time they (we) set out to write something. A movie can never be definitively measured. It exists in space and time and other sensory dimensions that are irreducible and inaccessible to language. So, how does our own experience of a particular film emerge from the possible alternatives? Or, returning to the Lehrer quote, how do you convey what happens in the gap between the synapses? I hope that's what the best of us are asking.

[Side note to Lehrer's paragraph: "Our culture" (by which I believe he means Western culture, specifically American culture) is also permeated by strong beliefs in the non-empirical and unscientific -- pervasive feelings that the world can be explained by supernatural or mystical forces. That's the impulse behind the unique 20th century (worldwide) rise of the phenomenon known as fundamentalism, a reaction against the rational and materialistic aspects of modernity. Polls show that more Americans believe in the devil than in the validity of evolution, a finding that Reuters says reflects "America's deep level of religiosity, a cultural trait that sets it apart from much of the developed world." The same 2007 Harris Poll estimates that 31 percent of Americans believe in astrology, 68 percent in the devil, 27 percent in reincarnation, and 69 percent in a literal afterlife that includes hell. My favorite stat from the (unscientific, I'll bet) 2003 Harris Poll: "... some people who say they are not Christian believe in the resurrection of Christ (26%) and the Virgin birth, Jesus born of Mary (27%)." Talk about your superpositions: If self-defined non-Christians hold core Christian beliefs, then what makes a Christian a Christian? Or not?]