Will "Mean Girl" Palin herself appear on SNL?

And, if she does, how many viewers will be able to tell the difference? Is this gonna be the talent portion?

It's looking more and more likely that Alaska Gov. Sarah Palin will appear on ''Saturday Night Live'' -- to have some fun with Tina Fey.

As the comedian's impressions of the GOP vice presidential candidate draw laughs from Republicans and Democrats alike, a top honcho from the John McCain campaign tells me there's a debate going on about how to respond.

[...] While next weekend's ''Saturday Night Live'' will be a rerun, it is possible Palin could appear Thursday on the first of NBC's ''Weekend Update'' specials in prime time. 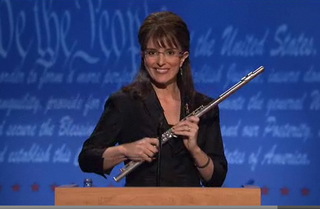 Something strange is happening, though: Fey's Palin is not only sharper and funnier than Palin's Palin, she's also more vivid, more... real (maybe because she's on TV more). It's as if she's the main Palin and the other one is the paler surrogate Palin.

So, what would happen if the two of them actually appeared together? My theory: Matter and anti-matter will collide and end the universe.

But the connection between Pey and Falin Fey and Palin may be deeper than most realize. Several women have told me that Palin has been haunting their nightmares in ways no other electoral candidate ever has, and a reader of Andrew Sullivan's "The Daily Dish" believes she understands why -- and it has to do with a 2004 movie scripted by Tina Fey:

... I just want to point out that women of any intelligence recognize Palin as a female archetype we've had to deal with for years. In modern vernacular, she's a "mean girl," who is ambitious and has no trouble stabbing people in the back to get what she wants. This type of woman is terribly divisive, splitting women between adoring acolytes who want to be "just like them" and women who see clearly what's going on and can't believe that no one else (especially males) can see through it. [...]

[During the VP debate:] You could almost hear a collective embarrassed groan from educated, non-neoconservative women all over the world who have worked their asses off to be taken seriously only to have this bimbo blatantly and on camera attempt to reduce the role of women to their ability to flirt.

How mean is she? How unserious? From The Independent, October 6, 2008:

The "friend of a terrorist" allegation appeared to have scant basis in fact, but succeeded in grabbing the news agenda, suggesting the McCain camp will now make attacks on his opponent's character and personality a key feature of the campaign in the final month of the race for the White House.

What do you think: At this point in the campaign, should SNL put Palin on the show?