Why we love zombies

I made a wisecrack recently that, as far as I can tell, the zombies on AMC's "The Walking Dead" are metaphors for zombies. (Fortunately the show has the sense to hire guest stars like my friend Scott Wilson to add a human dimension to the endless splatter.) Another wise and talented friend, Kathleen Murphy, wrote something about the undying appeal -- and flesh-creeping significance -- of zombies a few years back that, unfortunately, can no longer be found on the web. But she was kind enough to send me the introduction ("It's alive!"), which I happily resurrect from the abyss for you here. Dig in:

In the hierarchy of horror movies, zombies usually come in dead last, behind glam monsters like vampires and demons, witches and werewolves. Ambulatory corpses are rarely pleasant to look at, and it's devilishly difficult to project personality through all that putrefaction, what with your fleshy bits constantly dropping off. Mostly zombies just shamble and chomp, activity that falls somewhat short of the meat-and-potatoes of high-class drama.

No surprise then that movies about the ravenous resurrected are often little more than gore- and munch-fests, designed to appeal to the unsavory appetites of teenaged boys and older, solitary fellows who devour DVDs in their parents' basements. Little substance or subtlety gets in the way of these F/X-heavy banquets of blood and, yes, sex--in the form of naked, busty girls getting knocked off in titillating ways.

Zombies According to Lucio Fulci

Fanboys as smart as Tarantino crave the grisly gruesomes delivered by Italy's Lucio Fulci. In "Zombie," an elegant, apparently unmanned sailing yacht drifts aimlessly past the New York skyline (in shots eerily emphasizing the Twin Towers), as out of place as a racing horse in a traffic jam. Cool opener, but soon forgotten as the plot shifts to some no-name island in the Antilles where zombies drive a huge wood shard into a woman's eye (in CU, natch) and automatically chow down on anything that moves. Still, you've gotta give Fulci props for the scene in which an underwater zombie, deprived of his human meal (a naked girl diver), turns on a great shark, each exemplar of mindless appetite fighting to devour the other.

A dead-faced priest hangs himself in a cemetery in Fulci's "City of the Living Dead,"  loosing all manner of buried sin and retribution in a town built over witch-burning Salem (sic). Nasty zombie action eventuates--reaching into people's heads to pull out their brains, making girls weep blood and spit up their innards. On the scary scale, rotting zombies can't compare to the willies generated by a creepy looking, accused child molester who sneaks into a decaying farmhouse at the midnight hour, the wind howling like a banshee. The dork flings something neon-pink at the wall--and a body suddenly bursts out of the dark. It's just another brand of zombie: a life-size, flesh-colored sextoy! 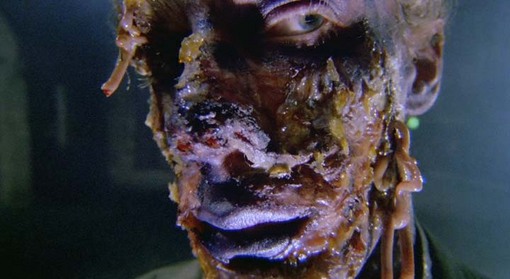 Most of the cinematic gore-machines ("The Grapes of Death," "Tombs of the Blind Dead," "Junk," "Undead," "Re-Animator") sport massively decayed and mutilated, black-blood spewing, boiled-eggs for eyes, gray- or blue-skinned corpses. Thumbs-up (or off?) ratings depend on the flick's gross-out quotient, e.g., severed body parts that won't die; intestine as boa constrictor; zombies cut in half; a face slipped off its skull off as easy as a glove; putting zombies in blender; zombie body applying its severed head to nude woman's body; ad nauseam.

But what about zombie movies that transcend the monotony of Grand Guignol, flicks that invite us to confront the reasons we are so fascinated with re-animated, rotting, cannibalistic corpses we go back for seconds...and thirds?

Why We Love Zombies

The best horror fiction delights in disinterring the stuff we've buried down in the darkness behind the brain, exposing the scary shadowside of how we live, what we believe and feel. Going to the movies to get scared stiff by blood-suckers and flesh-eaters can be as cathartic as dreaming: if we face our baddest selves and worst fears in these mad-house mirrors, we can acknowledge their power and give them proper burial--so they don't come out to play for real. 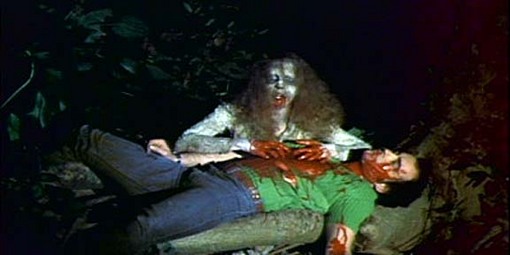 Zombie movies tap into our primal fear of the dead, our dread that the deceased might get so hopping mad at being cut off from life and light, they could return to take revenge on the living. In "Children Shouldn't Play with Dead Things" a bunch of shallow 70s hipsters desecrate a cemetery, using an old man's corpse as a plaything.

The sociopathic leader of the gang disses man as "a machine that manufactures manure" and dubs the dead quintessential "losers." Shot on a shoestring budget, amateurishly acted, with a barely functional script, "Children" still mines authentic horror out of careless nihilism that reduces both the quick and the dead to "meat"--and makes the world a slaughterhouse for ravening zombies.

We turn to religion to make us more than meat, by promising immortality, resurrection of the soul. Until Rapture, let's keep dead bodies down in the ground while they rot away--who wants to be reminded of sinful, transient flesh? We'd rather keep our eyes raised to heaven, home to pristine angels, than gaze downward, where Mother Earth treats our flesh like so much fertilizer. 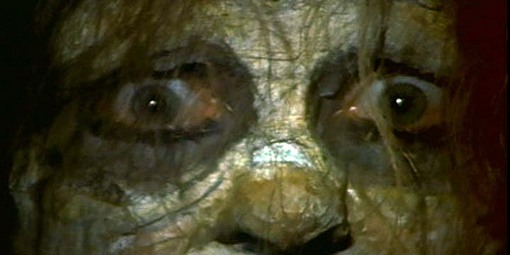 From the start, we've ritually sacrificed and consumed our gods in hopes of guaranteeing everything from good crops to immortality. Zombie movies turn such hopes topsy-turvy, making an awful mockery of our appetite for divine flesh and blood. Instead, our dead--bad seeds--rise to make food of us, enabling them to shamble on forever in a grotesque imitation of life.

Sometimes this gruesome resurrection packs a double whammy: zombies rub our noses in the horror of the physical decay we can never escape, no matter how much time we spend at the gym, while mocking the way we often trudge through regimented days, pursuing health and wealth on the treadmill of our lives. The superbly satirical "Shaun of the Dead" (2004) mines hilarity out of zombified human behavior before Z-Day hits. Shaun's deadpan stepdad comes to emotional life only as he slips into true zombiehood, and his sweetly addled mum so often wears such a vacant look it's hard to tell whether she's jumped the grave. 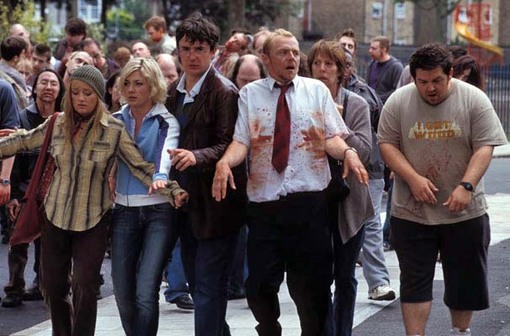 But in these parables from the darkside, we are often of two minds. We want the dead to go away, to stay down where they belong. And no matter how much we crave to live forever, there may come a time when we wear out and want to rest. How awful is the thought that we might find ourselves creaking and crawling back to half-life, driven to endless, unsatisfying consumption? Think of George Romero's mall-seeking zombies in "Dawn of the Dead" (1979) or the pathetic corpses in his "Land of the Dead" who mindlessly ape the lives they used to lead in Smalltown, USA.

On the other hand, who hasn't, in the throes of grief, dreamed of bringing a lost loved one back to life? ...

For Kathleen's roundup of zombie favorites, from Jacques Tourneur to Joss Whedon, as well as other horrific creatures of the night (witches, vampires, satanspawn, werewolves, ghosts, etc.) go here. 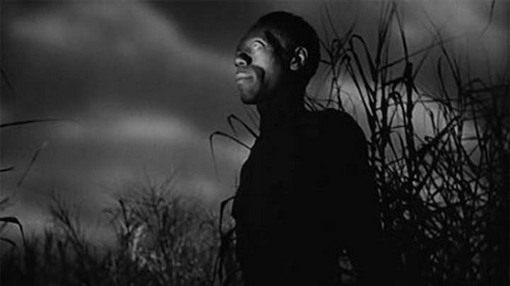