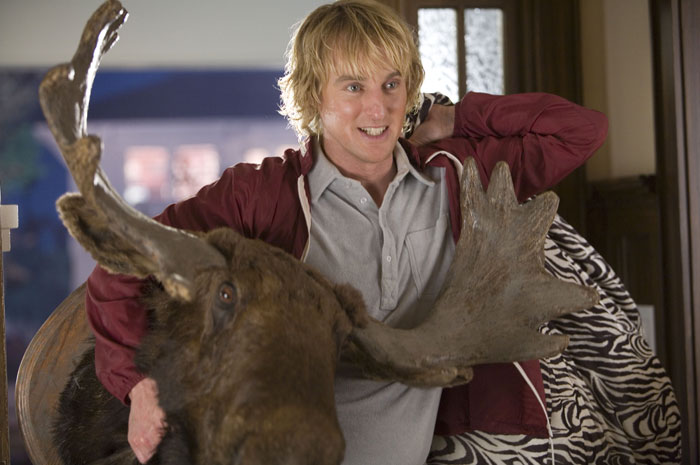 A couple days ago we published an Opening Shot contribution for Woody Allen's "Annie Hall" in which Allen cited an old joke to illustrate a point about his view of life:

Two elderly women are at a Catskills mountain resort, and one of 'em says: "Boy, the food at this place is really terrible." The other one says, "Yeah, I know, and such small portions."

I couldn't help but think of that when I saw the open letter Steely Dan's Donald Fagen and Walter Becker posted on their web site ("Open Letter to the Great Comic Actor, Luke Wilson"). Be sure to check out the groovy Residential Suites at Longworth stationery: "Where Value is King... And So Are You!"

Fagen and Becker address their open letter to Luke to complain about his brother Owen's movie, "You, Me and Dupree," which they say is a bad movie that they think Owen should have thanked them for, because they think the story (and title) resemble their song "Cousin Dupree," off the "Two Against Nature" album. "Cousin Dupree" is about a guy who... well, let them put it in their own words:

Anyway, they got your little brother on the hook for this summer stinkbomb -- I mean, check the reviews -- and he's using all his heaviest Owen C. licks to try to get this pathetic way-unfunny debacle off the ground and, in the end, no matter what he does or what happens at the box office, in the short run, he's gonna go down hard for trashing the work of some pretty heavy artists like us in the process. ... I mean, we're like totally out in the cold on this one -- no ASCAP, no soundtrack, no consultant gig (like we got from the Farrelly Bros. when they used a bunch of songs in their movie, "You, Me and Irene" or whatever). No phone call, no muffin basket, no flowes, nothing....

But, hey, luke, man -- there is one petite solid you could do for us at this time -- do you think you could persuade your bro to do the right thing and come down to our Concert at Irvine and apologize to our fans for this travesty?

OK, I can see some similarities between one Dupree and the other -- especially the ramblin' nature of the character, the sleeping on the couch, and all that.

But, frankly, I think Owen Wilson's Dupree is even more like the out-of-place "special friend," the unwelcome guest who will not leave, who is the title character of the Dan masterpiece "Gaucho":

Can't you see they're laughing at me Get rid of him I don't care what you do at home Would you care to explain...

Who is the gaucho amigo Why is he standing In your spangled leather poncho And your elevator shoes Bodacious cowboys Such as your friend Will never be welcome here High in the Custerdome...

No he can't sleep on the floor What do you think I'm yelling for I'll drop him near the freeway Doesn't he have a home...

UPDATE: Discussion of various interpretations of "Gaucho" (any or all of which work) here. Best of all: "It's obvious that the singer is berating an acquaintance (a roommate or other such cohabitant?) for his association with some poseur, a lightweight, freeloading hipster fraud who's long overstayed his welcome. Beyond that, though, we know nothing. Who are these characters? What are the circumstances of their involvement? What is the Custerdome? In the end, of course, it doesn't matter, because we're hearing a snippet of a diatribe from one character to another, and that's all we're supposed to be hearing."

Darth Vader goes all Sybil on us...